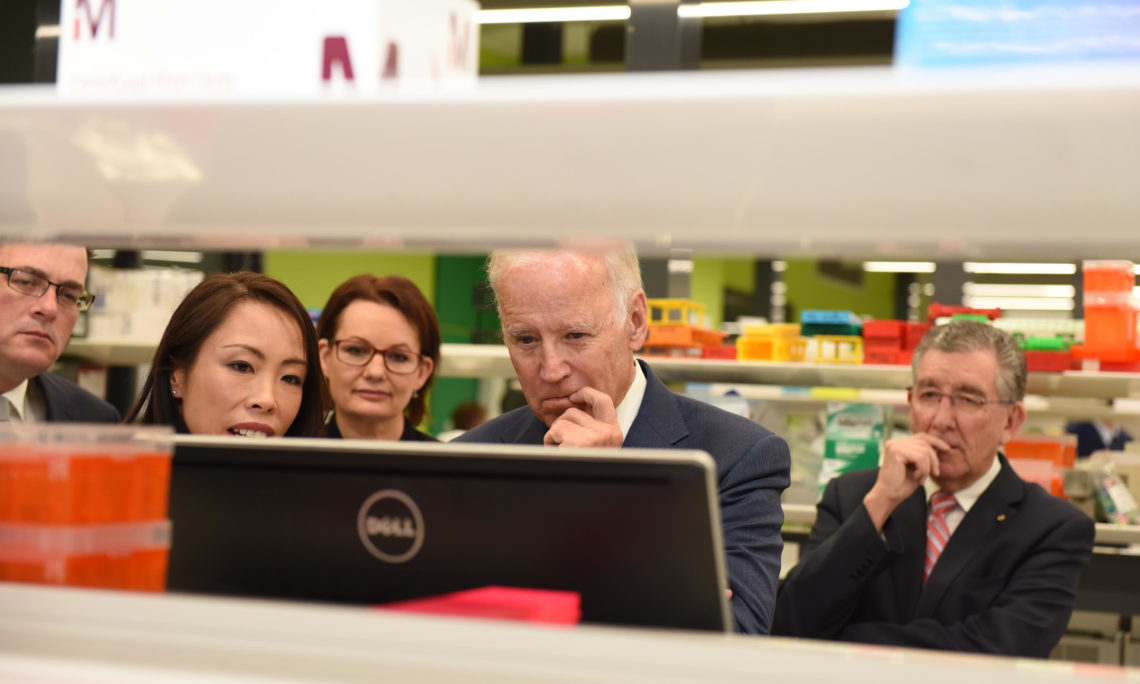 Today, Vice President Joe Biden announced the signing of three Memoranda of Understanding (MOUs) that will make available an unprecedented international dataset to advance cancer research and care.  An MOU between the National Cancer Institute (NCI) at the National Institutes of Health (NIH) in the United States, and Macquarie University (MU), Children’s Medical Research Institute (CMRI), Garvan Institute of Medical Research (GIMR), and Bioplatforms Australia Limited (BPA) in Australia will facilitate scientific collaborations in the field of clinical proteogenomic studies and their translation to cancer care (the study of genes and their protein products, their role in cancer development and progression and possible targets for therapies).   Additionally, the State governments of New South Wales and Victoria have signed separate MOUs with the U.S. NCI that will create a general framework of collaboration for promoting and conducting high-quality research and data-sharing to strengthen the evidence base necessary for cancer prevention, treatment, and management.

By aligning efforts through these MOUs, an unprecedented international dataset will be made publicly available and data will be contributed as soon as it is available for use by cancer researchers and physicians around the world – with an expected minimum of 8,000 patients in the United States and 50,000 Australians by 2021.

These agreements will establish a new collaboration to facilitate the sharing of cancer‐associated clinical research data, genetic and other molecular information (DNA, RNA, and protein), targeted tests, and subsequent public dissemination of products and data to the research community.   The MOUs between the U.S. NCI and the Australian state governments of New South Wales and Victoria will establish joint steering committees that will meet at least one a year to develop strategic plans for collaboration, recommend areas and topics for joint workshops, develop collaborative research project solicitations, facilitate the expedited review and clearance of collaborative proposals, and foster other joint activities to advance research on cancer.

As a testament of continued support of clinical proteogenomics, the government of New South Wales is set to announce during the Vice President’s visit an additional investment of $6 million dollars (AU) and the Victorian Cancer Agency will announce a new U.S./Victorian Cancer Fellowship program that will provide support for up to four senior researchers a year to the United States to conduct cancer research in areas including, but not limited to, cancer proteogenomics.

On his recent trip to the Vatican, Vice President Biden issued a call for an international commitment of all developed nations to consider renewed and focused cancer investments in ways that improve patient outcomes by creating publicly accessible sets of research and patient data, including those data sets that can represent the global diversity of populations, people, and cancers.

Vice President Biden has travelled to a number of leading cancer centers in the United States and to venues around the world to engage experts throughout the community – researchers, oncologists, patients and patient advocates, industry leadership, and data and technology experts, among others – in conversations about cancer.  Through these conversations the Vice President identified the barriers and opportunities that he could most usefully take on as part of an initiative known as the Cancer Moonshot.

Purpose and Scope of the Collaboration

The purpose of these MOUs is to facilitate scientific and programmatic collaborations between research agencies and institutions in the United States and Australia for basic and clinical proteogenomic studies and their translation to care.  This will build upon  the recently launched U.S. Applied ProteogenomicsOrganizationaL Learning and Outcomes ‎(APOLLO) network and Australia’s Proteome of Human Cancer.

The specific areas covered by the collaboration include three distinct areas:

Following the blueprint from the U.S. Clinical Proteomics Tumor Analysis Consortium, researchers will develop sites that collect high-quality, clinically annotated, primary, and untreated tumor specimens from patients with specific cancer types in order to improve the understanding of the proteogenomic (both the genomics of the tumor and the expression of those genes as proteins) complexity of tumors. This focus will improve the understanding of tumor resistance and/or toxicity to therapy and the ability to predict treatment response by examining drug response or toxicity.  Researchers will use proteogenomic signatures that support an increased understanding of tumor biology with the potential of facilitating the identification of which treatments can be used to target a specific patient’s tumor.

Researchers will develop and utilize innovative data analytic tools to analyze growing proteogenomic datasets. The algorithms and software from these projects will be made open source.

Preparation and Training of the Proteogenomic Research Workforce:

This agreement includes a program to train and exchange scientists with expertise in proteogenomic data, including training in working with clinical healthcare data and registry data and integration with analysis of molecular data.

Dissemination and Sharing of Information:

To the extent permitted by applicable law, regulation, and policy, resulting products and data will be made public to the research community upon the main manuscript being accepted for publication.  Where applicable, scientific findings will be published jointly involving individuals from each institute.