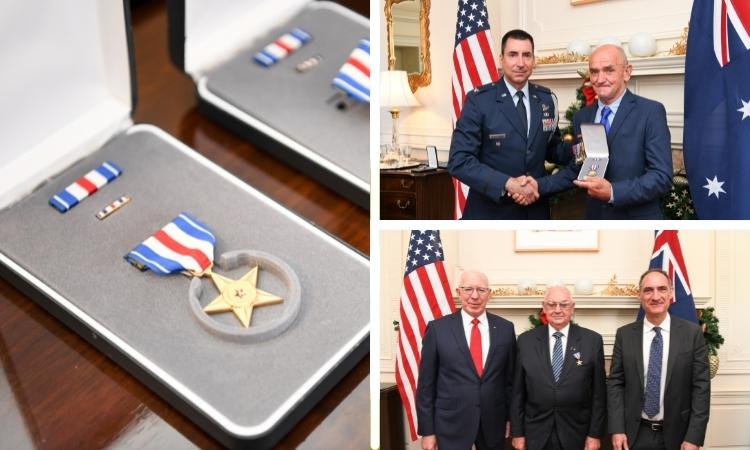 The Silver Star is the third-highest military combat decoration that can be awarded by the United States.  Of the approximately 23,000 Silver Stars awarded in Vietnam, only six recipients have been members of the Australian military. 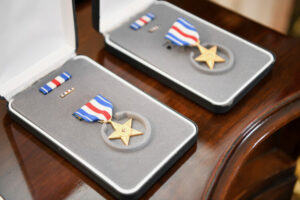 Then-Flying Officer Macaulay Cottrell distinguished himself by gallantry in connection with military operations against an opposing armed force as Forward Air Controller directing fighter aircraft near Lai Khe, Republic of Vietnam on 10 Jun 1968. On that date, Flying Officer Cottrell disregarded  intense hostile ground fire and adverse weather conditions to successfully pinpoint the unfriendly positions for combat support missions.   The great bravery and devotion to duty shown by Flying Officer Contrell is a credit to him and  the Royal Australian Air Force.

“The Silver Star medal is a highly significant award honoring remarkable acts of service”, said Charge d’Affaires Goldman. “Group Captain Cottrell and Warrant Officer Wheatley are being recognized for their actions during the Vietnam conflict, while serving with U.S. military units. Both Officers illustrated remarkable bravery and sacrifice”

“The service and sacrifice of our Australian counterparts is not lost on us, nor is the camaraderie and mateship we have long found in you”, said Michael Goldman. “The U.S.-Australia Alliance – and the strong democratic values at its core – is an anchor for peace and stability in the region. It will continue to deliver for Australians, Americans, and our friends and partners throughout the world. And it will do so because of men and women like Group Captain Cottrell and Warrant Officer Wheatley, who we have the honor of recognizing today.”