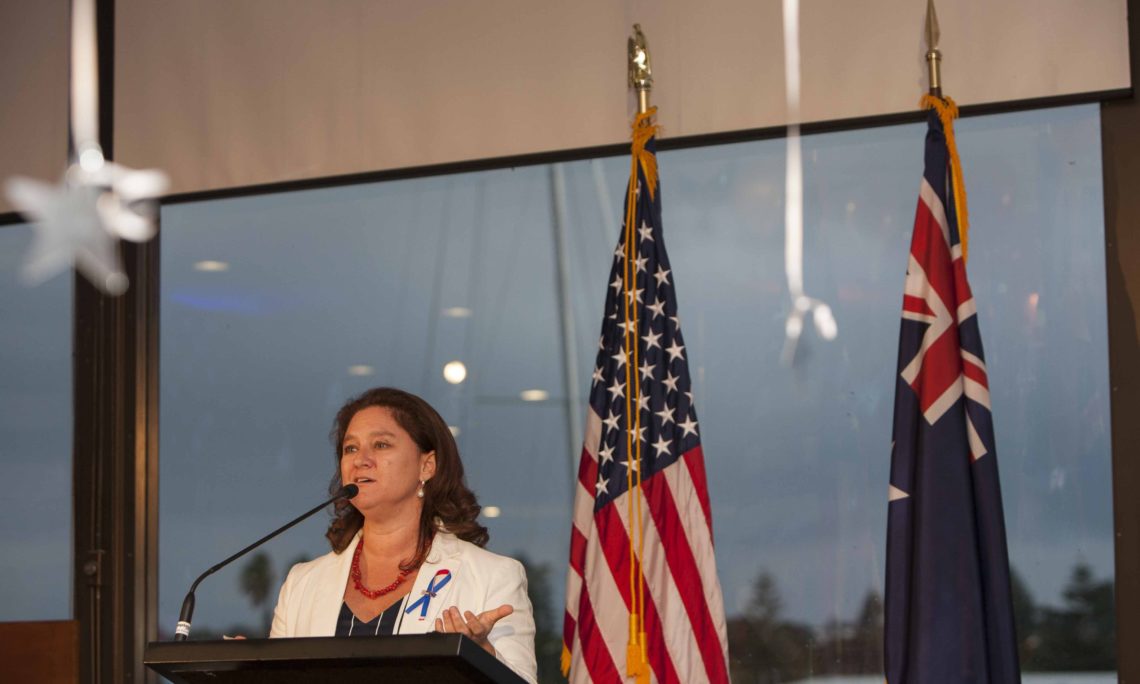 “The fantastic people of Australia have taught me about being mates, and I’m very much looking forward to our next 100 years of mateship.” - Consul General Rachel Cooke.

WHEN asked about the United States’ relationship with Australia, you need look no further than WA to see the alliance is all around us. We’re partnering in boardrooms and in battle, in outer space and the outback, and in research and recreation. And in WA, we’ve been doing so since 1886.

As the US celebrated Independence Day this week, we also commemorated our enduring friendship with Australia. July 4, 2018, marked 100 years of mateship, the 100th anniversary of the first time our troops fought side by side and, for Americans, the first time we were led by a foreign commander. General Sir John Monash led our combined troops at the Battle of Hamel on France’s Western Front.

The ties between our people have become stronger every day since.

About 30,000 US citizens call WA home – my husband Martin and I included. American businesses are tightly woven into the State’s economic and social fabric. Exxon Mobil and Chevron have invested billions of dollars in WA, leading to $60 billion in contracts to more than 600 local companies and 19,000 construction jobs. Alcoa has operated in regional WA for 50-plus years, employing more than 4000 people and replanting native forests in every location.

US company Albemarle is a key force behind the world’s largest lithium mine at Greenbushes in WA’s South West. Lithium is a vital element for the 21st century’s most groundbreaking products, such as electric cars, smartphones and renewable energy systems. US investment is helping WA stay at the forefront of this booming industry.

An exciting new era is upon us, with States and Territories bidding to host the Australian Space Agency.

The US and Australia have been partners at this final frontier for more than 60 years. Tracking stations in Muchea and Carnarvon played a crucial role during NASA Apollo and space shuttle missions and who could forget American astronaut John Glenn famously dubbing Perth the “City of Light” in 1962?

While mining and Moon landings may not seem related at first, both involve operating remotely in extreme environments. One of only five NASA humanoid robots in the world is at Woodside’s Perth headquarters. The “robonaut” is on a five-year loan as the two parties work to develop ways for operating more safely and efficiently.

The US-Australia relationship is also developing the next generation of leaders. Every year, hundreds of WA students attend American universities, providing a valuable exchange of knowledge, networks and ideas. Forty girls from Penrhos College recently attended a five-day space camp in Alabama and were impressed by the range of STEM career opportunities.

In sport, Perth Heat, Perth Glory and Perth Wildcats all welcome American players – I love going to their games and am excited the Wildcats will soon play against two NBA teams.

Best of luck to you all.

These young people are our future global citizens in an increasingly interconnected world. And WA, due to its geographical position, is uniquely placed in a region of growing global importance.

We’ve partnered with Australia in the Indian Ocean for decades and continue to do so. Right now, Australians and Americans are conducting joint research on how Indian Ocean currents affect monsoons and our two navies are among the 25 countries training together in the world’s largest maritime exercise, the Rim of the Pacific.

So while we celebrate America’s independence, we also acknowledge that no country succeeds in isolation.

The fantastic people here have taught me about being mates and I’m very much looking forward to our next 100 years of mateship.