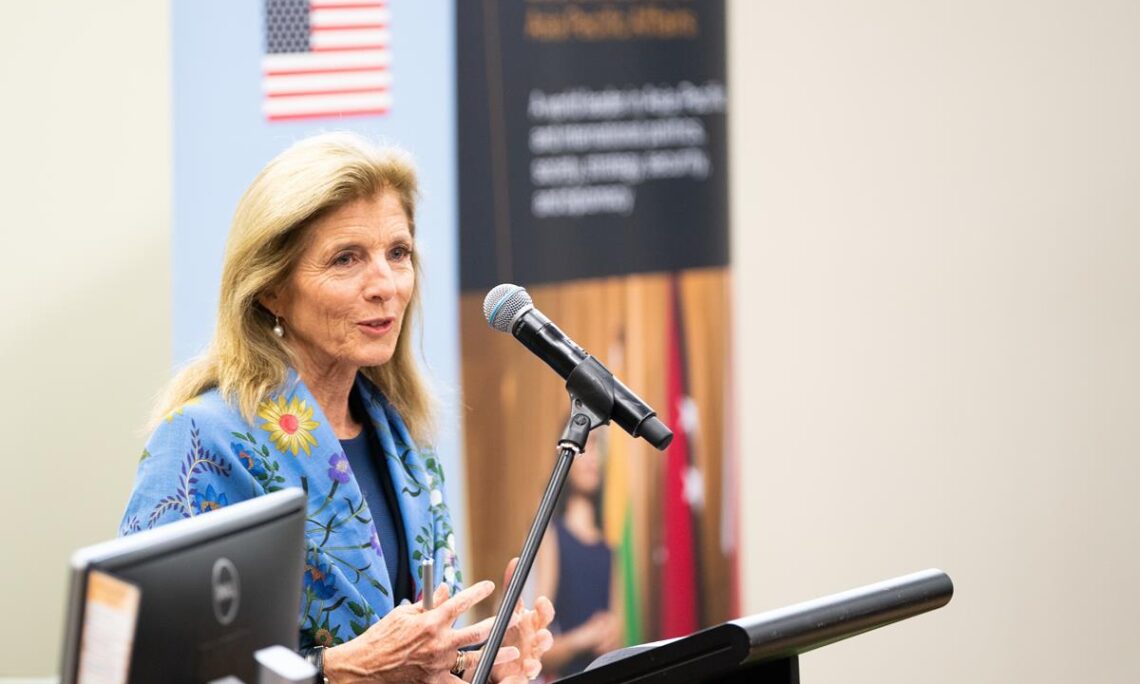 Ambassador Kennedy:  Thank you so much. Thank you all.

It is such a great honor to represent the United States of America here in Australia, and I can’t think of any place more important — I had a wonderful time in Japan, but this is a moment of opportunity for our two nations.

Before I go any further, I do want to also acknowledge the Traditional Owners of this land.  And yesterday we were here for a tour of ANU, and were able to be welcomed and participate in a really meaningful and significant ceremony by Paul House. So we, my husband and I, are extremely grateful for the welcome that we have received [and] what we’ve learned, both at the Garma Festival and through other ceremonies, about the respect for the land, the lessons that we all should learn — and there is no issue that is more relevant and more connected to those lessons than the issue that we’re talking about today, which is climate change.

I’ve had the great privilege of accompanying the next speaker for the last two days, and he is the Deputy Special Presidential Envoy for Climate.  He is, I would say, the most knowledgeable person that I’ve ever met on this issue, and I am now incredibly knowledgeable as well, but he is really — you are going to have a great time here.

So I encourage you to ask him as many questions as you can, and I know that you will also learn a tremendous amount.  He will tell you, but I just wanted to say personally how proud I am to serve the Biden-Harris Administration, who has made such an incredible commitment to the issue of climate change and has achieved significant historic legislative milestones to advance the United States’ progress towards our climate goals of reducing our emissions by 2050 fifty percent.  I mean 2030.  So he knows all that.  And so you are going to be able to ask him everything you wanted, ask him about it.

But I will say that I don’t think there’s any issue more important for your generation.  So it’s great to see you all here.  You are the ones that are going to have to take this forward, hold governments accountable, inform yourselves, participate, and enlist your entire generation.

So thank you so much for taking the time to come here today.  I look forward to continuing this discussion, to coming back to ANU whenever you invite me, and I’d like to turn it over to our special guest, Rick Duke.

Deputy Special Presidential Envoy for Climate Rick Duke:  Thank you, Ambassador Kennedy.  Thank you to Australia National University.  And thank you to our new colleagues from DQ, where we’ve spent really all of the last day and a half since I arrived in country, digging into what we can do together on climate change and really ran out of time, even with that much work together already.

So I’ll be very brief in remarks in order to leave time for the Q&A, which I think is the most important part of an event like this.  But just to say that my messages are simple.

We have a shared set of conditions and opportunities on climate change between Australia and the United States.  We have very common opportunities to invest in the clean energy transition and on the broader topic of climate progress, and both governments now are in a position where we have put forward the targets required in 2030 and net zero by 2050 in order to be doing our part to ensure that we have realized the promise of the Paris Agreement, and that we are in fact doing what is required to keep warming well below two degrees C, and ideally keep 1.5 degrees C as the warming outcome that we that we will be seeking.

And so with that set of goals in place now with a new commitment from Prime Minister Albanese’s administration to that 2030 Nationally Determined Contribution, and the prior commitment to deliver net zero emissions by 2050, you see that Australia is on a straight line path to that future — to that clean future.

The United States is on a similar path, and the whole of the world needs to be on that same path.  And so what we do, together and individually, will be essential to developing the technologies that will allow us to achieve a clean energy economy.

It will be essential to inspiring other countries to take similar steps, set similar targets, and actually deliver against those targets.  And what we’ve already been able to accomplish in a day and a half here, and what we look forward to following up on in full, is making sure that we have taken advantage of all of our common conditions and aspirations and commitments to work together on everything from research and development, where we have a strong platform to build on between our relevant ministries on research and development across the board and key technologies, but also on the policies required in order to transition to a renewable future with confidence and clarity and to do all the other transitions that are required to electric vehicles and beyond.

But beyond that domestic work and that partnership on our domestic priorities, we have massive common interests and opportunities diplomatically.  And we spent a good deal of this morning working on how we can — Australia and the United States — partner in order to encourage and empower other governments, including in the Pacific and Southeast Asian region, to achieve the same benefits that we expect for our economies, from shipping to cleaner, cheaper energy themselves.

And that is something which the government of India, for example, is very clearly committed to already as its own priority, because they want to deliver a renewables future to their own economy, to their own people.  They set a goal of 500 gigawatts of renewables by 2030.

Which, to put that in context, last year Australia deployed six gigawatts of renewables, which is impressive and important in the context of the Australian economy, puts Australia on the right track to achieve that net zero future.

But India of course, is a much bigger place.  And so India has to actually deliver 500 gigawatts by 2030.  That is their stated intent.

And that’s the kind of country and opportunity where we can work together to try to help countries deliver on that promise together.

So we look forward to much more work together with our colleagues in Australia.  We could not be more enthusiastic about the potential for that work.

And I would be remiss to not make a comment at the outset here about some of what we’re doing in the United States to deliver on our own goals.  And very specifically, we are proud and thrilled that we just passed a comprehensive, transformative legislation, known as the Inflation Reduction Act in the United States.

And we call it the Inflation Reduction Act because when we transition to the clean energy technologies that we need — electric vehicles renewables, heat pumps, etc., we save money for consumers for businesses, and we reduce risk in terms of energy price shocks, and that is what this $369 billion investment that the United States is moving to deliver will allow us to achieve in the United States.  That then opens up all kinds of opportunities to intensify our cooperation with Australia and others on the same agenda and on a global basis.

So thanks for the opportunity to have this discussion today.  And looking forward to the question and answer.