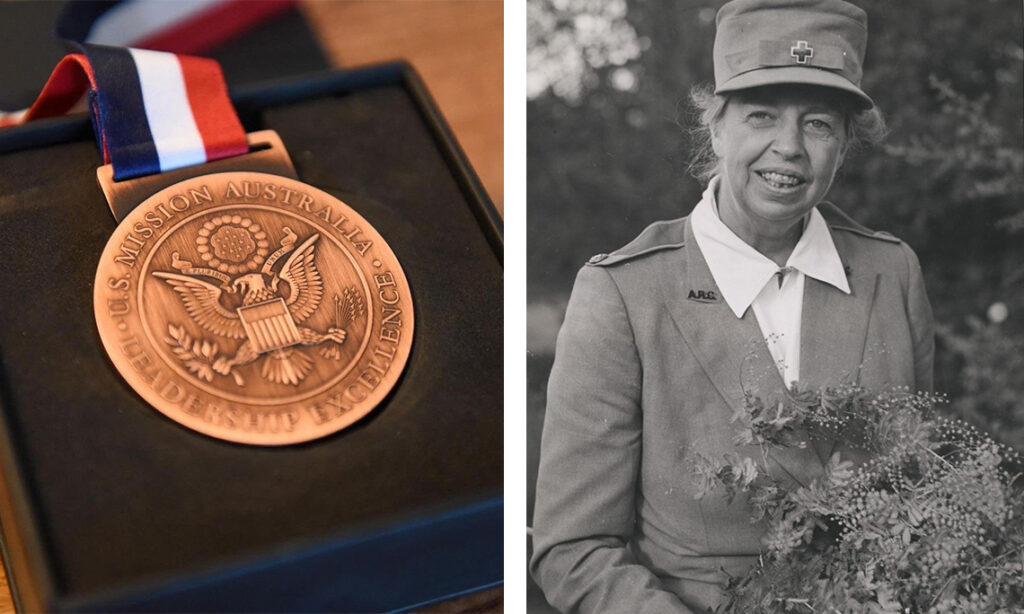 The U.S. Mission Australia Award for Leadership Excellence celebrates the achievements of Australian women leaders who have significantly advanced the U.S.-Australia Alliance.

The award was established in 2018 in honor of the 75th Anniversary of Eleanor Roosevelt’s visit to Australia during the darkest days of the Second World War, and recognizes the significant contribution she made in building diplomatic links between the United States and Australia.

Against the advice of the U.S. War Department, and despite intense political pressure at home, Eleanor Roosevelt undertook a grueling, five-week tour of the South Pacific on behalf of the Red Cross in August 1943.  During her trip, she made seventeen stops, including Bora Bora, Fiji, Samoa, New Caledonia, Christmas Island, Guadalcanal, New Zealand, and Australia, speaking to an estimated 400,000 people throughout.

In September 1943, Mrs. Roosevelt reached Australia.  At this uncertain time in World War II, with the outcome very much in doubt, she formally opened the Chief of Mission’s Residence, reaffirming the strength of the Australian partnership with the United States at the highest levels of leadership.

Inspired by the legacy of this great American woman, the Embassy’s newly-established Leadership Excellence award will recognize Australian women who have demonstrated the enduring character and legacy of Eleanor Roosevelt in support of the U.S.-Australia relationship.

Accompanying the award is a Leadership Excellence medal produced by the Royal Australian Mint that carries the words “The Next 75 Years,” aiming to inspire the next generation of women leaders in both the United States and Australia.