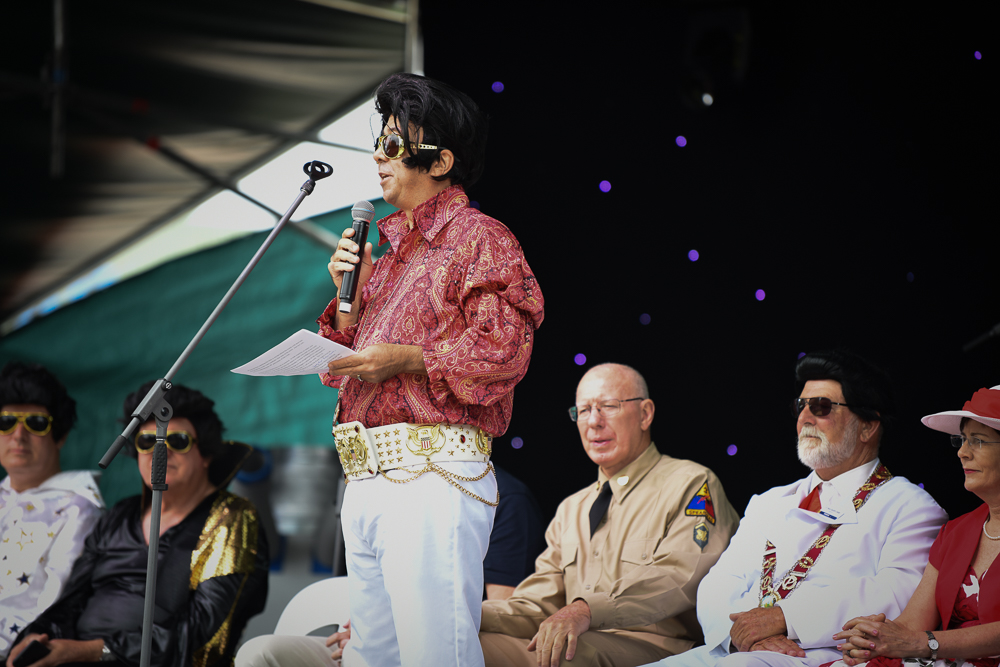 Thank you, thank you very much.

It is truly my pleasure to be here for the 2018 Parkes Elvis Festival—what an experience. I would like to firstly acknowledge: His Excellency General the Honourable David Hurley;

And of course, I also want to start by wishing Elvis a happy 83rd birthday.

I was told an interesting fact recently—that Australia and New Zealand now represent the third strongest international market for visitors to Memphis. A population of fewer than 30 million people, located halfway across the globe, yet you’re the third largest group of people making the pilgrimage to Graceland and the birthplace of rock ‘n’ roll. That’s very impressive. And I think we can safely conclude from this—and from the parade down Clarinda Street—that in the hearts and minds of Australians the King is not dead!

Given that in 25 short years this event has grown from a small gathering of a couple hundred people to become the 25,000-strong, five-day celebration we see here today, no one could really be surprised.

I’m here with you wearing two different hats this week. First and foremost, as my attire suggests, I’m a bit of an Elvis fan; an Elvis aficionado, if you will; and, on occasion, an impromptu Elvis tribute act—we’ll see how the day progresses for that last one. But of course, I’m also an American diplomat, and Parkes holds a particular appeal for those us connected to the U.S.

This town has had what can only be described as a ‘diverse’ relationship with America over the years. About fifty years ago, while Elvis was busy re-establishing himself off the back of the ’68 Comeback Special, Parkes was on the U.S. Government’s radar for a completely different reason—in fact, probably about as different a reason as could possibly be. As we all learned from watching The Dish, it was the behind-the-scenes work done here in Parkes that helped the world watch on as man took his first steps on the moon.

Now I’m fairly sure that at no point in Elvis’ prolific filmography was he ever sent to the moon—although in hindsight, he would’ve cut a fine figure in a blue suede spacesuit. So for those of us looking in, it seems unlikely that many decades later this same town is still thriving on the global stage—this time as home to the Southern Hemisphere’s biggest tribute to one of America’s greatest icons: the King.

It’s strange on the surface, that is. But looking deeper, I think it becomes perfectly obvious why the legacy of Elvis Presley should so deeply resonate in country Australia. He was just a shy, working class boy from Mississippi, but he was passionate and open-minded, and through that he made something of himself. He embraced African American and gospel music, bridging a cultural divide and helping to deliver rock ‘n’ roll to the world. As an 18-year-old kid, he would famously declare that, “I don’t sound like nobody”, and he was right. Elvis presented his audience with this unique and memorable style and a magnetic charisma, and he would transform music as the world knew it. He epitomized the American spirit, and why wouldn’t that strike a chord here in Parkes?

As the world chops and changes around us, this week the King hammers home that America and Australia still hold a lot in common—it’s here where, no matter what your background or your dream, you have the chance to make your indelible mark on the world. And I think some of the more ‘creative’ Elvis interpretations we’ve seen celebrated here today really make my point for me. That’s why the U.S. Embassy is so delighted to be a supporter of this year’s Festival to ensure the King lives on here in Parkes.

Thank you very much to Councillor Ken Keith, the Parkes Shire Council and the people of Parkes for having me here in the Elvis Capital of Australia this weekend. Congratulations on what has again been a rock ‘n’ rolling success—and I can now say, in the words of the King: you have made my life complete and Parkes, I love you so.