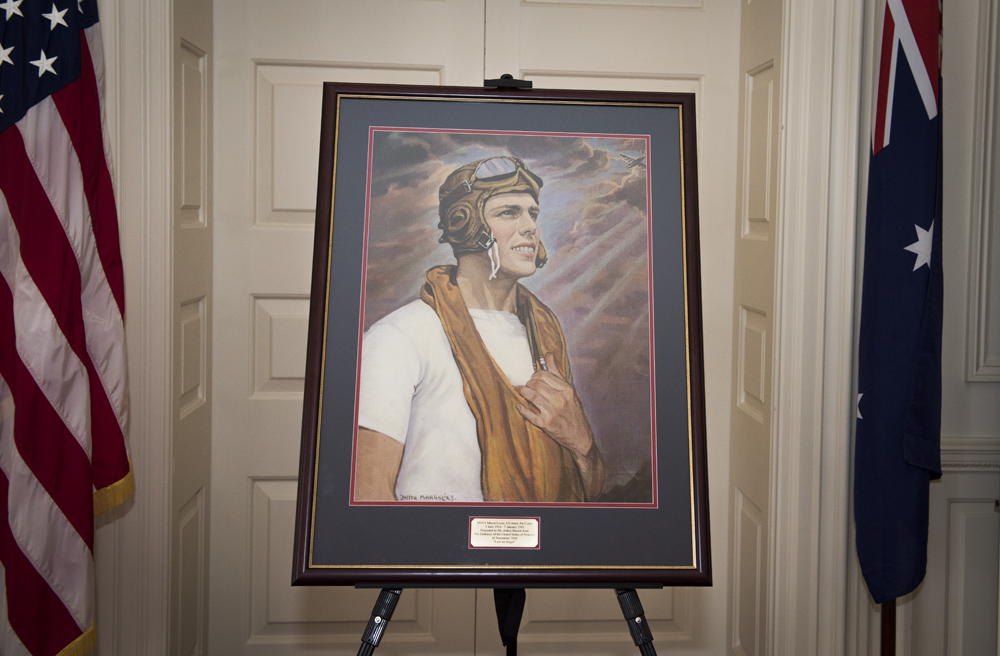 We have a special Veterans’ Day moment we’d like to share from our U.S. Embassy family here in Canberra.

Yesterday we presented a framed portrait of U.S. veteran MSgt Meyer Levin to his son – an Australian – Arthur Barrett.

MSGT Meyer Levin was a B-17 Bombardier that served in the Pacific during World War II.  Just three days after the attack on Pearl Harbor, Levin became the first American to blow up a Japanese warship while serving as bombardier for another war hero, Captain Colin Kelly.

In late 1942, Meyer delivered a B-17 to Melbourne, Australia for maintenance, and his son Arthur was conceived during that visit. Sadly, Arthur never met his father.

Not long after on January 7, 1943, Levin was killed in action over the Pacific during a spotting mission against the Japanese navy when his plane ran low on fuel and was forced to crash land into the Pacific.  Levin saved his crew by deploying the life raft, but could not save himself and went down with the plane. That was seven days before Arthur was born.

For his heroics in battle, MSGT Levin was awarded a Distinguished Flying Cross, three Silver Stars and the Purple Heart, and posthumously promoted to Lieutenant. In 1948, a portrait of MSgt Meyer Levin was commissioned and presented to the Secretary of the Air Force and US Attorney General.  The portrait was displayed in the Pentagon “Hall of Heroes” for some time, and remains a part of the official USAF art collection.

We were so proud to host Mr Barrett, his wife Joy and their family yesterday to celebrate a true American war hero. In a touching moment, Arthur shared his family’s journey of discovery with us – recounting Joy’s research efforts and viewing film footage of a dashing MSGT Levin.

The brave men and women of the U.S. and Australian militaries, past and present, are the beating heart of our alliance.  Today, tomorrow, and every day, we honor them with our gratitude and our respect.