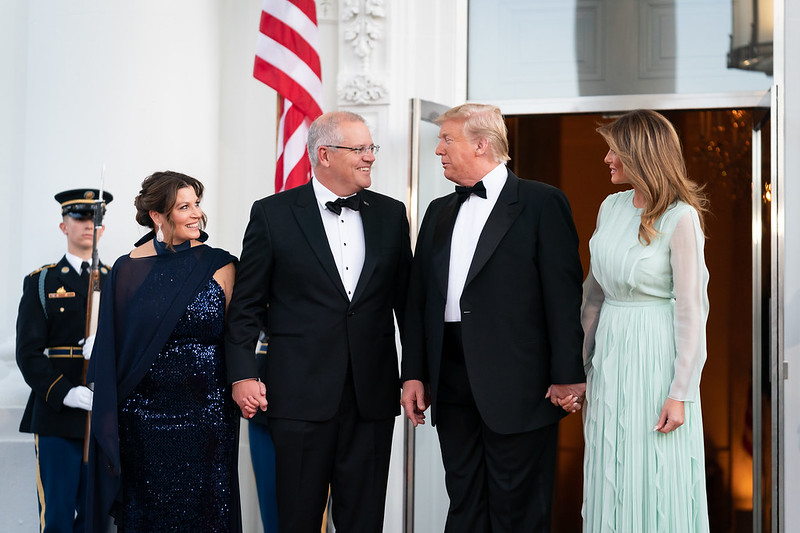 PRESIDENT TRUMP:  Prime Minister Morrison, Mrs. Morrison: Melania and I are immensely honored to host you and the entire Australian delegation for a State Dinner in the historic Rose Garden.  I want to thank America’s magnificent First Lady for this truly exquisite evening.  Thank you very much to Melania.  She worked hard.  Thank you.  (Applause.)  Great job.

Tonight, we celebrate more than a century of loyal and devoted friendship between the United States and Australia.  Both of our nations are blessed by the uncommon courage, unfailing commitment, and unyielding character.  Our two countries were born out of a vast wilderness, settled by the adventurers and pioneers whose fierce self-reliance shaped our destiny.

The first settlers carved out a home on the frontier and forged our defining national traits.  Americans and Australians hold within our hearts a great love of family, a profound allegiance to our fellow citizens, a deep respect of law and liberty, and a determination to protect our independence at any cost.  It is this free and proud spirit that has always driven our people to imagine, to build, to achieve what others never even dreamed possible.

From the wide-open landscapes of the West and the Outback rose up cowboys and sheriffs, rebels and renegades, miners and mountaineers.  Against incredible hardships, our people have produced abundant harvests, pushed the bounds of science and exploration, and created timeless masterpieces of art, music, and culture.  The defiant spirit of our people has also armed our nations with the strength to overcome any foe that dares to trample on our sovereignty, threaten our citizens, or challenge our freedom.

This evening, we honor every Aussie and American hero who has paid the supreme sacrifice so that we might live in safety and in peace.  In June of 1940, during the Second World War, a renowned Australian writer published a song in the Australian Women’s Weekly.  The song rallied the entire nation and it remains an inspiration to patriots everywhere.  Its lyrics are now printed on Australia’s 10-dollar banknote.

The poem concludes by reminding the world that Aussies will always defend their cherished homeland.  And it says:

“We are the sons of Australia,
of the men who fashioned the land;
We are the sons of the women
Who walked with them hand in hand;
And we swear by the dead who bore us,
By the heroes who blazed the trail,
No foe shall gather our harvest,
Or sit on our stockyard rail.”

As many of our friends with us here tonight know well, the acclaimed Australian author who penned these beautiful lines was Dame Mary Gilmore, and her great-great-nephew is Prime Minister Morrison.  (Applause.)

PRIME MINISTER MORRISON:  Thank you.  That was beautiful.

PRESIDENT TRUMP:  Prime Minister, on behalf of all Americans, our entire country: We are grateful that you carry on this noble legacy.  We give thanks to all the sons and daughters of Australia who have toiled and sacrificed for a strong, vibrant, and sovereign nation.

So, this evening, I offer a toast to the Prime Minister and Jennifer — thank you Jennifer — and to every citizen of Australia: May our heroes forever inspire us.  May our heritage always guide us.  May our values always unite us.  And may our nations always remain the home of the proud and the brave and the free.

(A toast is offered.)

PRIME MINISTER MORRISON:  Well, he got me.  Dame Mary, my great-great-aunt, would be very, very proud.

Mr. President, First Lady, Mrs. Trump: Thank you so much, Mrs. Trump, for the amazing night you’ve created for us here.  Ladies and gentlemen, friends: Jenny and I are truly grateful for this wonderful honor and the hospitality that you, Mr. President and the First Lady, have extended to us and to our country as we join you here tonight in the home — your home — and that of the American presidency.

This of course was once the house of President Teddy Roosevelt, who I’ve always greatly admired.  He was also a New Yorker.

PRIME MINISTER MORRISON:  He was also unconventional.  (Laughter.)  He was no captive of the establishment.  He was also accomplished; indeed, some might say, a maverick.  But he was his own man.  He was a doer.  And above all, he was inspired by the great character of the American people.  There is nothing he believed his nation could not do.  And this is the heart of American greatness.

Mr. President, your belief in America and its people echoes this great spirit of that great President, and it’s backed up by you life’s experience and the passion and work of your presidency.

And, Mrs. Trump, your kindness, warmth, and quiet grace in the welcome to Jenny and I, and especially here tonight has been very special and, as Jen has said, very sweet.

General Washington once said, “It is infinitely better to have a few good many than many indifferent ones.”  The same is true in the friendship of nations.  Australia will never be accused of indifference in our friendship to the United States.  And tonight, Mr. President, we are reminded that the United States feels the same way, especially under your leadership.

I’ve noticed tonight the Marines who are on duty tonight, and I thank you for your service, but not just to the United States, but to our alliance as well.  In 1943, the U.S. Marine 1st Division was engaged in the first-ever, large-scale U.S. offensive against the Japanese at Guadalcanal.  At the same time, Australian forces were in New Guinea, also locked in the fiercest of battles against the Japanese.

We both prevailed — each doing our bit, each carrying our own weight.  When the U.S. Marine 1st Division arrived in Melbourne after six months of heavy fighting, they were welcomed with a rendition of the Australian fake anthem, “Waltzing Matilda.”  More than 75 years, later, the 1st Division still plays “Waltzing Matilda” whenever they ship out.

It’s true, Mr. President: We have been in a lot of battles.  But we have also stood together to realize the dividend of peace — of peace: prosperity that comes from our embrace of enterprise and free markets and the rule of law, our great immigration societies, education, liberal democracy, and a commitment to the fulfillment of human potential.

This has been importantly included in our work together to expand the frontiers of science, technologies, and exploration to reach into space as we first did together 50 years ago, when you launched and we kept Apollo 11 in contact, through the Honeysuckle Project, with Earth.  And we beamed those most famous of images of all time to an enthralled and inspired humanity.  Events that no doubt inspired a young Andy Thomas, from Adelaide, who is with us here tonight, to launch into space on the Endeavor almost 30 years later.

And now we have to do this again, under the vision of your presidency, Mr. President.  Our generation and our times call this great republic and our great commonwealth to live up to the calling of young, free nations to continually point the way to freedom.

In Australia, we’re reminded of this friendship by the great spire with the eagle atop that looks out across our nation’s capital in Canberra.  And earlier today, we gifted a bronze statue of Les “Bull” Allen, an Australian soldier, carrying a wounded Marine off the battlefield on steep slopes in New Guinea in 1943.  For his gallantry, he was awarded the U.S. Silver Star and the Military Medal whilst fighting alongside U.S. troops.

Mr. President, we would be honored if you would permit Australia, as our gift, to erect a life-size memorial of this image here in Washington at a place of your choosing as a constant reminder of our dedication to our American friends and the (inaudible) — and the bonds we have formed.

But for now, ladies and gentlemen, please join me in a toast.

To 100 years of mateship, and to 100 more, to the people of these United States, to the President and his magnificent First Lady, and may God bless America.

PRESIDENT TRUMP:  Thank you very much.  That’s so beautiful.  Thank you.  Thank you, Scott.

I would now like to invite a very special person up to the podium to say a blessing, Reverend Franklin Graham.  Thank you, Franklin.  Thank you very much.  (Applause.)