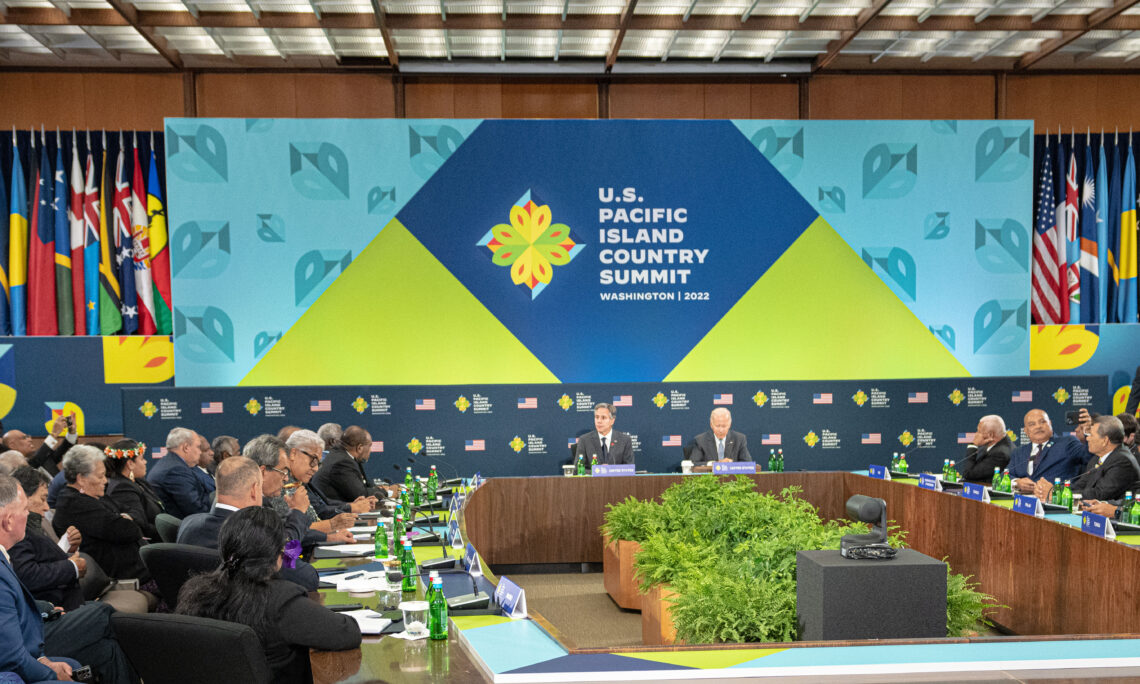 THE PRESIDENT:  Well, I thought we’d give you a break, but they haven’t let in — haven’t let up at all.

Thank you so very much.  Folks, I think this has been — we’ve been looking forward to this for a long time.  And it’s wonderful to welcome you all for the first time together, leaders of the Pacific Islands, in Washington.

You know, this summit honors the deep history that our nations share and a longstanding trade and diplomatic relationships, and a — and a shared fight to defend freedom.

And the sacrifices we made together, the partnerships between our — among our peoples helped bring an end to the bloody war in the Pacific during World War Two.  And recently, we honored the 80th anniversary of the Battle of Guadalcanal at a memorial in the Solomon Islands.

So, this summit is also about deepening our enduring commitment to each other and our shared future; our commitment to tackling the climate crisis, which threatens all of us.  We’re seeing the consequences of climate change around the world very vividly, including in the United States right now.  And — and I know your nations feel it acutely.  And for you all, it’s an existential threat.  It’s an existential threat.

And we’re also committed to working together to equitably rebuild the global economy in the wake of COVID-19 and Russia’s war — you know, to ensure an Indo-Pacific region that’s free and open, one that is stable and prosperous, and resilient and secure.

A great deal of the history of our world is going to be written in the Indo-Pacific over the coming years and decades.  And the Pacific Islands are a critical voice in shaping that future.  And that’s why my administration has made it a priority to strengthen our partnership with your countries and with the Pacific Islands Forum.

I was honored to be the first U.S. President to address the forum last year.  And Vice President Harris shared our vision for cooperation with the Pacific Islands Forum at — at your leaders meeting.

That’s why this historic summit — at this historic summit we’re making additional and concrete commitments.  And we’re launching our Pacific Partnership Strategy, the first national U.S. strategy for Pacific Islands, which is a key component to our broader Indo-Pac- — Indo-Pacific strategy.

We’re also announcing more than $110 million [$810 million] in expended [expanded] U.S. programs to improve the lives of Pacific Islanders, which includes more than $130 million in new investments to support climate resilience and to build sustainable blue economies in the Pacific Islands; prepare for climate impacts on public health and food security, and to strengthen sustainable development; and also to build a better early warning capacity to predict, prepare for, and respond to climate hazards.

This is going to build on approximately $375 million in climate programs we currently have in the region.

And we look forward to successfully concluding negotiations for a Compact of Free Association with three of our closest partners in the region — the Federated States of Micronesia, the Republic of the Marshall Islands, and the Republic of Palau.

The United States is committed to consulting with all of you and engaging collaboratively at every turn, because it’s very much in our interest as well as, I hope, yours.  That’s what this summit is all about.

And with your permission, I’d also like to briefly address the shameless and transparent effort by Russia to annex parts of its neighbor, Ukraine.

This so-called referenda was a sham — an absolute sham — and the results were manufactured in Moscow.
And the — the true will of the Ukrainian people is evident every day as they sacrifice their lives to save their people and maintain the independence of their country and in defense of freedom as well.

Russia’s assault on Ukraine in pursuit of Putin’s imperial ambitions is a flagrant — a flagrant violation of the U.N. Charter and the basic principles of sovereignty and territorial integrity.

I’m grateful to the Pacific Island leaders for standing up for these basic principles and for your strong, moral leadership on global issues at the United Nations.

But all kidding aside, I’m looking forward to seeing you tonight.  And I’m going to turn it over to Secretary Blinken.