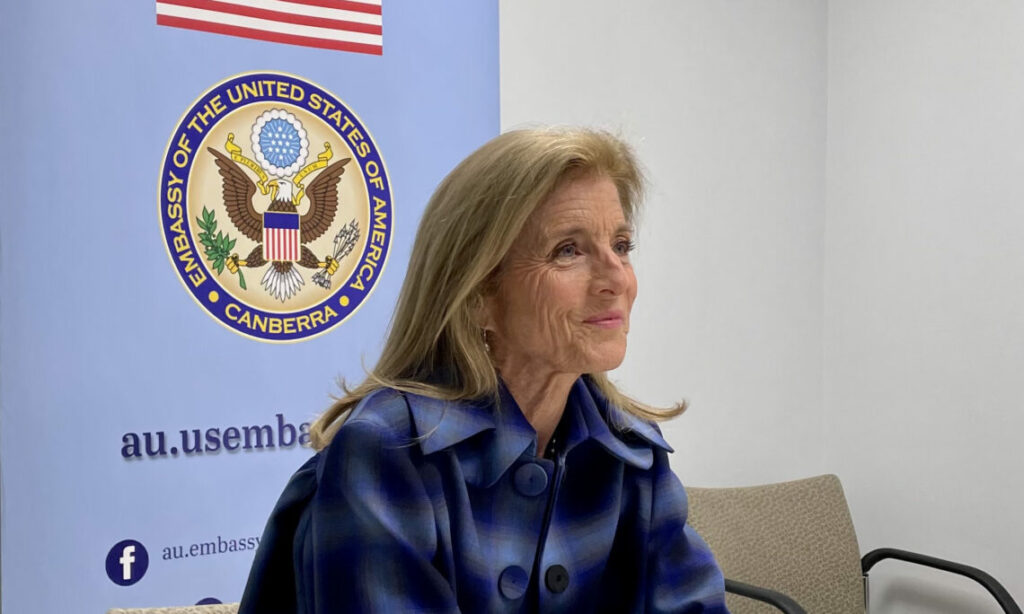 Thank you so much. Thank you, everyone, for tuning in. This event couldn’t be happening at a more significant moment, given that over these two weeks leaders from 90 countries and as many as 35,000 delegates are gathered at COP27.

I, too, would like to acknowledge the Traditional Owners and Custodians of the land, sea and skies across Australia, and also thank the members of Indigenous communities who have welcomed me to Country since I arrived here. Today, we’re reminded that this continent was managed and cared for by Indigenous communities for tens of thousands of years. And now it’s our collective responsibility to reconnect to their knowledge, learn from their stewardship, and integrate it more respectfully and successfully into our industrialized societies. And I know that’s part of what the Climate Council is trying to achieve.

I wanted to congratulate Amanda for her influential work, but also to wish her a speedy recovery. And I want to thank you, Dr. Rayner, for stepping in to moderate and being part of the Climate Council’s work and proposing solutions and giving hope to a generation of activists. I want to thank – I want to salute Professor Karoly for your long-standing commitment to combating climate change and having the courage to work both inside and outside of government. Because we really can’t solve this problem without the public and private sector. And I know Dr. Morgan will tell us how much more needs to be done and how we need to get started right now.

Personally, I am honored to serve as President Biden’s Ambassador to Australia. It is the privilege of a lifetime to serve my country, and to represent the United States here in Australia, our closest ally and partner in every global effort, from providing food and energy security to those who are struggling, humanitarian or military aid to Ukraine, and upholding the values of human rights and the rule of law.

I am especially fortunate to have arrived at a moment where great progress is possible because our governments share a commitment to fighting climate change. Voters in both countries elected candidates committed to progress. This trend has continued in the recent U.S. midterm elections. Youth voting has been the biggest driver of this issue ,and it is critical that this generation — the generation that’s most effective — remain the most politically active. Here in Australia, as was said, climate played a major role in the recent Labor Party victory and has improved the perception of Australia in the region.

Domestically, both our countries have recently passed historic legislation. One of Prime Minister Albanese’s first actions was to pass the revised 2030 NDCs and commit to net zero by 2050. Australia just joined the Global Methane Pledge, bringing the total to over 140 countries that have signed on to the most consequential action we can take right now to keep the 1.5-degree target in range. President Biden has passed two major pieces of historic bipartisan legislation, which is not an easy feat in our political system these days—the Infrastructure Act and the Inflation Reduction Act. Among other measures, these laws will invest billions to cap wells, improve infrastructure, increase energy efficiency, and tighten regulations so that the U.S. will reduce methane emissions by 87% below 2005 levels by 2030. The Inflation Reduction Act provides more than — almost $400 billion in incentives for improvements like offshore wind, distributed solar, sustainable aviation fuel, green hydrogen, and will build 50,000 EV charging stations across the United States. It also provides a $7500 tax credit for Americans who buy EVs with batteries made in countries like Australia. So the U.S. is attacking this problem on all fronts.

We ratified the Kigali Amendment to phase down HFCs and committed the U.S. Government, the world’s largest customer, to require our major suppliers to disclose their carbon emissions and set targets in line with the Paris Agreement. Two days ago, President Biden said with confidence at COP27, that thanks to these actions, the United States will meet our emissions targets for 2030.

This achievement is not just an opportunity for the United States. The legislation was written to recognize that the climate challenge is a global challenge, a national security challenge, and an economic opportunity to spur innovation and transform industry in countries that are our partners and allies as well.

No country is better positioned to benefit than Australia. You have the world’s greatest natural resources in these areas, minerals critical to the energy transition, sunshine, wind and open space, world-leading scientists like those who invented the original solar panels a generation ago, and those who are continuing to improve it at the University of New South Wales. I’ve met quantum, AI, and biotech researchers who are leading the global effort in all these fields in partnership with colleagues in the United States. You have mining country–companies that are committed to introducing green hydrogen and achieving carbon zero operations. You have scientists who are designing new kinds of marine living systems. You’re committed, discussing phasing out coal power stations and building the transmission infrastructure to introduce renewables into the grid.

It will take a national commitment, and it will require very tough decisions. But Australia has a chance to lead the world in a clean energy transition, and benefit from doing so. That kind of opportunity doesn’t come along very often. But it won’t happen without the continued advocacy and determination of all the people participating this evening. And many more.

I know that there is sometimes a lot written about how depressing climate change can be and how hopeless it makes people feel. But once in a generation, a moment comes along where real change is possible. And now is that moment. I know because I’ve seen it happen before.

People often say that the environmental movement began when we first saw the photo of Earth from outer space. The space program also began the fields of Earth observation and climate science. It jumpstarted an age of technological innovation that has transformed how we live and allows us to measure how our planet is changing.

That program began 60 years ago with President Kennedy’s Moonshot speech, which committed America to land a man on the Moon. At that time, the U.S. had completed only four short manned space flights. Most of the necessary materials hadn’t been invented, and scientists weren’t sure that a surface landing on the Moon was possible. But my father understood that, that goal would bring out the best in us. It would require imagination, teamwork, and commitment and it would improve the lives of people on Earth. He said we should do it not because it was easy, but because it was hard.

We are in a similar moment now. We’re facing one of the hardest challenges yet. But if we work together, if we believe in collective action and innovation, if we hold our governments accountable, and we use the wisdom of the past to create a better future, we can look back in 60 years and be proud that we saved the life of our planet.