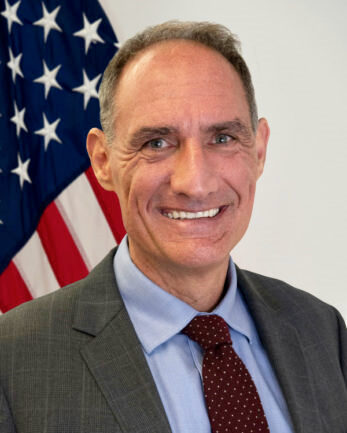 Mike Goldman arrived in Canberra as Deputy Chief of Mission in March 2020. He served as Charge d’Affaires from January 2021 until July 2022, when he resumed responsibilities as DCM. Prior to Australia, Mike spent three years at the U.S Embassy in Suva, Fiji, where he served as Charge d’Affaires (2018-2019) and DCM (2017). A career member of the Senior Foreign Service, Mike joined the State Department in 2000. He recently served in Washington as Deputy and Acting Director for China and Mongolia in the Bureau of East Asian and Pacific Affairs (2015-2017). Previous assignments include Kathmandu (2012-2015), where he was Political and Economic Counselor; Hanoi (2008-2011) and Tashkent (2002-2005) as a political officer; and Taipei (2000-2002) as a consular officer, as well as an earlier stint on the China Desk (2005-2007). He’s the recipient of several State Department honors, including recognition as the Department’s outstanding human rights officer for his work to combat torture and safeguard vulnerable NGOs in Uzbekistan.

Mike earned a Ph.D. and MA in political science from the University of California, Berkeley and an undergraduate degree in international politics from Georgetown University. He completed his dissertation research on a Fulbright scholarship at the Univesiti Sains Malaysia in Penang, Malaysia and has studied at the Chinese University of Hong Kong, Taiwan Normal University, and the State University of Makassar in Ujung Pandang, Indonesia.

Mike speaks Mandarin Chinese, and at one time or another has also been fluent in Nepali, Vietnamese, Russian, and Indonesian. He has three children and is married to USAID Foreign Service Officer Brett Jones