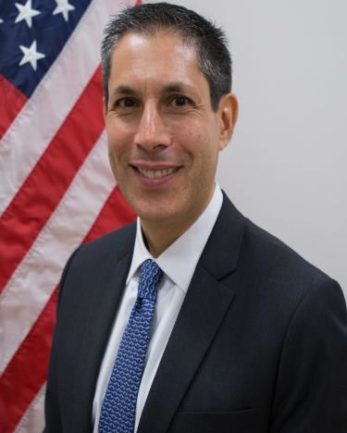 Michael Kleine is a Senior Foreign Service Officer with nearly twenty years of experience in the U.S. Department of State.

Prior to his August 2018 arrival in Melbourne, Michael served three years as Deputy Chief of Mission at the U.S. Embassy in Vientiane, Laos. He worked previously in South Korea, where he led Embassy efforts to ratify the U.S.-Korea Free Trade Agreement; Kosovo, where he supported the establishment of democratic institutions in post-war Kosovo; and Vietnam, where he was among the first to work in the U.S. Consulate General in Ho Chi Minh City. From 2013 to 2014, he served as the U.S. Trade Representative’s Senior Advisor for Japan and Korea Trade Policy.

Before joining the diplomatic corps, Michael practiced law in Washington, D.C. He earned both his undergraduate and law degrees at Duke University. He also has a master’s degree in national security strategy from the National War College in Washington.

Michael is accompanied in Melbourne by his wife, Hiroko, and two children.