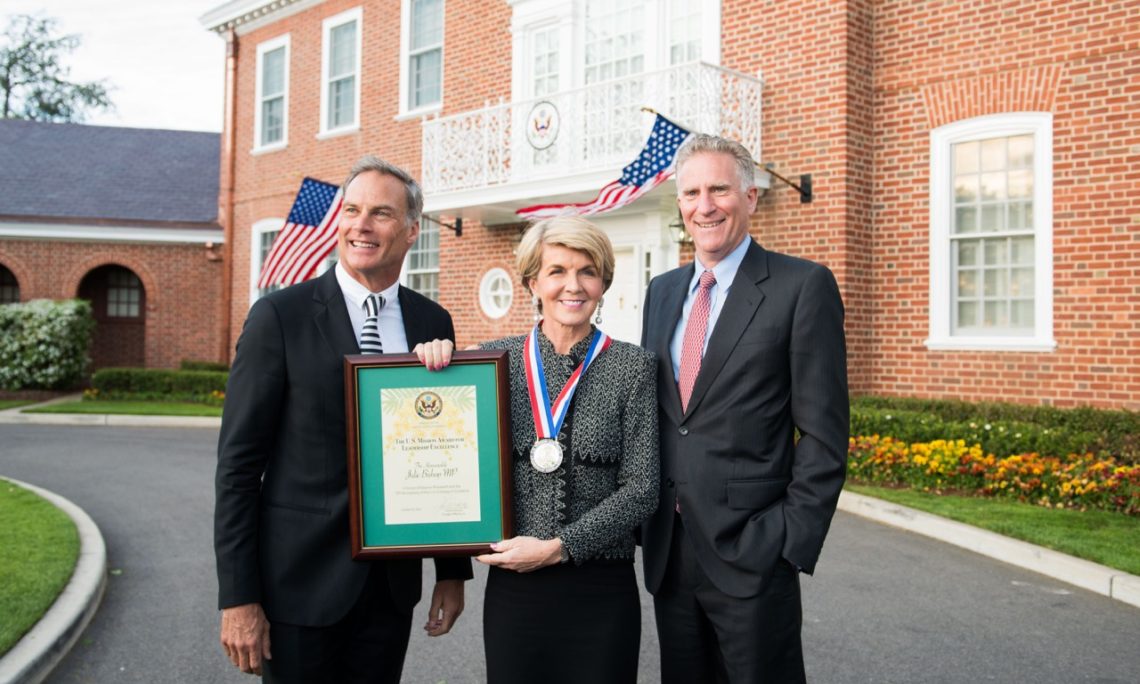 Today the U.S. Mission Australia celebrated the 75th anniversary of the Embassy in Canberra and Eleanor Roosevelt’s historic trip to Australia and the Pacific by establishing the U.S. Mission Award for Leadership Excellence – awarded to former Australian Foreign Minister and Deputy Prime Minister, Julie Bishop.

The award honors Eleanor Roosevelt’s lifelong crusade for equality, social justice, and human rights, and Ms. Bishop was presented with the award by Chargé d’Affaires ad interim James Carouso at the Ambassador’s residence that Eleanor Roosevelt first dedicated back in 1943, during the darkest days of the Second World War.

Chargé Carouso said the award was fitting recognition of Ms. Bishop’s career as a respected leader in the region, as well as her major contribution to the U.S.-Australian alliance.

Wednesday’s award ceremony coincides with the 75th anniversary of Eleanor Roosevelt’s war-time visit to Australia, and recognizes the significant contribution she made in building diplomatic links between the United States and Australia, and in the region more widely.

Against the advice of the U.S. War Department, and despite intense political pressure at home, Eleanor Roosevelt undertook a grueling, five-week tour of the South Pacific on behalf of the Red Cross in August 1943.  During her trip, she made seventeen stops, including Bora Bora, Fiji, Samoa, New Caledonia, Christmas Island, Guadalcanal, New Zealand, and Australia, speaking to an estimated 400,000 people throughout.

In September 1943, Mrs. Roosevelt reached Australia.  At this uncertain time in World War II, with the outcome very much in doubt, she formally opened the Chief of Mission’s Residence, reaffirming the strength of the Australian partnership with the United States at the highest levels of leadership.

Inspired by the legacy of this great American woman, the Embassy’s newly-established Leadership Excellence award will recognize Australian women who have demonstrated the enduring character and legacy of Eleanor Roosevelt in support of the U.S.-Australia relationship.

Chargé Carouso said the United States was committed to celebrating the contribution of women across the globe.

“We are in a time of change.  A tipping point where the voices of women are being raised around the world — and what’s more, they’re being heard,” he said.

“The U.S. and Australia together are supporting strong young women . . . who will not just follow in Eleanor’s footsteps but take up the mantle of leadership and set the course for new heights we have yet to realize..”

The Australian-American Fulbright Commission will also announce the establishment of a corresponding award for a Fulbright Scholar who embody the values of Eleanor Roosevelt and her pursuit of greater understanding, mutual respect, and equality.