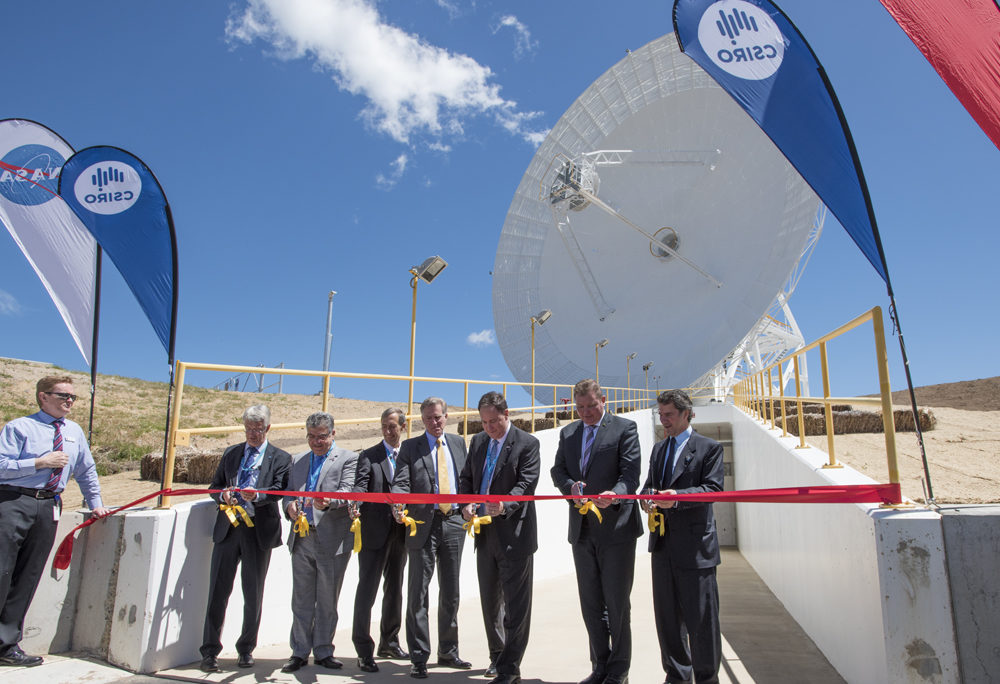 Australia and the United States have taken a major step forward in the Journey to Mars today with the launch of a new 34-meter antenna dish at the Canberra Deep Space Communication Complex (CDSCC) at Tidbinbilla.

United States’ Chargé d’Affaires to Australia, James Carouso, said the launch of the new antenna would further enhance collaboration between the United States and Australia on space exploration, and ultimately lead to a manned mission to Mars.

“The truth is that our current knowledge of the massive, mysterious cosmos is only possible because of what the United States and Australia have accomplished together,” Mr Caruso said.

“CSIRO and NASA scientists working together here at Tidbinbilla put rovers on Mars. We sent New Horizons to Pluto. We put Juno into orbit around Jupiter. And, together, we will send humankind to Mars.

“The Journey to Mars is one of the greatest human endeavors in history. These new antennae we inaugurate today will make it possible,” he said.

Australian Science Minister Greg Hunt said the cooperation between NASA and the CSIRO at Tidbinbilla pointed to a ‘bright future’ for the US-Australia relationship.

“This investment and the current space tracking operations at CDSCC highlights the close relationship that NASA has had with Australia through CSIRO and the bright future our two countries will share in space tacking for a very long time,” Minister Hunt said.

“CSIRO and NASA scientists have been working side by side since 1965 and this provides an important opportunity to collaborate, share expertise and knowledge which benefits both countries.”

Meanwhile, CSIRO Chief Executive Dr Larry Marshall said the antennae would usher in a new era of space exploration at Tidbinbilla. CSIRO manages CDSCC on behalf of NASA and the Jet Propulsion Laboratory as part of the Deep Space Network.

“CSIRO has partnered with NASA for 50 years, from capturing man’s first steps on the moon to the first images of Pluto,” Dr Marshall said.

“Our enduring global collaboration exemplifies two pillars of Strategy 2020, built on the bedrock of science excellence driving innovation to unlock the wonders of space exploration.”

Deep Space Station 36 (DSS36) is a new antenna to be built at the Canberra Deep Space Communication Complex (CDSCC) at Tidbinbilla, 35kms southwest of Canberra.

DSS36 will be a Beam Wave Guide (BWG) design meaning that the antenna has its transmission and receiving equipment located in an underground structure that forms the base pedestal on top of which the main antenna structure and dish are supported.

The pedestal design, which is already used in one of the current 34-metre antennas currently located at CDSCC (DSS34) allows for easier and safer access to the antennas electronic systems which would otherwise be inside the antenna structure.

DSS36 will also incorporate a 20 kilowatt transmitter and be capable of transmitting across S- and Ka-band radio frequencies for deep space communication to interplanetary robotic spacecraft.

Over the next 10-15 years the planets align in such a way that the Southern Hemisphere will have the best overall view of the existing spacecraft spread out across the Solar System.

DSS35 will expand the capabilities of CDSCC providing an additional antenna aperture to support these missions, plus the planned and expected growth in deep space missions being launched over the next decade. CDSCC already supports over three dozen individual robotic spacecraft.

Transmit:      Capabilities across S- to Ka-bands between 20-80 kilowatts

Receive:        Receive signals from spacecraft that are equivalent to 1/20 billionth of a watt

The total budget for construction of the two new antennas – DSS35 and DSS36, including groundworks, power, and other systems is AUD$120 million.