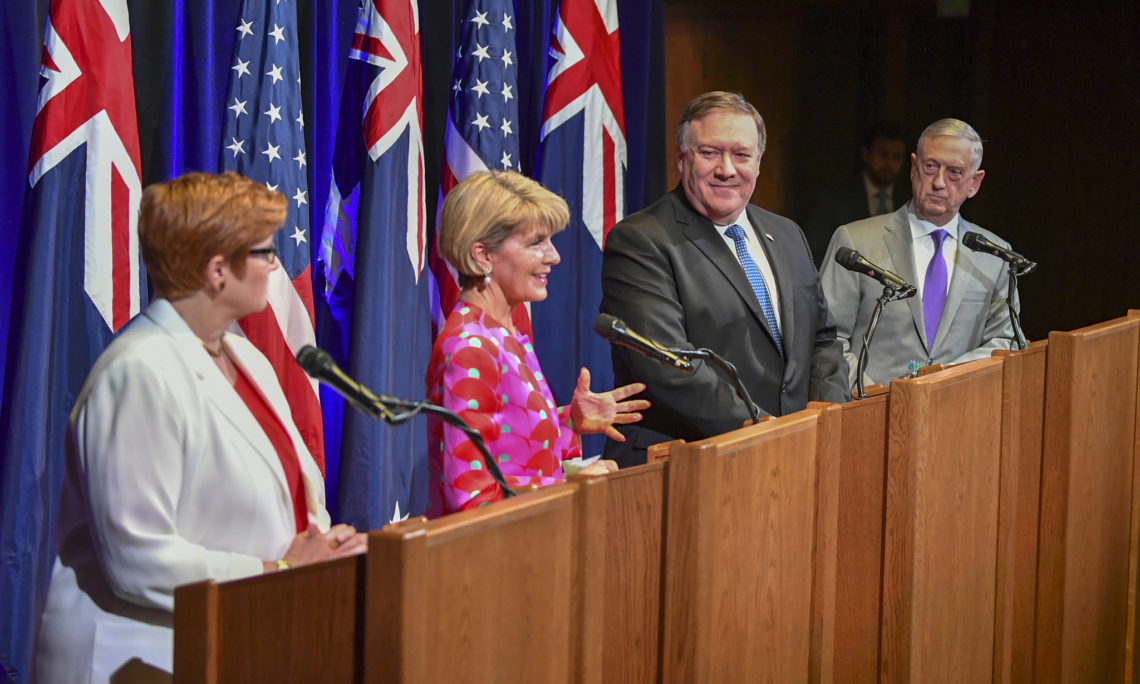 Secretary of State Michael R. Pompeo and Secretary of Defense James Mattis hosted Minister for Foreign Affairs Julie Bishop and Minister for Defence Marise Payne on July 23-24 for the annual Australia-U.S. Ministerial Consultations (AUSMIN) at Stanford University’s Hoover Institution in Palo Alto, California. Holding the meeting in the San Francisco Bay Area, on the U.S. Pacific coast and near the birthplace of the ANZUS Treaty, is a fitting affirmation of the vitality of our alliance and the significance of the Indo-Pacific to our shared future.

As President Trump and Prime Minister Turnbull declared when they met at the White House in February, the U.S.-Australia alliance is steadfast and enduring, and underpinned by a deep alignment of mutual interests and shared values. This year marks a century since U.S. and Australian forces first fought side by side at the Battle of Hamel in 1918. From the battlefields of Europe to this contested century, there are no greater friends than Australia and the United States.

The Secretaries and Ministers emphasized both nations’ strong and deepening engagement in the Indo-Pacific. They made clear their commitment to work together – and with partners – to shape an Indo-Pacific that is open, inclusive, prosperous, and rules-based. A key outcome of discussions in Palo Alto is a joint work plan that advances our shared strategic interests in the Indo-Pacific, which has diplomatic, security, and economic dimensions.

The United States and Australia highlighted the priority each places on supporting an international rules-based order, alongside allies and partners. In the Indo-Pacific, that order has underpinned decades of stability, democracy, and prosperity. The two nations reaffirmed their strong support for ASEAN centrality and the ASEAN-led regional architecture, and discussed ways to expand cooperation in connectivity, infrastructure, and energy security. They welcomed the recent U.S.-Australia-India-Japan consultations on the Indo-Pacific in Singapore and reaffirmed their commitment to strengthen trilateral dialogue with Japan. Both nations continue to place a high priority on constructive and beneficial engagement with China.

The Secretaries and Ministers highlighted the importance of U.S.-Australia defense cooperation in the Indo-Pacific, particularly through full implementation of Force Posture Initiatives between U.S. and Australian forces in Australia. They emphasized the value of Marine Rotational Force-Darwin and Enhanced Air Cooperation for improving the interoperability of U.S. and Australian defense forces. The United States and Australia highlighted their commitment to raising the number of Marines rotating to Darwin to the full complement of 2,500 as soon as practicable. They committed to strengthening bilateral security partnerships with like-minded Indo-Pacific nations through joint training and exercise opportunities. The principals also decided to integrate U.S. force elements into Australia’s annual Indo-Pacific Endeavour exercise.

Secretary Mattis and Minister Payne committed to strengthening defense collaboration in science and technology, and signed an MOU to perform critical research and development of advanced cyber capabilities. Under this MOU, Australia and the United States will be able to jointly leverage each other’s strengths and technical expertise to collaboratively develop tools and software to address cyber and other security threats.

The Secretaries and Ministers committed to increased bilateral and multilateral cooperation on economic development in the Indo-Pacific, recognizing that security and prosperity are mutually reinforcing. Our two governments will work together, and with partners, to support principles-based and sustainable infrastructure development in the region, which will promote growth and stability. The United States and Australia decided to collaborate to reduce the threat of emerging infectious diseases in the Indo-Pacific region, and to advance the Global Health Security Agenda and reinforce objectives of Australia’s Health Security Initiative for the Indo-Pacific.

They emphasized that militarization of disputed features in the South China Sea is contrary to the region’s desire for peaceful development, and reiterated the obligation to respect freedom of navigation and overflight, and other lawful uses of the sea, in accordance with international law. Both sides called for the Code of Conduct for the South China Sea to be consistent with existing international law, as reflected in UNCLOS, to support existing regional architecture, to reinforce the parties’ commitment to cease actions that complicate disputes and not to prejudice the interests of third parties or the rights of all states under international law.

The allies welcomed the face-to-face talks between the leaders of the United States and North Korea and pledged to maintain pressure and strengthen cooperation to achieve the final, fully verified denuclearization of the DPRK.

The two countries reaffirmed their determination to oppose actions that seek to undermine the international rules-based order. Noting the anniversary of the downing of Malaysian Airlines Flight MH17 on July 17, the principals condemned the downing and expressed full confidence in the findings of the Joint Investigation Team concerning Russia’s role. The principals further called on Russia to cooperate fully with efforts to establish accountability, including the process initiated by Australia and The Netherlands to establish the truth and achieve justice for the victims and their next of kin.

The Secretaries and Ministers underscored their shared commitment to ISIS’s lasting defeat in Iraq and Syria, and to support Afghanistan, including through their nations’ development assistance and NATO’s train, advise, and assist mission to the Afghan security forces. The United States and Australia reaffirmed the importance of continued cooperation on Counter-Terrorism and Countering Violent Extremism efforts in Southeast Asia.

Australia will host the next AUSMIN in 2019.