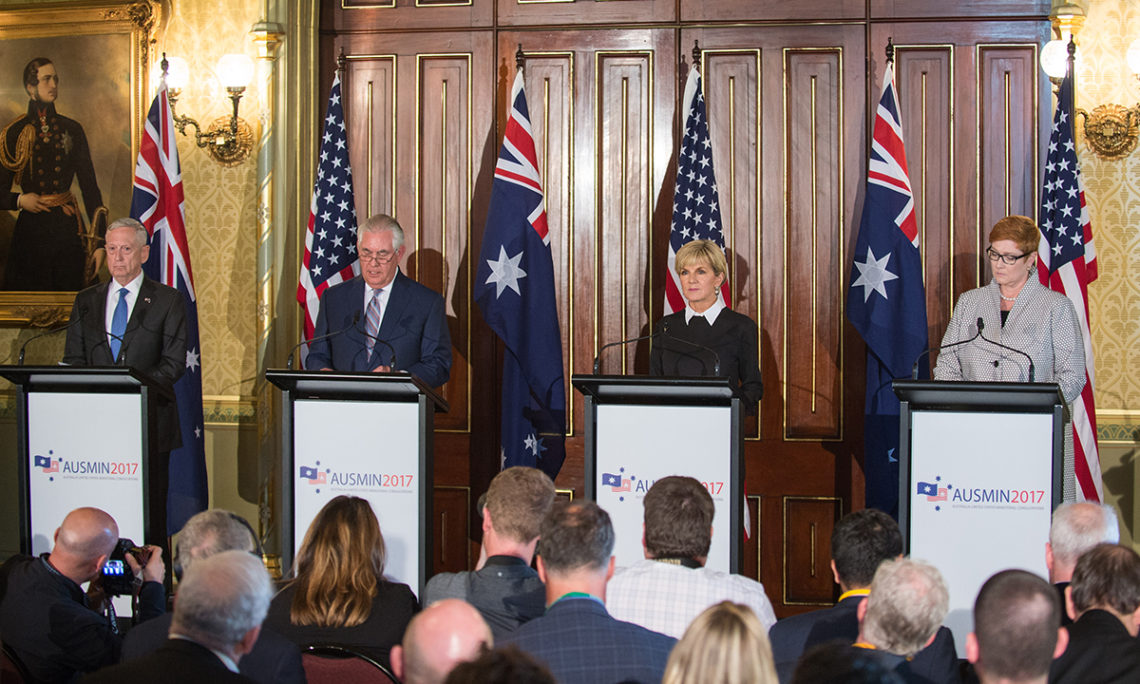 U.S. DEPARTMENT OF STATE
Office of the Spokesperson

AUSMIN 2017, the 27th AUSMIN meeting and the first under the Trump Administration, builds on the meeting between our leaders on May 4 in New York that demonstrated the continued closeness of the Australia-U.S. relationship.  The strength and vitality of our Alliance is based on a shared commitment to freedom and democracy and has enduring importance in our respective national security, foreign and strategic policies.

Bilateral defence, security, and intelligence cooperation under the Alliance is as important today as it was when the ANZUS Treaty was signed in 1951.  2017 marks the 75th anniversary of the Battle of the Coral Sea and the 50th anniversary of the Joint Defence Facility Pine Gap, with the 100th anniversary in 2018 of Australian and U.S. forces first fighting together at the World War I Battle of Hamel.  Today, both countries are working side by side in Iraq and Syria as part of the global coalition against ISIS, and continue to make military contributions to Afghanistan’s security.

Australia and the United States reaffirmed their commitment to the Alliance at AUSMIN 2017, and decided to further expand defence and security cooperation, including: a commitment to further strengthen the interoperability of our armed forces; and continued close collaboration on capability development and defence technology.  We confirmed our commitment to full implementation of the U.S.-Australia Force Posture Initiatives.

Australia and the United States underlined their shared, deepening commitment to the security, stability and prosperity of the Indo-Pacific region, and to strong regional organisations, especially the East Asia Summit, APEC, and the ASEAN Defence Ministers Meeting-Plus.  They urged all parties to refrain from further militarisation of disputed features, including in the South China Sea (SCS).  They emphasised the importance of upholding lawful freedom of navigation and overflight and adhering to the rules-based order.  They considered the 2016 award by the Arbitral Tribunal under the UN Convention on the Law of the Sea as a useful basis for further efforts to peacefully resolve disputes in the SCS.  They decided to increase bilateral collaboration in relation to the Indo-Pacific, with a number of activities to be taken forward ahead of AUSMIN 2018.

Both countries condemned North Korea’s ongoing development of nuclear and missile programs and expressed their deep concern at the unacceptable threat this posed to the region and the world.  They committed to working closely together and with regional partners to implement sanctions and impose costs on the regime for its destabilising behaviour and dangerous and unlawful pursuit of nuclear weapons.

Both countries discussed the importance of working with regional partners to address regional security challenges, including terrorism and the threat of returning foreign fighters, cyber threats, and maritime security, and to support regional stability and prosperity.  Australia and the United States pledged to continue to strengthen their trilateral cooperation with Japan, and to enhance their engagement with our regional allies and partners.  In the wake of recent terrorist attacks in the UK, the Philippines, Indonesia, and elsewhere, the United States and Australia discussed ways to work together to counter terrorism, in the region and globally.

Australia and the United States discussed our shared interest in the strength, growth and economic future of our Pacific neighbourhood.  Both countries resolved to deepen bilateral dialogue on the Pacific and to strengthen cooperation with Pacific Island countries, including in the areas of maritime security, combatting trans-national threats to a secure Pacific, and APEC 2018 in Papua New Guinea.

The United States will host the next AUSMIN meeting in 2018.