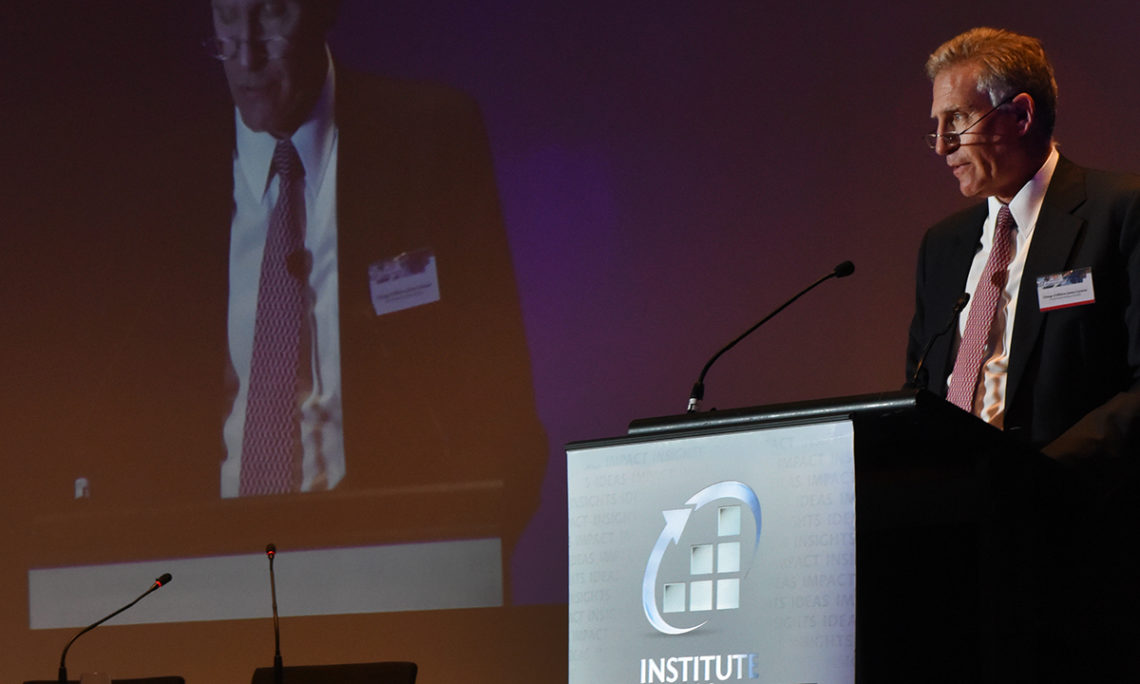 National Gallery of Australia, Canberra
(As prepared for delivery – September 14, 2017)

Ladies and gentlemen, it’s an honor to join you again at this esteemed forum.  Thank you very much for having me back this year.

I was privileged to be in the audience last month for an address by former Prime Minister Paul Keating.  I have long been an admirer of Mr. Keating for his vision and courage while in office, and, of course, his famed rhetorical flair.  He didn’t fail to deliver on this occasion.  He spoke with eloquence: on his defense of the Alliance during the Cold War;  and on his predictions for both America’s decline on the global stage and the inevitable rise of China—as he argued are ordained by history.

It was fascinating.  It was articulate.  It was wrong.

His primary error is in assuming an inevitability to the rise and fall of nations.  At the end of the 19th century, Argentina was expected to be a superpower.  In 1979, there were very few who expected the Soviet Union to fall in 1989.  And by 1989 there were even fewer who anticipated where China would be today.  As the great American philosopher Yogi Berra taught us: “It’s tough to make predictions.  Especially about the future.”

Presumably because of this inevitability thesis, there’s an insistent murmuring in certain sectors of this country that Australia must make a choice:  America?  Or China?

I frankly find this a bewildering notion—not least because neither China, nor the US, are actually asking this question of Australia.

Now, a nation’s foreign policy is derived from its interests and principles. With every country there is a Venn diagram of where these overlap. The goal is to maximize the benefit derived from the overlap and minimize the friction in areas that don’t overlap.  Regardless of who sits in the White House, US foreign policy always has these three underlying touchstones:

I believe Australian foreign policy has a very similar basis.

And to these ends, the US–Australian Alliance has been mutually beneficial.  When we have worked together, it’s because Australia determined it was in Australia’s interest for us to work together.  This is not some perverse fingertrap—broken only by severing the bonds of allegiance.   Nor is it fueled by misty nostalgia without regard to current realities.  This has always been a working and effective partnership—one in which we sometimes speak bluntly to each other; but then go and grab a beer together afterwards.  This is “independent Australian foreign policy” at work.

Peter Varghese recently commented on what he called the “phony debate” on whether there is an independent Australian foreign policy.  He said those people: “. . . should pay more attention to the historical drivers of Australia’s Asia policy.  If they did, they would recognize a fairly consistent pattern of seeing Asia through the prism of Australian national interests.  And where Australian policy coincided with first British and then American policy in the post war period it was not imitation or dependence, but shared interests that shaped the coincidence.”

Well, you may say, that was in the past. Now, the U.S. is withdrawing from global leadership.   But just where is this withdrawal?  Not in the MidEast, where we continue to support the pushback against ISIS and the development of Iraq.  Certainly not in Afghanistan—the President has just released his Strategy for Afghanistan and South Asia.  And not in Asia where, you may have heard, we are committed to working with our allies in resolving the many grave threats posed by North Korea.

We don’t need to look beyond our own region to see the new administration, at the highest levels, pursuing bi-lateral, tri-lateral and multi-lateral partnerships to solve the world’s most pressing issues—old and new.

In the first nine months of the Trump administration, our countries have had leaders’ meetings; attended high-level strategic dialogues; enjoyed Vice-Presidential visits; and had the President’s commitment to attend regional meetings later this year.

However—and this is the crux of the matter—we are engaging on our own terms.  I draw upon President Trump’s remarks to Prime Minister Abe earlier this year in seeking a “trading relationship that is free, fair and reciprocal, benefitting both of our countries.”

This is no different to how Australia or China or any previous U.S. President has operated on the world stage.   We all want the best outcomes for our own people—you can’t assume otherwise.

And peace, prosperity, and security in the Indo-Asia–Pacific—indeed, the world—is in the best interests of the United States.  Secretary Mattis affirmed last month that “each nation gains security in concert with other nations.”  And as Vice President Pence has repeatedly said, “America first” does not mean America only.  Let’s not forget, even before the Obama administration announced its Asia Pivot in 2011, we were still a United States deeply involved in Asia.

Our goal remains to reduce barriers to, and raise standards for trade and investment, regionally and globally, while upholding the rules-based order to ensure the continued safety and prosperity of our people.  The difference is that our modus operandi is now written in bold.   And underlined a few times.  And then tweeted for good measure.

That’s democracy for you.   But you are all well-versed in how to peer beyond the rhetoric, to see through the daily media fodder and focus on tangible actions and outcomes.

So let’s focus on those outcomes for Australia.

But the U.S. is a pretty handy partner too.  And what’s more—we offer reliability, market access, capital, technology, work opportunities, and joint ventures that are not government mandated.  Your companies trust our courts as avenues for unbiased dispute resolution.  And that’s why the US is, by far, the largest destination for Australian outbound investment.

We can each pursue our economic interests knowing we’re working in an environment of predictable standards and practices.  That’s why Australian companies operating in the U.S. made more than $60 billion in sales last year.  That’s why American firms have created 335,000 highly-paid jobs in Australia.  And that’s why we are Australia’s most significant economic partner.  That’s the economic value of shared interests and principles.

We have a history of investment in this country that has weathered wars; withstood economic crises; and witnessed world leaders come and go.  The veins of this partnership run deep—not just at the government level, but between individuals, companies and institutions.  They run deep because our nations—and our people—operate on the common principles of individual liberties, equal rights and, to steal that wonderful Aussie phrase, the principle of “a fair go”.

One commentator, in debating the so-called US/China choice last month, argued that China is Australia’s most important economic partner because “we could replace one but not the other”.  Now, who would ever posit that greater reliance on a single customer is a good idea?  This perspective discounts the sheer impact of U.S. investment in Australia—which is worth more than the 2nd and 3rd largest investors combined.  And it completely ignores the consequences for Australia’s next largest export markets—Japan and Korea; not to mention the huge potential of India.  But in the end, we need only to look at the official tightening of Chinese foreign investment to conclude: it may not be entirely up to you.

China, of course, is and will continue to be a critical counterpart in the region and the world.  As they should be.  Our bilateral relationship is deep and we cooperate across a broad range of global issues including non-proliferation, counter-terrorism and climate change.  And Chinese investors continue to flock to the U.S. market for those very same benefits as Australians.  Anybody who thinks the United States is a replaceable economic power clearly has not told the Chinese.

Because beyond the alarmist headlines, China and the United States enjoy and work to strengthen a very productive relationship even as we have strong disagreements on certain matters.  The Chinese economic miracle could not have happened without the rules-based order the U.S., Australia and Japan have long supported.  But to reiterate a recent sentiment expressed by Secretary Tillerson: With economic power comes security responsibilities.  China has a huge stake in maintaining the system that got them to where they are today.

I hark back to an earlier Australian Prime Minister, Gough Whitlam. In July 1973, he told the National Press Club in Washington:  “. . . in our efforts to redress the imbalance of a generation of unthinking hostility towards China, we do not propose to introduce a new imbalance by discarding or downgrading older relationships.”

Earlier this year, Dennis Richardson noted that Australia has two friends; one Alliance. Two strong economic partnerships; one firm, historic friendship.  There is no either/or.  The trite phrase “more Asia, less America” might as well be “more walking, less gum-chewing.” I think you can do both.

Australia continues to reap the rewards of significant economic and irreplaceable strategic relationships across the Pacific. You have achieved security and a record run of economic growth by following your interests and principles.  So it really begs the question: if you’re sitting on a Royal Flush—why so eager to discard the Ace?