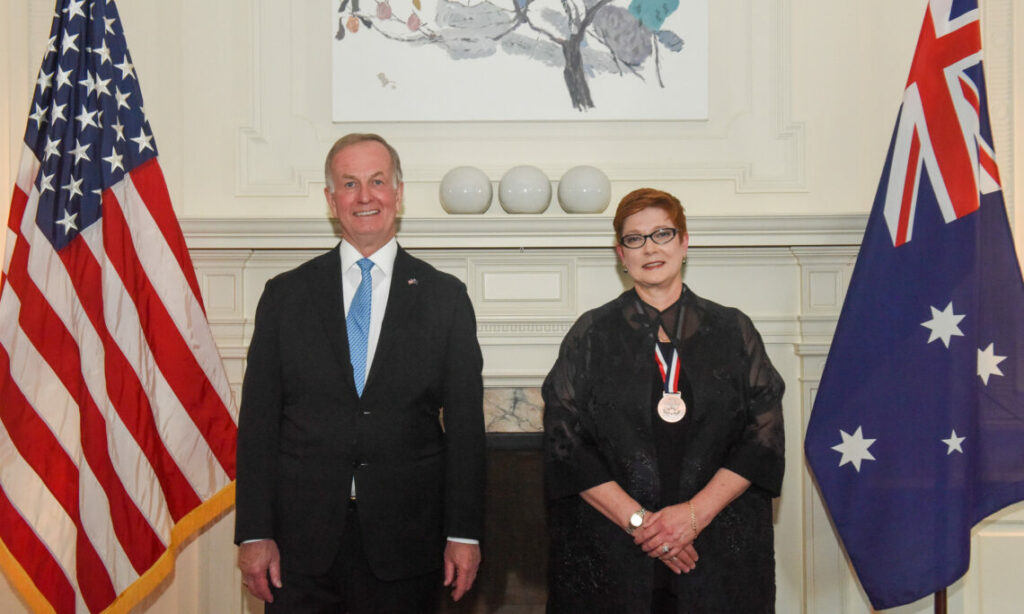 The United States Ambassador to Australia Arthur B. Culvahouse Jr. presented Australian Foreign Minister Marise Payne with the U.S. Mission Australia Award for Leadership Excellence in a ceremony at the historic U.S. Ambassador’s residence in Canberra on November 10.

The U.S. Mission Australia Award for Leadership Excellence celebrates the achievements of Australian women leaders who have significantly advanced the U.S.-Australia Alliance.

At a ceremony at the United States Embassy in Canberra, Ambassador Culvahouse noted Minister Payne has been integral to Australia’s confident leadership in the world and the award recognizes her exceptional contributions to the U.S.-Australian alliance as Minister for Foreign Affairs, Minister for Women, and former Minister of Defense.

In his remarks, the Ambassador said, “As Minister for Foreign Affairs and Minister for Women, Minister Payne has championed the rules-based order, democracy, and the fundamental role women play in securing peace and prosperity…As we look to the future, we need allies like Australia, who stand up for our shared interests and our foundational values.

Australia’s Minister for Foreign Affairs and Minister for Women, Senator the Hon Marise Payne, said it was an honor to receive the award in recognition of former First Lady Eleanor Roosevelt.

“This is a time of uncertainty around the world, and particularly in the Indo-Pacific region. We are seeing rapid strategic change, marked by challenges to the rules-based order that the United States – with Australia’s strongest support – has played such a vital role in sustaining over the past seven decades.

This is the type of challenge for which our Alliance is suited – because it is based on enduring, shared values that transcend parties or individuals in the White House or the Lodge.”

The award was established in 2018 in honor of the 75th Anniversary of Eleanor Roosevelt’s visit to Australia during the darkest days of the Second World War. Produced by the Royal Australian Mint, the medal accompanying the award carries the words “The Next 75 Years,” aiming to inspire the next generation of women leaders in both the United States and Australia.