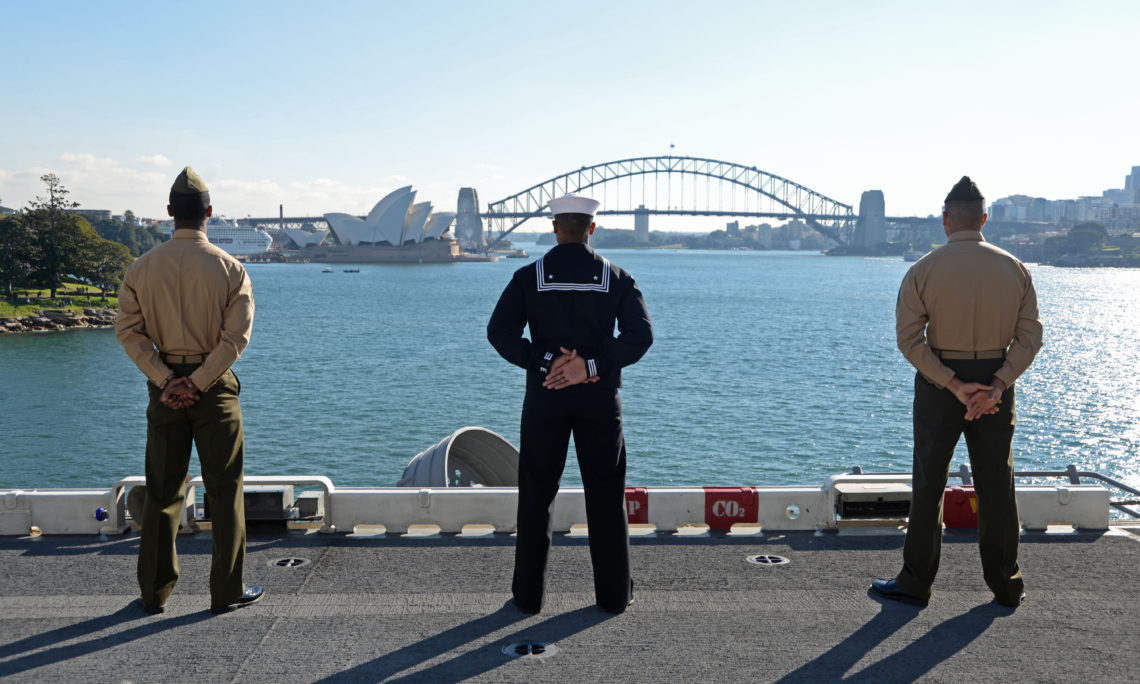 170629-N-YG014-021 SYDNEY (June 29, 2017) Sailors and Marines man the rails as the amphibious assault ship USS Bonhomme Richard (LHD 6) pulls into the Sydney Harbor as part of a port visit. Bonhomme Richard is in Sydney to advance U.S. – Australian relations ahead of the bilateral training exercise

More than 33,000 U.S. and Australian personnel will participate in the biennial military training exercise Talisman Saber 2017 in Australia, June 23 to July 25, 2017.

Featuring 21 ships, to include the U.S. Navy aircraft carrier USS Ronald Reagan (CVN 76), the Bonhomme Richard Expeditionary Strike Group, and more than 200 joint aircraft, this seventh iteration of the exercise will focus on training a Combined Task Force of U.S. and Australian forces in a mid-intensity, high-end warfighting scenario, incorporating interagency participation, along with a command post exercise involving a transition between a 3 and 4-star Headquarters. U.S. Pacific Command units and Australian forces will conduct live and virtual training exercises in multi domains on sea, land, air, cyber and throughout multiple training areas in and around Australia.

Talisman Saber provides an invaluable opportunity to conduct operations in a combined, joint and interagency environment that will increase both countries’ ability to plan and execute contingency responses, from combat missions to humanitarian assistance efforts.

Talisman Saber is a realistic and challenging exercise that brings service members closer and improves both nations’ ability to work bilaterally and multilaterally, and prepares them to be poised to provide security regionally and globally. This exercise is a major undertaking and illustrates the closeness of the Australian and U.S. alliance and the strength of the military-to-military relationship.

The exercise will be conducted from multiple locations in the U.S. to include Joint Base Pearl Harbor-Hickam, Naval Base San Diego, Joint Base Lewis McChord, Naval Station Norfolk Suffolk Joint DoD Complex, Camp Atterbury, Indiana and on the island of Guam; and multiple locations in Australia to include Darwin, Rockhampton, Amberley, Canberra, Enoggera, Fog Bay, the maritime areas of the Coral Sea; and Australian ranges to include the Bradshaw, Shoalwater and Townsville Field Training Areas.

Along with the opportunity to hone military skills, significant involvement from international, Australian and United States government agencies make this a truly collaborative whole-of­ government effort. Active participation by international organizations includes the World Food Programme (WFP), the United Nations Office for the Coordination of Humanitarian Assistance (UNOCHA) and the International Committee of the Red Cross (ICRC).

The U.S. and Australia train and work together in a variety of exercises and missions throughout the year, including working together on humanitarian and civic assistance missions in the Indo-Asia-Pacific region.