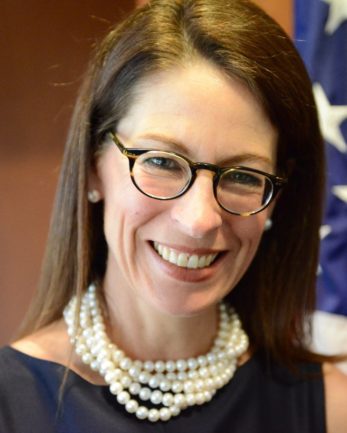 Sharon Hudson-Dean is a career American diplomat currently serving as U.S. Consul General in Sydney, Australia.  Ms. Hudson-Dean was the Acting Deputy Assistant Secretary for Public Diplomacy and Nordic/Baltic Affairs in the European and Eurasian Affairs Bureau at the Department of State from 2017-18.  Prior to that, she served as Chargé d’Affaires, a.i. and Deputy Chief of Mission at the U.S. Embassy in Riga, Latvia for three years.  Ms. Hudson-Dean has also represented the United States in Georgia, Russia, Zimbabwe, South Africa, Nepal, and Australia.

In Washington, she has previously worked in the Bureau of South Asian Affairs and as an American Political Science Association Fellow in the U.S. Senate.  From 2010 to 2013, Ms. Hudson-Dean served as Counselor for Public Affairs at the U.S. Embassy in Harare, and, from 2007-2010, she was the Press Attaché for the U.S. Mission to South Africa.

Ms. Hudson-Dean has a Bachelor of Science (Foreign Service) from Georgetown University and a Master of Arts degree in Political Communications from Johns Hopkins University.  She is the recipient of several State Department Superior and Meritorious Honor awards, as well as the Public Diplomacy Alumni Association Achievement Award, and speaks Latvian, Russian, and some Georgian and French. She is married with three children and enjoys travel, bicycling, and cultural events.