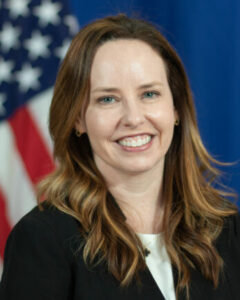 Siriana Kvalvik Nair is a career Foreign Service Officer with the U.S. Department of State.  Prior to her assignment as the United States Consul General in Perth, Australia, she served as the Deputy Political Counselor at the U.S. Mission in Brasilia, Brazil, advancing bilateral geopolitical objectives during a period of transformation in Brazil’s foreign policy.  In 2021, she was nominated for the State Department Director General’s Award for Impact and Originality in Reporting.  Prior to Brazil, Ms. Nair served as Acting Political Counselor at the U.S. Mission in Jakarta, Indonesia, overseeing U.S. engagement in a broad range of areas, including democracy and human rights, military and security cooperation, and the South China Sea.

As the Director of the United States’ International Narcotics and Law Enforcement regional office for North Africa in Rabat, Morocco, Ms. Nair established and managed multi-million dollar programs in law enforcement, prison reform, and border security, which continue to deliver benefits to the U.S.-Morocco partnership.  Her other assignments with the Department of State include New Delhi, India; Manila, Philippines; and Washington, D.C., where she worked in the Bureau of South and Central Asian Affairs and in the State Department’s Human Resources Bureau.  Ms. Nair has a Master’s degree in Law and Diplomacy from the Fletcher School of Law and Diplomacy at Tufts University, and degrees in Political Science and Biology from Wellesley College.  She is married to Jai Nair, a fellow Foreign Service Officer, and they have four children.