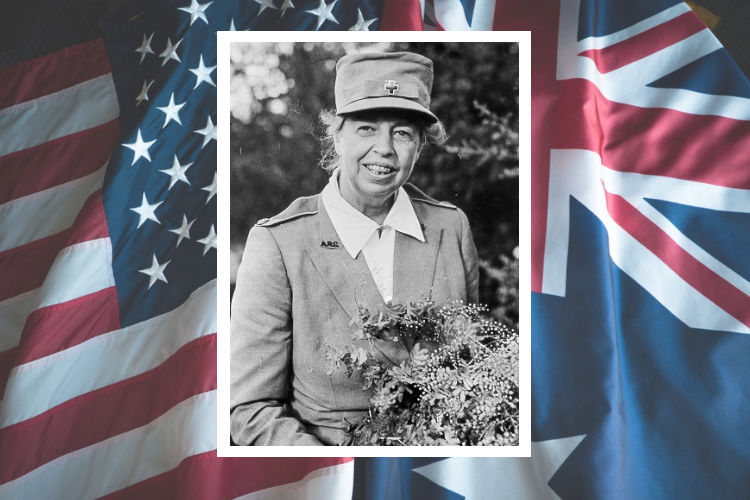 We are here tonight because of one woman’s innate sense of what was right, just, and necessary, as well as her journey towards a more equal world.

It was only in January 1940, the United States established official diplomatic relations with Australia, which had previously been conducted through the Government of the United Kingdom.  The actual lease on this compound was signed on the 8th of December 1941, at the same time Pearl Harbor was attacked.  Two months later, in February 1942, Darwin’s two airfields, along with ships in the harbor, were attacked by 242 Japanese aircraft. This was the first and largest single attack mounted by a foreign power on Australia. In this same year, the Battle of the Coral Sea took place in May, the Battle of Midway in June as well as the start of the arduous Guadalcanal campaign in August.

Against the advice of the U.S. War Department, and despite intense political pressure at home, Eleanor Roosevelt undertook a grueling, five-week tour of the South Pacific on behalf of the Red Cross in August 1943.  During her trip, she made seventeen stops, including Bora Bora, Fiji, Samoa, New Caledonia, Christmas Island, Guadalcanal, New Zealand, and Australia, speaking to an estimated 400,000 people throughout.  Admiral William F. “Bull” Halsey, U.S. commander in the south pacific, opposed her visit.  He had a war to fight, he said, and no time to waste welcoming a visiting “do-gooder.”  But when the first lady showed up and went to work, taking on a demanding schedule, he quickly changed his mind.

In September 1943, Mrs. Roosevelt reached Australia.  At this uncertain time in World War II, with the outcome very much in doubt, she formally opened the Residence in which we are all gathered, reaffirming the strength of the Australian partnership with the United States at the highest levels of leadership.  Famously, while here, Mrs. Roosevelt planted a Pin Oak which will be discussed in further detail later in the ceremony.

Mrs. Roosevelt’s visit reinforced to Australians that the United States would stand by them in the darkest hours of conflict.  Not only did she make a point of visiting wounded soldiers wherever she went, she was particularly determined to highlight the work women were doing in Australia to help win the war.  When in Sydney, she declared, “Perhaps here is the germ of an idea that in the postwar period women will be encouraged to participate in all activities of citizenship.”  Australians and Americans, men and women alike, hailed her as a beacon of hope.

When she returned to New Caledonia on her way home, Admiral Halsey agreed to let her visit Guadalcanal, one of her strongest desires for her trip, and he expressed his new-found admiration for her efforts.  “I told her that it was impossible for me to express my appreciation of what she had done, and was doing, for my men.  I was ashamed of my original surliness.  She alone had accomplished more good than any other person … who had passed through my area.”

Her trip to Guadalcanal was rough, flying without lights at night in unheated military transport to prevent detection by the Japanese who were regularly bombing the island.  She had been traveling non-stop for a month by this time.  She was exhausted and had lost thirty pounds. Speaking with soldiers and visiting hospitals and cemeteries left its mark on the rest of her life.  Her time in Guadalcanal, in Australia, and throughout the South Pacific made her more determined than ever to secure a durable peace rooted in respect and equality for all after the war.  She commented, “If the generation that fights today is to lay the foundations on which a peaceful world can be built, all of us who have seen the war at close range must remember what we see and carry a crusading spirit into all of our work.”

Eleanor Roosevelt would continue her crusade, fighting for equality, social justice, and human rights, for the rest of her life.  Australia, the United States, our partnership, and our world are all better off as a result.  It is Mrs. Roosevelt’s indomitable spirit, her strength of leadership, and her unending quest to do what is right that tonight we celebrate in honor of the 75th Anniversary of her trip.  It is up to us to carry that spirit into the future.  Thank you.