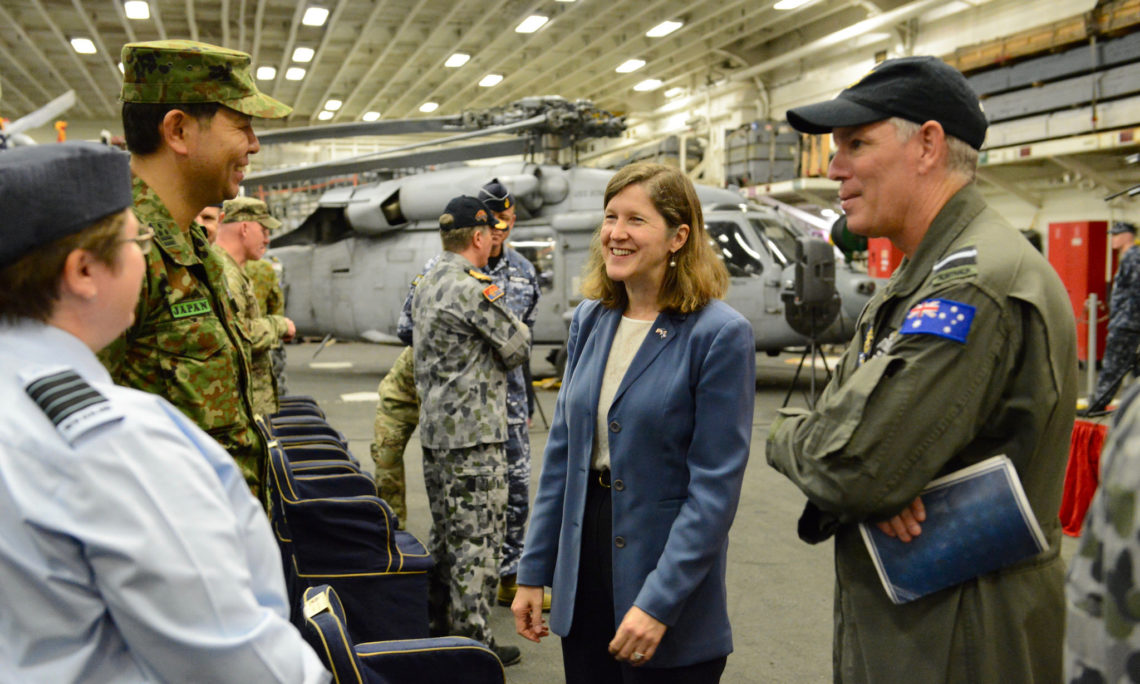 Today we gather for the closing ceremony for Talisman Saber 2017.  It is fitting to hold this ceremony aboard USS Ronald Reagan, with all 98,000 tons of diplomacy and power projection.

I was asked to speak about the Alliance between the United States and Australia, now in its 100th year.  In 1918, on our Independence Day of July 4th, U.S. troops marched into battle on the Western Front for the first time under a foreign commander, Australian Lieutenant General John Monash, in the Battle of Hamel.  But it is also important to note that the Australian and American planners for this battle worked together to develop a combined arms approach using tanks, aircraft, artillery, and machine guns … new tactics and technologies that were used successfully by the Allies in the larger battles ahead.  Since that day, our two nations have fought side by side in every major war.

Talisman Saber was conducted on the beaches and off the beautiful coast of Queensland.  It is on these same waters of the Coral Sea where our countries, together, changed the course of war in the Pacific 75 years ago.

In March of 1942, Australian Prime Minister John Curtin delivered a radio broadcast from Canberra aimed at the men and women of the United States.  Describing “the struggle to save mankind” our countries shared in those dark days, the Prime Minister said: “On the great waters of the Pacific Ocean war now breathes its bloody steam. From the skies of the Pacific pours down a deathly hail.  In the countless islands of the Pacific the tide of war flows madly. For you in America; for us in Australia, it is flowing badly.”

With the Japanese advancing south and west through the Pacific, the Prime Minister issued a stirring cry for defending the free institutions both our countries enjoy.  He asserted, “We fight so that, in the words of Lincoln, ‘government of the people, for the people, by the people, shall not perish from the earth’.”

As we all know, America answered Australia’s call, and together we thwarted the Japanese advance and turned the tide of war.  The Battle of the Coral Sea in the first week of May 1942 enabled the decisive victory at Midway a month later.  656 Americans and Australians lost their lives in the Battle of the Coral Sea, with the aircraft carrier USS Lexington among the ships that were sunk.

One of the USS Lexington survivors was yeoman Julius “Harry” Frey, who expressed his desire to be buried with his shipmates in the hallowed waters of USS Lexington’s final resting place.  Ten days ago, on July 15th, the crew of USS Ronald Reagan paused from the exercise to spread the ashes of Harry Frey and his wife into the Coral Sea where the “Lady Lex” sank.  To Commanding Officer Captain Buzz Donnelly and the crew, thank you for fulfilling Harry’s final request.

We hold this ceremony today in Brisbane, a city with an important role in our bilateral relations.  75 years ago — this week — U.S. General Douglas MacArthur moved the Headquarters of the Allied Forces in the South-West Pacific to Brisbane, to a building that housed an insurance company.  Above the door — then and today — is the company inscription, “A sure friend in uncertain times.”  This phrase aptly describes our unparalleled bilateral relationship and alliance over the past century.

From his headquarters in Brisbane, General MacArthur planned the campaign in the SW Pacific — and for most of 1942 and 1943, he commanded more Australian than U.S. personnel.  With the steady influx of U.S. and Australian troops into Brisbane, Townsville, Rockhampton, Cairns, and other cities along the coast, came medical facilities, supply depots, trains, airfields, training establishments, and scientific research sites.  Many of these facilities remain today, a reminder of our tremendous combined effort.

USS Ronald Reagan is the largest ship in the U.S. Seventh Fleet, which was formed here in Brisbane in March 1943.  “Side by side” is as true for seamen as for soldiers:  most of the ships of the Royal Australian Navy were part of the Seventh Fleet from 1943 to 1945 as part of Task Force 74.

Our Alliance is as strong and essential today.  Several years ago, Marine Corps General James Mattis, now U.S. Secretary of Defense, assessed the impact of Australia’s Special Forces in Afghanistan, “We Marines would happily storm hell itself … with your troops on our right flank.”

While we hope fighting side by side never reaches the gates of hell, General Mattis’ sentiment sums up the extraordinary nature of our Alliance.  As we reflect on a century of shared struggle and sacrifices side by side, we can look forward to the certainty that in the uncertain times ahead, the United States has no better friend, and no better ally, than Australia.

Congratulations to all the participants in Talisman Saber 2017.  The planners and operators working side by side designed an exercise that validated and enhanced the interoperability that enables us to work together in peace, humanitarian response, and war.  The combined arms tested over the past weeks include technologies beyond the wildest imaginations of General Monash and his compatriots, but the foundation of the U.S.-Australian Alliance remains the same as in his day:  we are side by side.