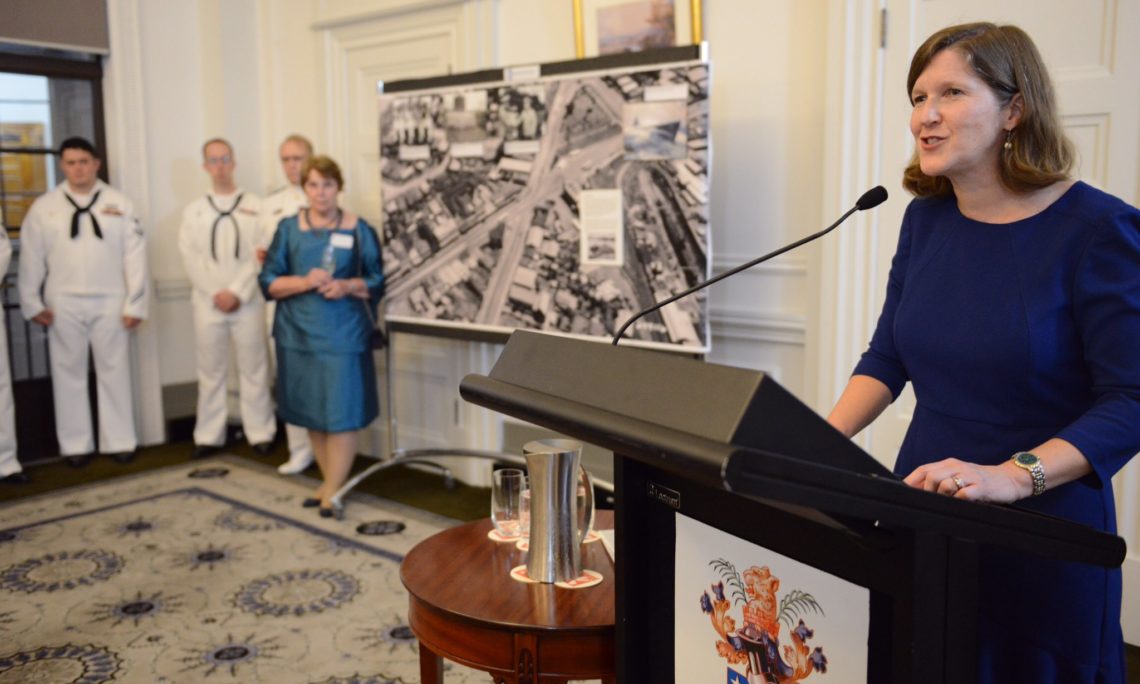 One of the greatest honors for me, as the U.S. Consul General, is to represent the American people and our government at historic events such as this. It is also a real honor to share the stage today with the Lord Mayor, Rear Admiral Mead, and Commander of the U.S. 7th Fleet, Vice Admiral Phillip Sawyer.

This is a significant and special event and I’m thrilled to be a part of the celebration with our best ally and partner in the world, Australia.

I want to start by thanking the Lord Mayor’s office, and our other friends here in Brisbane who made this celebration possible: John Dwyer, Barry Theis, the team at the MacArthur Museum, Alicia Doherty and AmCham Queensland.

I would be remiss if I didn’t also acknowledge my personal connection with the U.S. Navy: my husband, Captain Chip Fowler, who joins us here this evening. Chip deployed four times with the 7th Fleet during his career, to include as a squadron commanding officer and task group commander.

President Theodore Roosevelt, when speaking to Congress in 1902 said, “A good Navy is not a provocation to war. It is the surest guarantee of peace.”

Those words were true then … and they remain true today.

Over the past seventy five years, the Seventh Fleet – born right here in Brisbane – has been standing watch, guarding the rules-based order in the Indo-Pacific region, where independent nations with diverse cultures and different aspirations can prosper side-by-side in freedom and peace.

So we gather to celebrate the proud history of the Seventh Fleet, from combat operations in Leyte Gulf, the Inchon landings, service on Yankee Station during the Vietnam War, to Desert Storm … and let us not forget the massive humanitarian relief operations in northern Japan after the devastating 2011 earthquake and tsunami. And we gather to celebrate the Seventh Fleet’s important mission, and its future.

The United States has advanced freedom, trade, peace, and prosperity across the Indo-Pacific. The very presence of this Fleet and allied warships help protect the vital sea lanes that underpin global commerce and economic prosperity. We, all of us, count on VADM Sawyer and the women and men of the Seventh Fleet to be that presence.

Our vision for the Indo-Pacific excludes no one. We seek to partner with all nations that respect national sovereignty, fair and reciprocal trade, and the rule of law. Our hope is for all nations to live in prosperity, security, and freedom. For the Indo-Pacific region to continue to flourish, each nation in the region must be free to determine its own course within a system of values that ensure opportunity for even the smallest countries to thrive, free from the predations of the powerful.

The United States, and the U.S. Seventh Fleet, has no closer partner in this work than Australia. We saw it during the greatest Naval Battle ever fought in the Leyte Gulf, when ships of the Royal Australian Navy sortied into “harm’s way” under Commodore Collins as an integral part of the 7th Fleet, delivered Gen. MacArthur and his army to the Philippines, and dealt the Imperial Japanese Navy a devastating defeat from which it never recovered.

And we saw it last year when a record 33,000 Americans and Australians participated in the biennial joint training exercise Talisman Saber not far from these shores in the Coral Sea. We see it every day as Australian and American entrepreneurs collaborate to build and strengthen our economies. And we see it here, in Brisbane, where a city and a community come together to celebrate our shared heritage – a friendship that has been forged during times of conflict and deepened through decades of peace, prosperity, and shared values.

When I was studying at the U.S. National War College I was introduced to the Sailor’s Creed, which, in part, reads “I represent the fighting spirit of the Navy and those who have gone before me to defend freedom and democracy around the world.” Today, we celebrate that creed and – we celebrate the Seventh Fleet – the surest guarantee of peace.