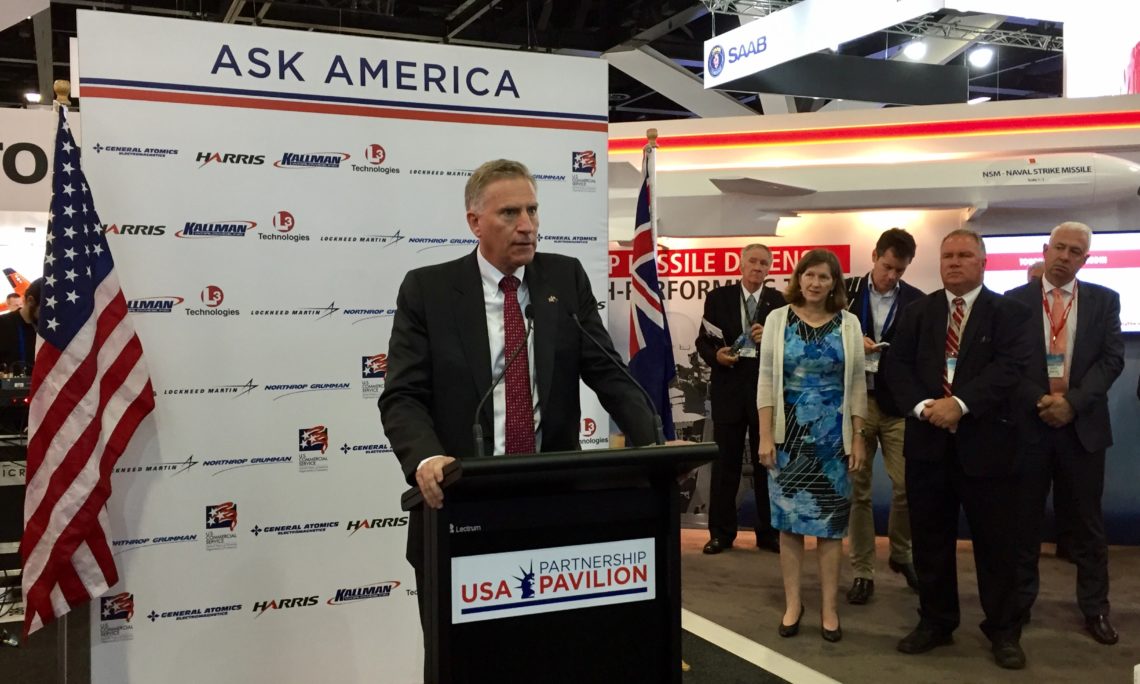 Thank you, Tom, and thanks to the whole team at Kallman Worldwide for organizing the U.S. presence here at Pacific 2017. The new USA Partnership Pavilion is an impressive showcase for America’s innovative maritime defense and commercial partners, equipment products and services. Welcome all!

2017 marks a number of significant maritime milestones in the U.S.–Australian strategic relationship—perhaps most notably, the 75th anniversary of the Battle of the Coral Sea, which saw U.S. and Australian sailors and airmen fighting together to turn back the advance of Japanese forces in May 1942. It also marks the 75th anniversary of the bombing of Darwin—the first attack on the Australian mainland by a foreign enemy. And last month, we had a milestone for the Naval Communication Station Harold E. Holt in Exmouth, which has now provided valuable support for U.S., Australian and allied submarines for 50 years.

The highest levels of the U.S. government recognize the benefits of this partnership. In recent months we have heard Secretary of Defense Mattis express his “enormous respect” for Australia’s military and Secretary of State Tillerson affirm Australia’s important role in the region. And just as it has proven effective over the past seven plus decades, we continue to see the importance of the Alliance in action today.

Late last year, one of our ships took fire off the coast of Yemen, but this vessel—the USS Mason—was able to successfully deploy its Nulka missile defense in response. Why is this noteworthy? Well the Nulka is an Australian-developed system, and it’s now installed on more than 100 American ships.   It not only represents a $1 billion export program for Australia, but it’s a system that is keeping thousands of Australian, American and Canadian sailors safe around the world.

Whether it’s the U.S.–Australian Collaborative Submarine Combat System program, maintaining readiness in Australia’s Collins Class subs; Boeing’s P-8 Poseidon aircraft, guarding the nation’s maritime approaches from above; or Lockheed Martin’s Aegis combat system on board the Hobart Class Destroyers—the ongoing cooperation between Australian and American defense forces and defense industry is clear to see. And cooperation stokes wide-reaching benefits within our communities—it creates jobs, spurs innovation, and transfers skills. And, of course, it boosts our interoperability. When our troops are on the ground, or at sea, working together to support our common goals, it’s this deliberate cross-pollination of our programs that delivers enhanced interoperability.

So here at Pacific 2017 this week, we can anticipate the next generation of cutting edge partnerships will develop in support of the U.S.–Australian Alliance.

There is an exciting range of companies here displaying their capabilities—from the largest and best known examples, including and Northrop Grumman and L3 Technologies; to more recent arrivals in General Atomics and Huntington Ingalls; and those brand new offerings brought here today with the support of the Virginia Economic Development Partnership. Collectively, there is very little in the realm of naval capabilities these American companies cannot bring to the table—and it is technologically the best product on offer anywhere in the world today.

One key, underpinning characteristic of our relationship is the mutual pursuit of innovation. Raytheon already knows this—in August they launched a CAVE Automatic Virtual Environment in Canberra. Using virtual reality techniques, stereoscopic projection and 3D graphics, the Canberra CAVE can reduce design costs, encourage the early identification of defects and promote cross-functional teamwork. It’s not quite a flying car just yet, but I think maybe with the CAVE we could get there—this capability has firmly planted industry design in the 21st century. And it can also be linked to similar facilities in America, like those CAVEs already in Boston and Tucson, to allow real-time U.S.–Australian collaboration on defense-related engineering projects.   But Raytheon’s certainly not alone—either in innovation or collaboration—and similarly this week we will witness the unveiling of the Northrup Grumman Blue Cube here in Australia. Blue Cube will present an immersive joint force visualization, demonstrating evolutionary mission effectiveness to provide the ADF with the information edge.

The 30 American companies on show here today recognize the value of building trans-Pacific partnerships. In 2016 alone, Australia spent more than US$1.34 billion on U.S. foreign military sales, including in investments in partnerships with the U.S. defense industry.

I mentioned at the outset our historical relationship. I think it’s important to highlight that the United States and Australia did not find ourselves on the same side of the battlefield by chance. Our nations were each founded on shared principles of basic freedoms, the rule of law, and democracy. And we know that when these rights are enhanced globally, it fosters our own security at home.

Late last year, Pacific Commander Admiral Harry Harris aptly noted that “. . . just as Australia and the United States stood together against tyranny and oppression in the 20th century, the world expects no less in the 21st.” This can’t be maintained alone—we need the creativity and drive of industry working hand-in-hand with the experience and capacity of defense. We need to remain on the front foot. And we need to be at the vanguard of new technological developments. That’s why we’re here today.

Thank you all for opening the U.S. Pavilion with us this morning and I wish you all the best in your ventures this week.