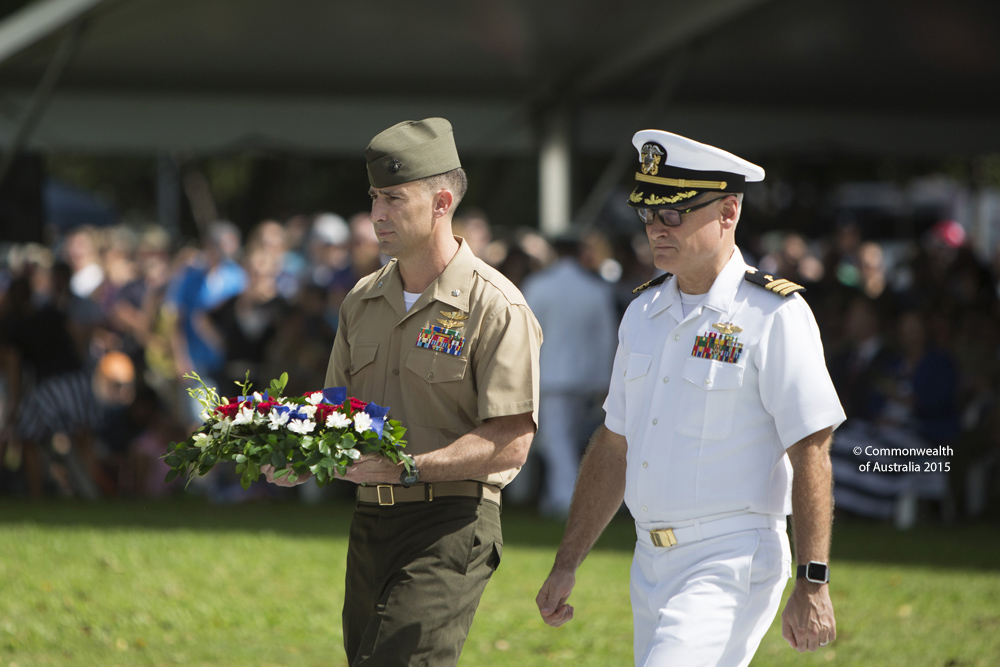 Lieutenant Colonel Matthew Emborski and Commander Jon Conroe Chaplain Corps (USN) lay a wreath together during the 75th Anniversary commemorative service for the Bombing of Darwin held on Sunday, 19th of February 2017 at the Darwin Esplanade.

Three short words that carry a lot of weight.  They oblige our generation to remember all those who sacrificed their lives on our behalf.  That we enshrine and recall those such as the 88 souls lost in this beautiful harbor as the USS Peary went down fighting the morning of February 19, 1942.  They were very far from home, yet at home helping defend a nation with which we share so much.

“Lest we forget” is an imperative.  An obligation that we remember and preserve the legacy of those who defended our nations here in Darwin, as well as in Guadalcanal, in the Coral Sea, and on the Kokoda Trail.  What is their legacy?  Seventy-two years of peace in the Pacific region, cemented by strong and lasting alliances.  A thriving democracy in Japan, and the ever-deepening friendship between our three nations.  Could those soldiers, sailors, and civilians in Darwin on that awful day in 1942 possibly have imagined the gift that they would bequeath us by standing up to authoritarian aggression?

“Lest we forget,” together we still stand up to authoritarian ideologies.  In Iraq and Afghanistan we continue the battle against those who know they cannot win through the power of their argument, and so chose terror over words.  Bombs over ideas.

“Lest we forget” is shorthand for what President Abraham Lincoln said in his Gettysburg Address following the bloodiest battle of the American Civil War.

“We cannot dedicate – we cannot consecrate – we cannot hallow – this ground.  The brave men, living and dead, who struggled here, have consecrated it, far above our poor power to add or detract.  It is for us the living, rather, to be dedicated here to the unfinished work which they who fought here have thus far so nobly advanced.  It is rather for us to be here dedicated to the great task remaining before us – that from these honored dead we take increased devotion to that cause for which they gave the last full measure of devotion – that we here highly resolve that these dead shall not have died in vain.”

So the torch is passed to us.  It is up to us to leave this region, this earth, to the next generation more secure, more prosperous, better than we received it.  We have those that gave their all to remind us that this is what they did.