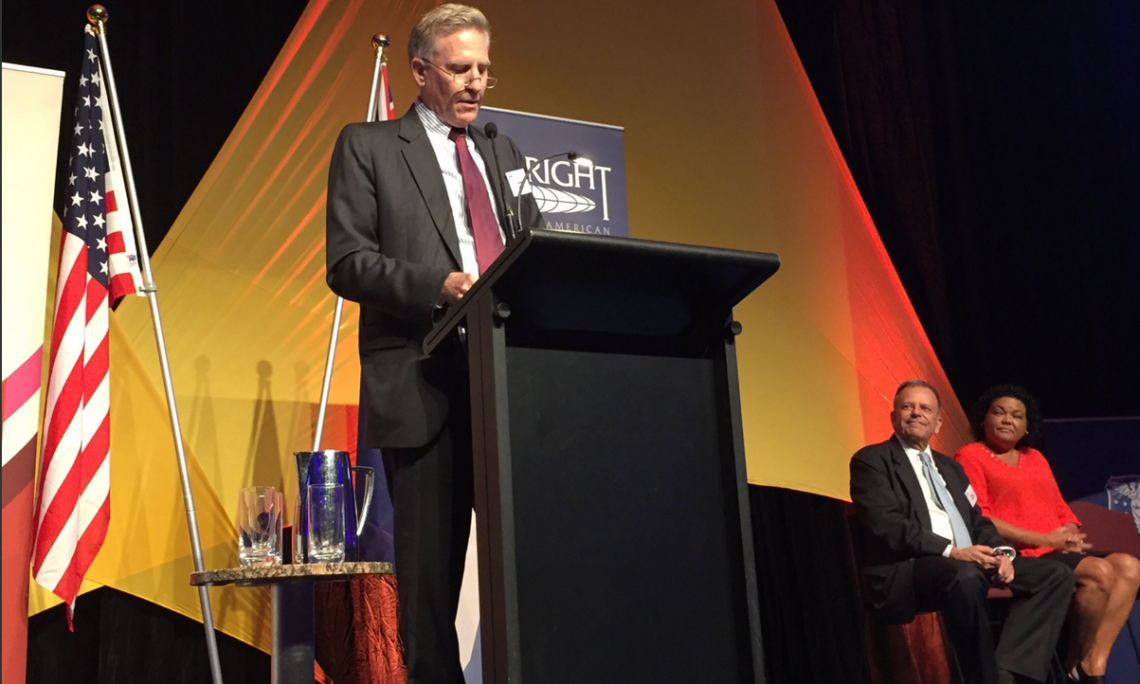 I am so honored to be here this evening. You see, without Fulbright, I wouldn’t exist.

My father John Karousatos was among the first Greek Fulbright scholars to study in America. He arrived at Emory University in the early 1950s to study chemical engineering.

Now I don’t want to encourage this, but he did not return to Greece. Instead, he joined the U.S. Army. His best friend in the Army was from Brooklyn, and his friend’s girlfriend had a friend. You know what happens next. There was a double date, and before too long, the Fulbright Scholar from Greece was married to a Jewish girl from Brooklyn and they started a family in the Bronx.

So, I owe a debt to Fulbright. A debt that can never be repaid. I am sure I am not the only person to feel this way.

Over the last 50 years, the Fulbright program has sponsored more than 5,000 American and Australian scholars. While few, if any, are household names today, all made their mark. Today, on International Women’s Day, it is of particular note that the very first Australian Fulbright scholar was a woman – Dorothy Munro. Dorothy created the first ever course in Pacific history taught in Australia.

In recent decades, Fulbright has played an important role in many compelling U.S.-Australia innovation success stories. Australian and American Fulbright scholars have made important contributions to the fight against devastating diseases and to global efforts to combat climate change. Fulbright’s longstanding relationship with the CSIRO has driven groundbreaking scientific research across the board: from agriculture to biomedicine to outer space.

And, Fulbright continues to sustain high-level scholarship and unleash creativity in the arts and humanities.

As we saw in tonight’s showcase, current Fulbright scholars are pursuing their passions undersea, on ranches, and in the high desert; in labs and libraries; in courts and hospitals; and, in at least one case, in a “hackerspace.”

Thank you to all the scholars here tonight for the contribution you are making not just to your various fields of expertise, but to the unique partnership between the United States and Australia.

Thank you to the Board and volunteer members of the many Fulbright selection committees for their hard work to make our most important and prestigious U.S. government-supported exchange program a success.

And, thank you to the Australian-American Fulbright Commission’s new Executive Director Tom Dougherty. The diplomatic corps’ loss is Fulbright’s gain. Tom continues to use his considerable skills in the service the U.S.-Australia alliance.

The word alliance is often overused. But not here. The U.S.-Australia relationship is an alliance in every sense of the word. Our alliance is not just between our militaries. It is an alliance of nations and peoples who share more than just an ocean. The alliance fuels our mutual economic growth through expanded trade and investment. It supports scientific inquiry and technological innovation. And, it promotes valuable cultural and educational connections – such as Fulbright – that enrich our societies.

As William Fulbright once said: “Education exchange can turn nations into people.” And, the people of Fulbright represent the best of our two nations.

Congratulations to all the scholars, past and present, and thank you!

Now, I have the pleasure of presenting this year’s Australian and U.S. Distinguished Chair and Senior Scholars.