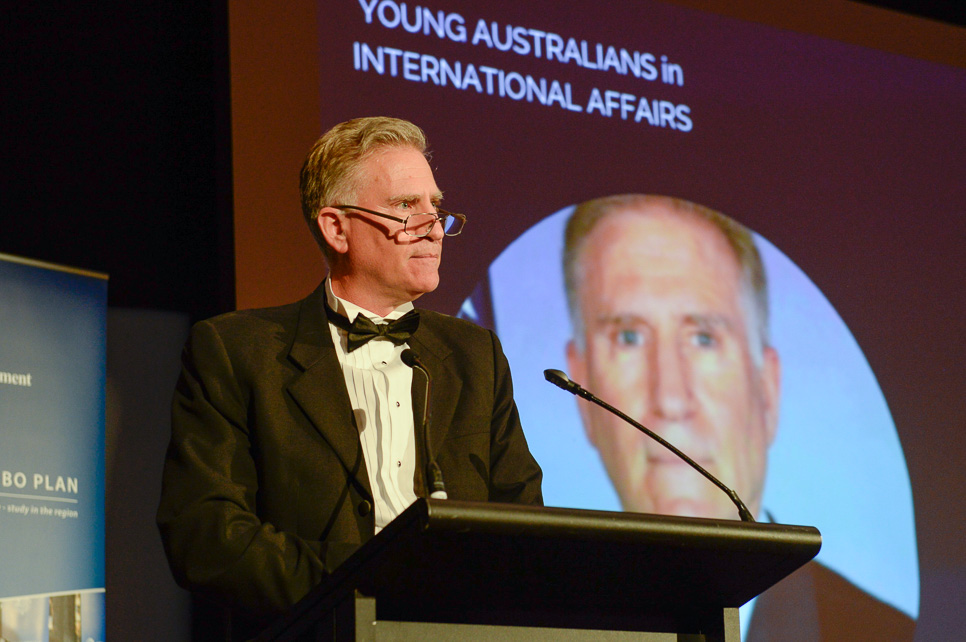 Thank you, Lauren, and I’d also like to acknowledge Mercedes Page, CEO of Young Australians in International Affairs.  Thank you for the invitation to speak.

I could start tonight by going into what an honor and a privilege it is to engage with such a distinguished group of young people—which is of course true.  But, this evening I’m not here to praise you.

I want to challenge you. To “shirt front” you. I’m here to talk directly to you, as Australia’s next generation of leaders. Because if you are tomorrow’s leaders, the fate of the world is in your hands.

But first, a story.

Around 40 years ago, as a high school student on the other side of the world—yes, I’m a little older than you—I saw, first-hand, the impact that dedicated, active young people can have in their community.

Under the military junta in Greece, I saw friends of mine—school kids—picked up by police for things as ridiculous as having hair that was too long.  Something that was only possible because those in charge had unfettered power over the people.

The junta had been underway for more than six years when a group of university students went on strike in 1973.  They barricaded themselves inside and broadcast a radio message across the city.  They spoke of “our common struggle against the dictatorship and for democracy.”

The uprising broke in violence on the third day, but it triggered the beginning of the end.  Greece held democratic elections exactly twelve months later.

It’s worth noting that the Greek government was more efficient under the junta—certainly more so than it might be now—and yet we don’t see any Greeks in the streets today demanding its return.

In 1973, I walked down those very streets, still tinged with tear gas; I saw young people, barely adults themselves, take a stand for their right to be heard.  And having lived through this, I am frankly baffled by the growing disdain for democracy today.

As astute young Australians, I trust this is equally disturbing to you, but that’s all the more reason for us to have this discussion—something needs to be done in defense of the idea of democracy, and I suggest all of us of who believe in democracies do it together.

Let’s look at the facts.

According to this year’s Lowy Poll, less than half of 18–29 year olds think democracy is preferable to any other kind of government.  A full fifth of your age bracket claim that ‘for someone like me, it doesn’t matter what kind of government we have.’

Pericles had a saying for people like that: ‘We do not say that a man who takes no interest in politics is a man who minds his own business; we say that he has no business here at all.’

This is not an isolated problem and I certainly don’t mean to single out Australia.

En masse, publics world-wide increasingly feel like they have no voice in politics; that governments are not acting in their interests.  It’s troublesome though—on many levels—that this growing sense of disillusion is higher in democracies than in non-democracies.  Indeed, the recent Democracy Perception Index found 67% of Australians believe their government ‘rarely’ or ‘never’ acts in the public interest.

Similarly, publics worldwide are questioning if democratic governments can work at all in this day and age. Look—I know you can point at the past three weeks of Australian politics alone and say, “well come on.” And people say the same about what’s going on in the U.S., the UK, or parts of Europe.

No doubt our democratic process of governance is often a dog’s breakfast of process, and our elected representatives sometimes truly disappoint us.  But, at the end of the day, those officials know they are at the mercy of the electorate, and we can chuck them out.

As the famous quote goes, “Democracy is the worst form of government, except for all the others.”  So I assert that no matter how off-putting the process of governing can be at times, democracy remains the form of governance most responsive to the voice of the people, allowing for change without the violence, oppression, and persecution of those with whom we disagree.

A few examples from history of what our rights and responsibilities look like:

Around 250 years ago, 13 small British colonies in North America were having a little problem around the concept of ‘taxation without representation.’  So they did something.

And 120 years ago here in Australia, women did not have the right to vote.  Your great-grandmothers were denied the fundamental right of choosing who best represented what they needed, wanted, and believed in.  So they did something.

Isn’t that the true value of our liberal democratic societies—the power to say and to do something when we don’t like what’s going on?

America’s founding fathers threw off the comfortable protection of a powerful empire to protect their individual rights to have a say on the policies and decisions that affected their everyday lives.  Women around the world made themselves heard—and continue to make themselves heard—to protect their right to have a say.  To not only express their voice in the most powerful way possible, but to be the voice at the highest levels of government.

This past week, we observed two anniversaries.  One was 9/11.  The other was the 75th anniversary of our Embassy’s dedication by Eleanor Roosevelt here in Canberra, during the darkest days of World War II.  It was a timely reminder of how far we’ve come in just a few short generations.  In her lifetime, Eleanor Roosevelt fought tirelessly for the rights of the neglected, the powerless, and the scorned.  Enduring constant opposition at every turn, she persisted undaunted.  She was a powerful advocate for women’s rights; for minorities’ rights; for refugees’ rights.  Eleanor fought a lifelong battle for inclusivity—a world in which everyone deserves to have their voice heard.

And yet, here we are in 2018, and despite these 75 years of incredible progress, people around the world continue to languish in jail for speaking against their governments. For being in the minority.  For dreaming of democracy.  We still desperately need the Eleanor Roosevelts of the world and I imagine we always will.  Are there any here today?

So seeing how fast things can change for better or for worse, it begs the question-where are we going to end up within your lifetime?  Ladies and gentlemen, it’s up to you.  I personally hope, wherever it is, it’s somewhere the U.S. and Australia go together. I’m committed to increasing opportunities for us to do that; for us to listen to each other as we work to support each other.

By the very virtue of your being here tonight, you distinguish yourselves as leaders of your generation.  You care about what affects us—in Australia and in the world.  You clearly give a shit.

That brings me to my big ask of you tonight: go home.  Go back to your communities, your families, your friends, and be the one to do something.  Start a conversation on what’s going on and what we need to change, and don’t shut out the voices of those with whom you disagree.  Often there just needs to be that single spark that ignites a flame—one that changes a community, a country or the world for the better.  Our system is designed to respond to citizen’s demands.  So demand.

When we give up on democracy, when we give up on listening to one another, then we outsource our responsibilities and the ability to shape our own destinies.  But the antidote is in democracy’s very DNA.  In his Gettysburg address, President Abraham Lincoln described our system of government as ‘of the people, by the people, for the people.’

Democracy, by its nature, demands compromise and consensus to land upon the best course of action of, by, and for the people.

So tonight, I challenge you to take up your responsibilities as citizens.  I challenge you to participate in and defend our democracies.  As the late, great Aretha Franklin said, “Sometimes, what you’re looking for is already there.”  And I’m here now looking for you.  We can’t take democracy for granted, because bad things happen when we do. So it’s going to take all of us.   It’s going to take you.  Our democracies, and our world, depend on it.