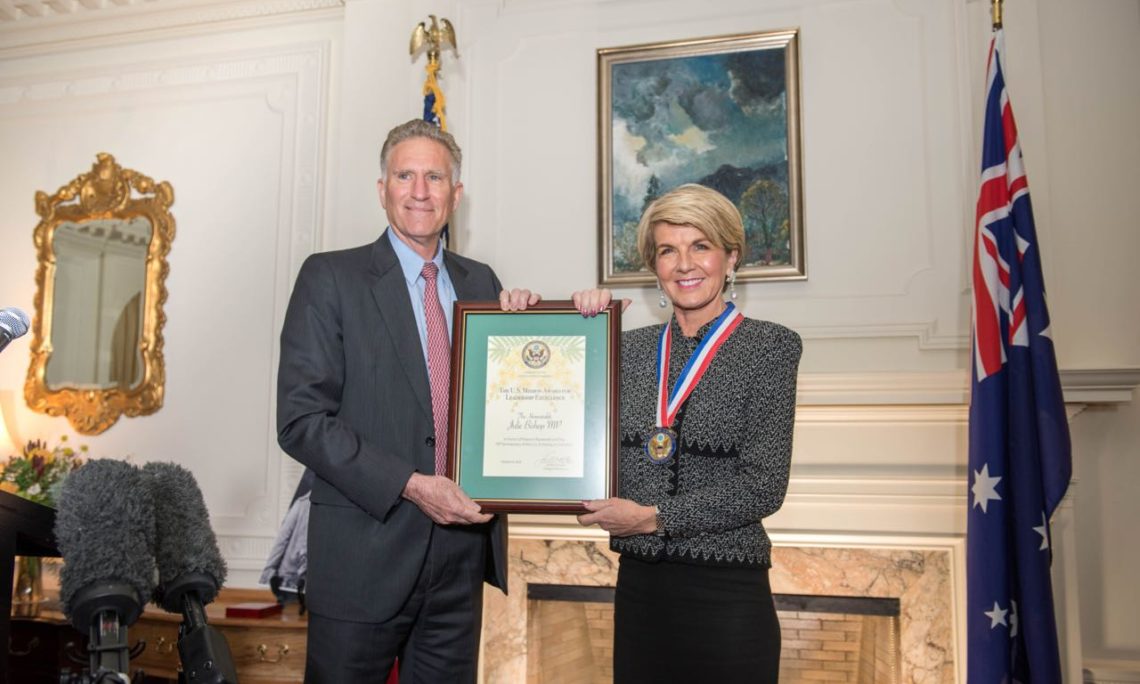 Ladies and gentlemen, it’s an honor to present this inaugural award for Leadership Excellence in honor of the 75th Anniversary of Eleanor Roosevelt’s dedication of the very ground on which we stand this evening.

We are in a time of change.  A tipping point where the voices of women are being raised around the world — and what’s more, they’re being heard.

As strong democracies and world leaders, this moment in history is something for Australia and the United States both to celebrate.  Speaking out; listening to others; participation by all — are these not the core tenets of our democracies?

Like all political systems, democracies need leaders. We need those who can show us the way towards our better selves.  Who can solve problems and bridge divides. Eleanor Roosevelt, despite her lack of any official title, was such a leader. In early 1933, the “Bonus Army”, a protest group of World War I veterans, marched on Washington for the second time in two years, calling for their bonus certificates to be awarded early.  The previous year, President Herbert Hoover had ordered them dispersed, and the US Army cavalry charged the veterans and bombarded them with tear gas.  This time though, First Lady Eleanor Roosevelt visited the veterans at their muddy campsite, listening to their concerns and singing army songs with them.  The meeting defused the tension between the veterans and the administration, and one of the marchers later commented, “Hoover sent the Army. Roosevelt sent his wife.”

Although we have a very long way to go, we are now in a time when there are more opportunities for women to achieve positions of formal responsibility. With this award and the inaugural Fulbright scholarship in honor of Eleanor Roosevelt’s leadership excellence, the U.S. and Australia together are supporting strong young women, like Eliza Cowley, who will not just follow in Eleanor’s footsteps but take up the mantle of leadership and set the course for new heights we have yet to realize.

The Hon. Julie Bishop was first elected to the seat of Curtin in 1998 and her first speech to Parliament captured the central tenet of democracy.  She said: “I have always had an intense conviction that individuals can make a difference to the life of their times.”

Julie Bishop knew then the power each person wields, and what a difference she has made.  In just the past five years as Foreign Minister, Julie has promoted greater regional cross-pollination through the New Colombo Plan; worked steadfastly in holding Russia accountable for the downing of flight MH-17; and laid out Australia’s framework for the next decade to come in the 2017 Foreign Policy White Paper. Most importantly for me, she has been a tireless advocate of the relationship between our two nations and the positive difference our democracies make in the world.

Shortly after I arrived in Australia, I went with Ambassador John Berry to tell Julie that he was returning to the US a few months before our 2016 elections and I would be Charge’ d’Affaires.  Now, I had heard about her “laser-eyed stare.”  Indeed, as a long-time customer of late night NYC subways I had my own version which I called my ‘don’t mess with me because I’m ever crazier than you’ stare.  So when Julie turned her gaze to me I was ready – but she said “Jim, I plan to treat you like I would any ambassador.’  And she has.  For which I will always be grateful.

Example is the best lesson there is, and tonight, in honor of Eleanor Roosevelt, I have the pleasure of presenting the Hon. Julie Bishop with the inaugural U.S. Mission Award for Leadership Excellence.

Julie, if you would join me please.