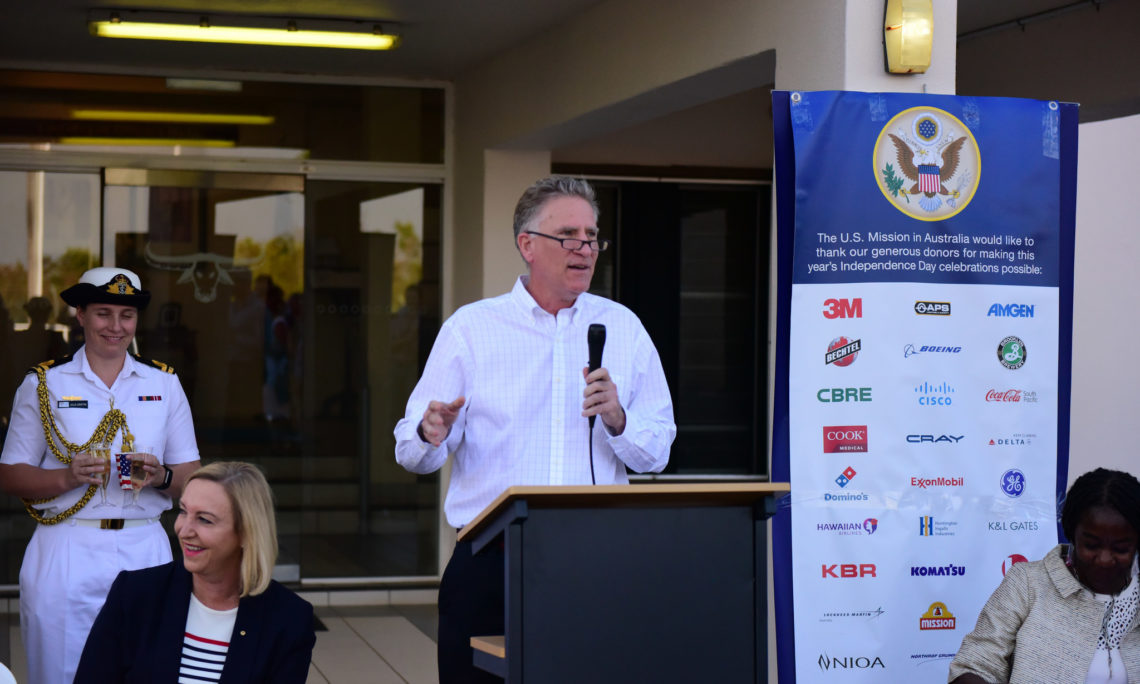 Ladies and gentlemen, thank you for joining us to celebrate America’s Independence Day, and thank you to our hosts here at Larrakeyah Barracks. I wish to acknowledge the people of the Larrakeyah Nation, on whose land we are gathered today. I pay my respects to their Elders, past and present.

This year July 4 marked two significant events in history: the 242nd birthday of the United States of America; and the centenary of the Battle of Hamel—the first time Americans and Australians fought side-by-side.

In many respects, the first milestone led to the second.
The United States was born on July 4, 1776 on the basis of a few simple yet radical ideas:

That all men are created equal.
That each citizen has the inalienable right to life, liberty, and the pursuit of happiness.
That to secure these rights, governments are formed by the consent of the governed. Or as President Lincoln remarked 87 years later: “…. government of the people, by the people, for the people.”

Our Founding Fathers wrote a Constitution to establish a system of government and institutions that would assure and implement these principles. This is the rule of law and democracy.
It was the decision to defend these principles—to make the world “safe for democracy”—that saw the US join Australia and other democracies in the Great War and that, in 1918, would bring our troops to Hamel under the command of a great Australian, General Sir John Monash.

Our two nations have chosen to work and fight together to safeguard democracy ever since—as Darwin perhaps knows better than most. Just down the road in Bicentennial Park is a memorial to the USS Peary and its men who lost their lives off this shore during the Bombing of Darwin.

Around our nations are countless similar memorials and cenotaphs—from the Australian War Memorial to Arlington National Cemetery and in almost every town in between. They’re monuments not only to those our nations have lost, but to that which they fought to protect.

Each and every name remembered by these memorials reflects the value democracies place on the individual; at the apex of our governments’ power and purpose is the individual citizen. This is the heart of our system.

Today, our partnership continues here in Darwin. This year brings our largest ever Marine Rotational Force through the Top End—around 1500 Marines who are right now sharing capabilities and building friendships with their ADF counterparts.

It’s evidence of not just our sustained commitment to each other, but our shared vision for global and regional security. The principles the diggers and doughboys fought for in northern France in 1918 are still those we defend today, and will keep on defending tomorrow. The institutions all around us are testament to the sort of society we each value and will fight for.

It is now my pleasure to welcome Her Honour, the Administrator of the Northern Territory to say a few words.