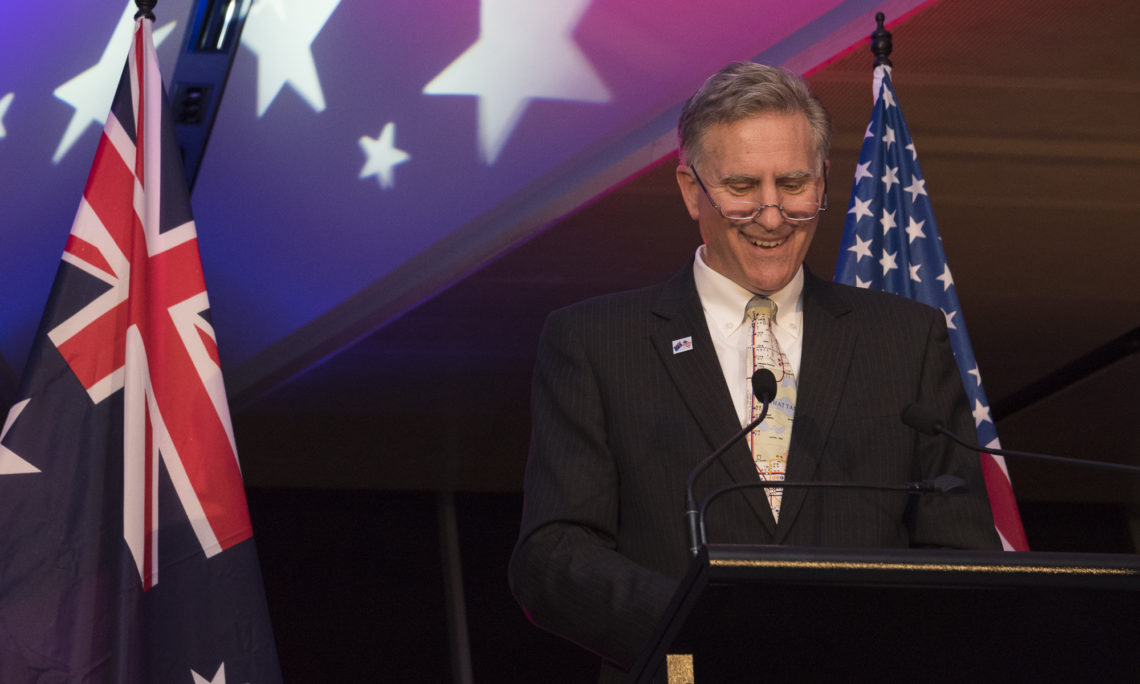 Good evening everyone, and welcome to our celebration of America’s Independence Day. I would first like to begin by thanking our hosts, Canberra Airport Group, and specifically Terry Snow and Stephen Byron whose amazing vision and entrepreneurship have created this beautiful facility that we’re now in; the new international terminal which, for many of us, is the great hope for faster connections to our home countries.

I’ve been asked why we are holding our celebration here instead of our embassy as we have traditionally done. Let me put to rest the rumor that it’s because we like the initials of Canberra International Airport. But we do have some reasons. First, we decided that while holding outdoor events in Canberra in July is… exciting, this year we would forego the game of hypothermia roulette. Second, we have taken the opportunity of a gap in ambassadors to replace the floors and bathrooms in the ambassadors’ residence, which seemed like a good idea. While this project is at last complete—and the floors look great—anyone who has done home renovation knows it’s wise not to plan on a specific date of finishing. But most especially, we thought having our big annual birthday bash at this particular location would be a good opportunity for us to remind each other of why the Australia–US relationship is more than a military alliance.

But the connection between our nations goes far beyond our business, cultural, intelligence, or even military ties—as important as those may be. We are bound by a shared political philosophy regarding the relationship between citizens and their government. This is best expressed in the words published in Philadelphia 241 years ago today:

“We hold these truths to be self-evident, that all men are created equal, that they are endowed by their Creator with certain unalienable Rights, that among these are Life, Liberty and the pursuit of Happiness.— That to secure these rights, Governments are instituted among Men, deriving their just powers from the consent of the governed.”

This year marks the 75th anniversary of the Battle of the Coral Sea, where our Diggers and GIs, sailors and airmen, sacrificed to preserve these foundational principles contained in our Declaration of Independence. Our militaries—our governments—continue to work together to preserve and defend those ideals, for ourselves and for our posterity.

Now, our guest of honor tonight is a long-time advocate for our bilateral relations. Dennis Richardson has devoted his entire professional life to further the interests of his nation. Who has, with clear eyes and cold logic, engaged with the international community to advance Australia’s security and prosperity. Why should we Americans celebrate this civil servant whose interactions with us are sometimes described as ‘frank’? Sometimes ‘brutally frank.’

Because, like Australia in general, he has earned our trust and is a true friend. The type of friend who has such confidence in the relationship he can tell us what he thinks we need to hear, not necessarily what we want to hear. And after that we’ll go and have a beer. He and Betty are still remembered in Washington as among the most hospitable hosts and most entertaining of guests. Dennis has been lauded all over Canberra since he announced his retirement. But, given his long association with the US, especially his time as ambassador, we feel we should lay claim to a small bit of him as well. And since this is, after all, a birthday party, it seems only fitting that someone get a gift.

So Dennis, from one civil servant to another, with profound respect for all you have accomplished for Australia, and for your tremendous contributions to the ties between our nations, I’d like to present to you this flag that was flown over the US Embassy in Canberra on ANZAC Day 2017.