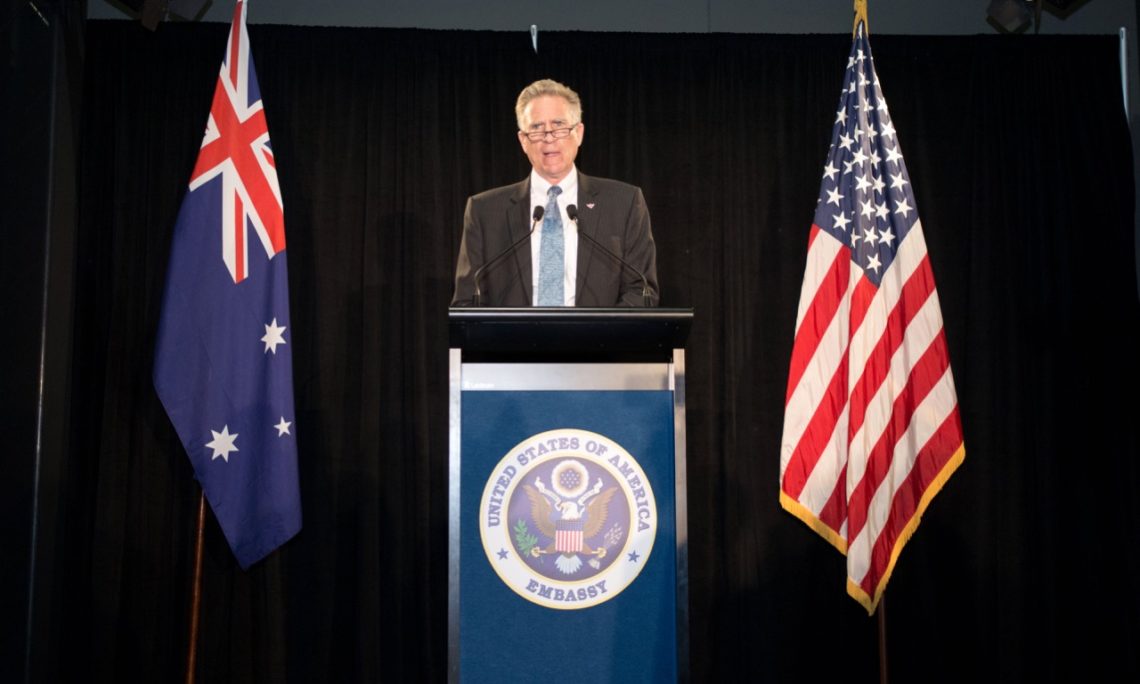 “Ladies and gentlemen, distinguished guests, thank you for joining the U.S. Embassy this evening as we celebrate America’s Independence Day.  I want to begin by thanking Dr Nelson and the team at the War Memorial for hosting our Independence Day event at this remarkable, hallowed venue, and for the great cooperation and assistance they have provided.

the 242nd birthday of the United States of America; and the centenary of the Battle of Hamel—the first time Americans and Australians fought side-by-side.

In many respects, the first milestone led to the second.

The United States was born on July 4, 1776 on the basis of a few simple yet radical ideas:

Our Founding Fathers wrote a Constitution to establish a system of government and institutions that would assure and implement these principles. This is the rule of law and democracy.  It was the decision to defend these principles—to make the world “safe for democracy”—that saw the US join Australia and other democracies in the Great War and that, in 1918, would bring our troops to Hamel under the command of a great Australian, General Sir John Monash.

Our two nations have chosen to work and fight together to safeguard democracy ever since.

Of course, at the time of Hamel, Australians had already been engaged on the Western Front for some time.  Two years earlier, during the devastating offensive in nearby Pozières, a dying soldier asked the question:  Will they remember me in Australia?

The answer to that question is all around us tonight.  It is an honor to be hosted by as revered an institution as the Australian War Memorial—a monument not only to those this nation has lost, but to that which they fought to protect.  Each and every name written across these walls reflects the value democracies place on the individual; at the apex of our governments’ power and purpose is the individual citizen.  This is the heart of our system.

I was moved by a comment the Prime Minister made here earlier this year.  He observed: “when the doors of the Parliament are flung open, from the very Cabinet room itself, you look through the Parliament at the War Memorial—a constant reminder of how hard fought and hard won those freedoms that we exercise there, have been.”

It’s a striking analogue to our own National Mall, which unfurls from the steps of the Capitol Building and on to Arlington National Cemetery, paying homage to Americans who gave the last full measure of devotion to our founding principles.

The principles the diggers and doughboys fought for in northern France in 1918 are still those we defend today, and will keep on defending tomorrow. The institutions all around us, from Canberra to Washington, are testament to the sort of society we each value and will fight for.

It is important to note that when the United States entered the Great War we were in part reciprocating the earlier assistance of France, our first ally, who supported America’s cause in the Revolutionary War. They are our oldest ally; and they are our ally still.  Please welcome the Ambassador of France, His Excellency Christophe Penot. “