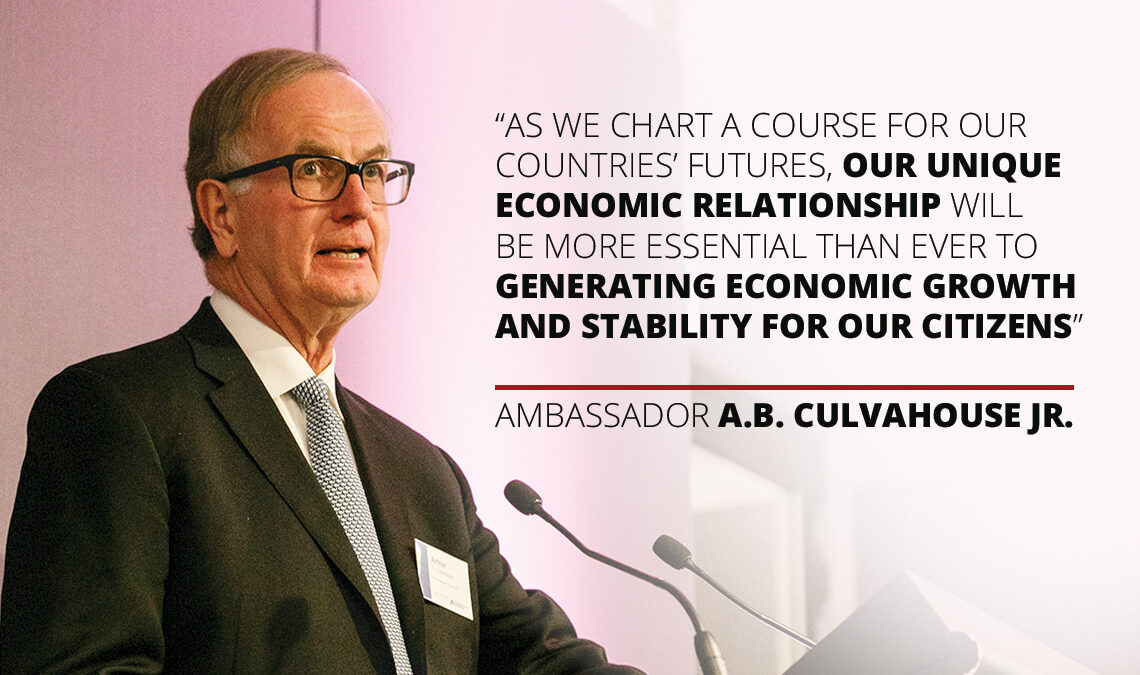 Thank you, April, for that introduction. Thank you, Dr. Nelson as always, for those kind words. Let me thank all members and representatives of the American Chamber for this report, and also to Deloitte for the contents of the report. It’s extraordinary, it’s brilliant.

It’s everything that we hoped for and more, and I know I speak for everyone at the U.S. Embassy, for my colleague Sharon Hudson-Dean, the Consul-General here in Sydney, to Doug Sonnek, our Economic Counsellor, to the many other colleagues at the embassy who thought that we needed to have some backing when we repeatedly say, as we repeatedly said, since I have been here, that we are Australia’s largest and most important economic partner, that we needed to have some independent confirmation of that, and we got it. And more so. And I think this is a good roadmap for the future.

I also want to thank Minister Birmingham, and I’ll try to be brief, because he will have important things to say, and our other accomplished panelists, I look forward to learning from them.

This report pulls together all aspects of the U.S. and Australia economic relationship, together, in the same place at the same time.

We’ve all glimpsed pieces of this over the years, but this is just truly extraordinary, in pulling it together in ways that I can tell you, at the U.S. Embassy, who have studied this for years, did not fully understand, so good on you, as they say in this country.

It makes the case—clearly and unambiguously—that the United States is Australia’s most important economic partner.

There are some important figures here, but I want to repeat one that Dr. Nelson just cited, which is that the United States contributes about seven percent—that’s 131 billion Australian dollars—to Australia’s GDP each year. Each year.

These are well-paid jobs, too: Australians employed by U.S. companies earn over $100,000 annually, on average—whether that company is a trillion-dollar company like Google, or a five-person startup with big dreams.

Much has changed, as Dr. Nelson said, since the report was commissioned late last year.

And I am confident that our economic partnership will only increase as our two countries and the global economy recover from the pandemic. This is our challenge, but it is also our opportunity.

In the last decade, there has been a tendency to separate economic security and strategic security.

Now, many are finding that these transactions often come with hidden costs.

And it’s not just about who has the money, it’s about who you trust. It’s about shared values. It’s about 100 years of mateship, in our case.

And we trust each other.

And Australia trusts that that U.S. businesses will respect its sovereignty and its laws.

We have faith in each other’s free flow of knowledge, people, and capital; our respect for human rights; our strong democratic systems; and our respect for intellectual property.

But even if one were to look only at a cold, hard, dollars-and-cents view, the primacy of our economic partnership stands out.

And I believe wholeheartedly that this will continue into the future.

Investment, by its very nature, is for the long haul. And U.S. investment has been precisely in those areas where Australia has a comparative advantage—in innovation, and in other areas which will emerge as critically important in the post-COVID world.

Of course, trade is essential.

And I note from this report that 80 billion dollars of trade flows each year between the United States and Australia. But let me point out that that trade is highly diversified, and consists predominantly of high value-added goods and services, such as aircraft parts, medicines, and IT services.

And let me pause right here, and say, unmistakably, Australia will never see the day when a United States Ambassador threatens to withdraw from trading with, and investing in, Australia.

That is because investment represents a long-term commitment to partnership—to launching new technologies, to developing local talent, to adding value for all parties involved.

And investment is built on shared values.

An AmCham member survey undertaken in late June showed that almost half of the respondents anticipate increasing their investment in Australia over the coming year.

Three quarters of those respondents believe that their investment in Australia will increase in the next three years.

After a summer of record bushfires and through a worldwide pandemic, the United States continues to believe in the Australian economy, the Australian people and will continue to invest in that economy, and those people.

This is nothing new.

For the past several years, American companies annually spent over one billion dollars in R&D in Australia, each year.

That’s one billion dollars on healthcare research, frontier technologies, and projects that we don’t have the vocabulary—I certainly don’t, at my advanced age—to describe yet, because they’re that visionary.

That’s one billion dollars that stimulates productivity growth in Australia, and brings Silicon Valley and Australian talent into the same room—or into the same Zoom meetings—to innovate.

I’d like to reiterate again how timely, how glad I am to be here today and how timely it is.

I’m off tomorrow to fly to the United States, where next week I will join Foreign Minister Payne, and Defence Minister Reynolds, at the annual bilateral 2+2 meetings with our Secretary of State and our Secretary of Defense.

And we’re going to be discussing the roadmap, strategically, and economically, in the post-COVID world.

To give just one example—and Simon Birmingham will think that, “I’ve heard this before”—I believe that we need additional collaboration and ongoing collaboration in securing critical mineral supply chains.

Critical minerals are not only becoming more critical, but both our countries will benefit economically from more robust, transparent, and standards-based supply chains.

There’s plenty of hard work to be done, by both the private and public sectors, but I believe everyone in both countries is up to the task.

Today, we have an opportunity.

Today, we have an opportunity to drive open, innovative, and resilient markets.

We have an opportunity to grow our partnerships in the Indo-Pacific.

And we have an opportunity to bring more jobs, more productivity, and more solutions to the region and to the world.

The United States and Australia are stronger and more prosperous together—and we’re just getting started.