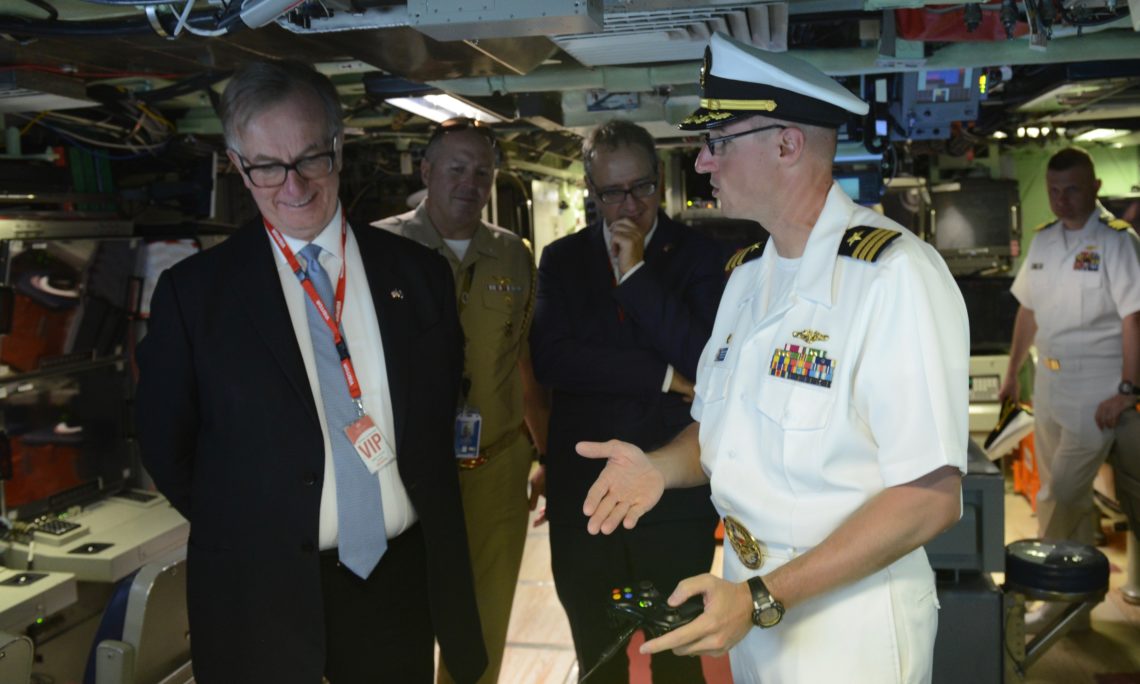 Ambassador Culvahouse toured the USS Texas (SSN775), a state-of-the-art submarine, in Perth, Western Australia on January 31. The Virginia-class fast-attack submarine is visiting HMAS Stirling Naval Base near Rockingham for a scheduled port visit, as part of its routine patrol in the Indo-Pacific region. It has approximately 130 crewmembers. Ambassador Culvahouse said the visit of the USS Texas demonstrated the strength of the U.S. and Australia alliance and the geostrategic importance of Western Australia.

“Australia and the United States are the closest of friends, and our relationship is unbreakable,” said Ambassador Culvahouse.
“When a U.S. vessel arrives here, its crew isn’t met with fear or suspicion, but with open arms.
“Western Australia plays a vital role in the Indo-Pacific region and the U.S. is grateful for that.”

“This submarine is the third U.S. Navy vessel to visit Western Australia in the past 12 months, which shows the important and close relationship between our two countries,” said Consul General Gainer.
“Perth is a beautiful city and we’re grateful to Western Australia for opening its doors to American Navy personnel.”

“It is a pleasure to be here in Australia, one of our oldest and closest allies,” said Commanding Officer Mike Dolbec.
“For many of our crew, it is their first time visiting Australia. They can’t wait to explore the West coast, especially Fremantle.”

A number of submariners also volunteered at hunger relief organization Foodbank WA during their visit. Working alongside Foodbank staff, crewmembers helped sort and package food items at the charity’s Perth Airport warehouse for distribution to those in need. Ambassador Culvahouse travelled to the facility where he commended the submariners for giving back to the WA community.

“It is a pleasure to visit Foodbank – an organization that began in the United States and has grown around the world, including in Australia,” said Ambassador Culvahouse.
“U.S. Navy personnel are extremely dedicated in their service, both at sea and on land with activities such as lending a hand here at Foodbank.”

Joining Ambassador Culvahouse, Consul General Gainer said the visit was one of many examples of the U.S.-Australia alliance in action in WA.

“The U.S. and Australia have strong defense ties but equally as important are the close connections and shared values between our people,” said Consul General Gainer.