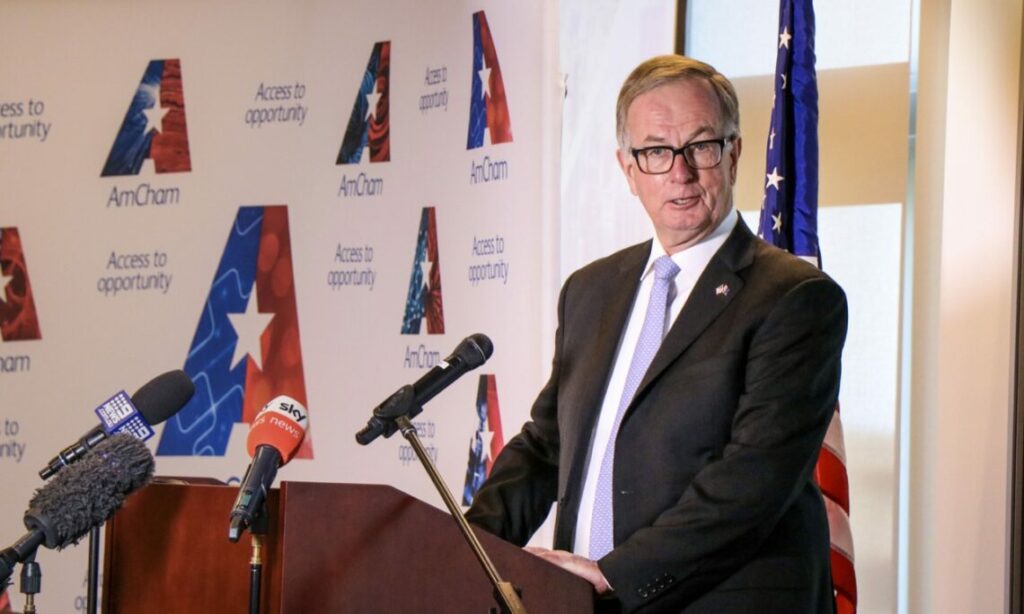 Thank you Bill. Ladies and gentlemen I’d like to begin by thanking AmCham for their sponsorship of this event and for their sponsorship of the Building Prosperity report. It’s a seminal report, it’s a really impressive piece of analysis and not just because I agree, it confirms what we always claimed that the United States is Australia’s largest and most important economic partner, but it does it favourably with lots of facts and figures to back it up. But I also want to thank the WA parliamentarians and other government officials and former officials who are here and of course Minister Pitts and Minister Taylor for appearing by video.

I have to pause for a minute. My full title as Ambassador to Australia is Ambassador Extraordinary and Plenipotentiary. Extraordinary is pretty obvious but most Ambassadors don’t know what plenipotentiary means when they first (inaudible) Political Ambassador. But what it means is that you can bind the United States, that you could sign official documents that bind the United States as the President’s personal representative.

The only time in which I’ve had to do that since I’ve been in Australia and of course originally (inaudible) was on a co-sign with Minister Taylor an agreement by which Australia is temporarily leasing space in our strategic petroleum facility to meet his energy requirements and I was proud of that.

This is my fourth visit to Perth. And I think the time on this trip is particularly opportune, I’m among friends here today. And in that spirit, amongst the best of mates. Something that I know has been said often but is well worth repeating – ours is unbreakable alliance. The United States commitment to Australia is a sacred trust. A profound and solemn obligation. Our alliance is a matter of national priority of the United States of America. And after two years as the US Ambassador here, it’s something I take very personally.

Before they send us out to post as they call it, we’re required to go Ambassador School, also known as ‘Charm School’ where they teach you to be charming – which didn’t work – and to speak in riddles, but they also tell you early and often, you must not develop too close an attachment to the country in which you’re posted. In fact, they tell you not to fall in love with the country that you’re posted to. I defy anyone to not spend the last 20 months as I have in this country and not develop a huge attachment to it. It is a great country and great people, and I’ve been proud to live here amongst you.

Also, speaking personally, you’ve probably seen my reaction in the press to the tweet that Chinese deputy spokesperson for the Ministry of Foreign Affairs recently made. It is worth repeating: spreading disinformation through fabricated images and disingenuous statements that incite further violence is not appropriate diplomacy. France, Germany, the United Kingdom, New Zealand, and other countries all agreed it exceeded the bounds of acceptable diplomatic discourse.

In fact, as I’ve said before, the PRC Government would do well to follow Australia’s responsible example and disclose to the world all it knows about the origin of the COVID virus.  And the world can only wish that the Chinese Communist Party were to follow Australia’s lead and bringing the same degree of transparency and accountability to credible reports of atrocities against the Uighurs in its own country.

I say my visit comes at an opportune time. That’s for a couple of reasons.

The first is that we’re nearing the end of what I’ve called – 2020 a “Biblical Year,” with bushfires, with smoke, the COVID-19 pandemic, a global recession, and increased geostrategic competition. And this year, I think it proves beyond dispute, that our historic partnership matters more than ever.

Perhaps the clearest symbol of this was this year’s Australia-U.S. Ministerial Consultation – or AUSMIN – when Foreign Minister Payne and Defense Minister Linda Reynolds travelled to Washington despite COVID and their having to spend two weeks in quarantine upon their return.

Minister Payne has said on several occasions, it was the most consequential AUSMIN meeting in memory. We made strides in building secure, trusted supply chains; we made strides in countering disinformation and malicious activity in cyberspace; and we made strides in bringing a new focus on the way our defense forces work together in the Indo-Pacific region.

I also note and commend that this year – despite COVID – more than a thousand U.S. Marines were able to take part in the Marine Rotational Force Darwin Exercise. That’s despite spending two weeks in quarantine before we shipped them over here, then they spent another two weeks in quarantine in Darwin when they arrived. And they did that with the support of the Commonwealth Government and the Northern Territory Government. That shows how our governments work together to advance our common goals.

The second reason why this is an opportune time has to do with the U.S. political calendar.  As some as you may have known, may have noticed, on November third, the people of the United States participated in a national election – the most important thing a democracy does. More Americans than ever voted on November third. I am a political appointee of the current President, and given the expected decision of our Electoral College next Monday December 14, I anticipate returning to Washington before January 20.

Hence, this is likely the last time I’ll be in Perth in my official capacity as Ambassador. So, let me make a simple observation. The U.S.-Australia alliance has enjoyed a strong, bipartisan support for decades. The U.S. bipartisan support for the alliance is strong. We had more U.S Congressmen and Senators visit Australia last year from both parties than any time since World War II.  Our alliance will endure. And more than endure – our alliance will thrive.

When I depart, it will be with confidence, because the democratic ideals that Australia and the United States share give me great optimism. This alliance is not one of convenience. Our alliance is not one of transaction. It was built over a century on shared values.  It transcends political divides.  And it will endure long after I’m gone.

I came to Australia with three priorities: strengthening the alliance, deepening our economic partnership, and supporting Australia’s Step-Up in the Pacific.

It gives me great pride that we’ve made substantial progress on each of these. And let me focus just a little bit, on these remarks today, on the economic side of the relationship.

There’s a pervasive narrative that Australia relies on the United States for its security but is dependent on China for its prosperity.  The first half of the statement is true – that’s what alliances are all about – we depend on one another for our security.

Though that narrative understands the degree to which my country the United States depends on Australia, on our allies, on our security, of which there are none closer than Australia.

But let me address the second half of the statement: the assertion that Australia quote unquote depends on China for its prosperity.  I submit to you that’s a narrative that is not just simplistic but is fundamentally near-sighted. It overweighs trade to the detriment of investment. And thus sells both our countries short.

I know there’s no better place – and perhaps no more provocative place – for me to deliver this message than in Perth, Western Australia, which is often cited – justifiably so – as the center of Australia’s economic relationship with China. And there is no better audience than at an event run by the American Chamber of Commerce.

That report demonstrated, conclusively, that the United States is Australia’s most important economic partner.

Let me suggest a distinction. Trade is important of course but it’s largely transactional. Investment by contrast is a sign of confidence, of trust, and of shared values for the long-term.

Let me cite a few examples from Western Australia.

Chevron is far from alone. Many people in this room represent other companies such as Alcoa, Bechtel, Caterpillar, Cisco, ConocoPhillips, and Baker Hughes just to name a few that have brought investment, equipment, and know-how to Western Australia’s economy.

As Minister Pitts mentioned, the Australian and U.S. Government have partnered to ensure the reliable supply of critical minerals essential to the powering of our economy. That’s something President Trump and Prime Minister Morrison specifically recommitted to during the Prime Minister’s historic state visit to Washington this past September. In this regard, I fondly remember joining Premier McGowan and Minister Birmingham to visit Kemerton – Daniel O’Shea is here – we did a groundbreaking of Albemarle’s new lithium hydroxide processing plant. Albemarle’s investment is an excellent example of potential for greater cooperation between our two countries in critical minerals.

I’m bullish on the potential for the United States and Australia to, together, lift our economies out of the COVID recession. Together, we have committed to build a network of trusted partners of strategically reliable supply chains because it is clearer than ever that in the post COVID world that friends matter – friends you can trust, friends who share your values, your interests, and who are there for you in good times and in bad times.

A great example of that post-COVID future is based upon the fact that the United States and Australia have a proud tradition of government to government cooperation on research and development. This cooperation was recently evidenced by discussions between Minister Karen Andrews and the director of our White House Office of Science and Technology. That discussion focused on working together cooperatively, government to government, on artificial intelligence, quantum information studies, and ocean exploration.

These are amongst the several types of frontier technologies that the Prime Minister and President talked about September a year ago which will be increasingly important in the post-COVID world.

And only two months ago in September, Australia signed the Artemis Accords, which will guide space exploration cooperation into the future. Just as Australia’s tracking stations at Honeysuckle and Parkes helped achieve and document America’s first steps on the Moon in 1969, our “great leap” in space will be together— as we work together will put the first woman and the next man on the Moon, and then on Mars.

This next wave of space exploration is important in its own right. But as many of you know it’s also important because the first lunar exploration – our Apollo program – bought manifold economic and scientific benefits which fuel our economies for the next 50 years and we think the Artemis Accords will spark incredible technological and scientific advancements which will turbo-charge our economies for the next 50.

Some of that work is happening right here as we speak, right now, in Perth’s central business district. Woodside for example is collaborating with NASA to develop robots that will improve workplace safety, reliability, and efficiency in challenging environments, both on earth and in space.

Our shared commitments to pushing the frontiers of technology means that our relationship will continue to create the high-tech, highly paid jobs of the future in both countries.

And I have one last example. Bill mentioned that I’m the proud father of three accomplished daughters. One of my daughters reports to me, reliably since she was there, that our White House continues to serve Australian wine to do our own little bit in supporting. She attended one of the Christmas parties there last night.

On that note, let me conclude by restating the narrative.