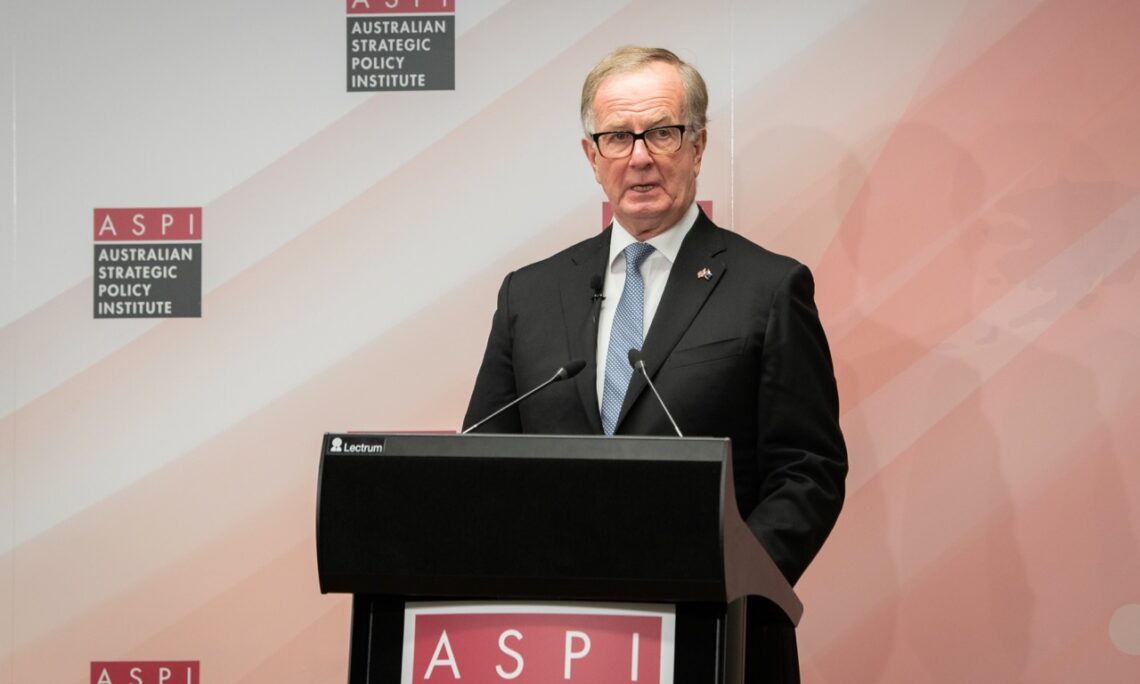 It’s great to be back here at ASPI.

On behalf of U.S. Mission Australia, just let me formally say that we value our relationship with ASPI—the Australian Strategic Policy Institute is a great friend and a great source of information, and inspiration.

It’s nice to be back. I was first here two years ago, meeting with Peter up in his office, ostensibly undercover, but trying to ascertain whether or not I wanted to accept the President’s invitation to be nominated to be the United States Ambassador to Australia.

I never told Peter formally while I was here, but I think after asking him 30 questions in 30 minutes, mostly about the foreign policy establishment in Australia, he figured it out pretty quickly, as did Dr. Brendan Nelson, Sir Angus Houston, and the others with whom I met.

I’ve given a speech here, a year ago, and I think the world has also well and truly changed since last August.

Back then, in August a year ago, I infamously said—and in fact, I was almost sent home by DFAT for saying—that I wished that Australia had the confidence in itself that the United States has in Australia.

I’m here today to pay my respects to Australia’s confident leadership in the world.

In the past year, Australia has led the way in confronting foreign interference, disinformation, and cyber aggression.

And Australia has called for an investigation into the origins of the COVID virus, and for Taiwan’s inclusion in the World Health Assembly.

The Australian Defence Strategic Update presented a clear-eyed view of Australia’s role in the Indo-Pacific region. And the Australian Step Up in the Pacific has been less of a step and more of a leap, as we sit here today.

And all this in the face of not-so-subtle diplomatic pressure and economic coercion from the People’s Republic of China.

Credit is due to Prime Minister Scott Morrison, Foreign Minister Marise Payne, Defense Minister Linda Reynolds, and their teams. And we should also give credit to the Labor Party frontbench, which has been broadly supportive of Australia’s foreign policy direction.

And in particular, I want to thank our host today, the Australian Strategic Policy Institute. More than any other institution, ASPI has elevated the world’s understanding of the threat that the Chinese Communist Party poses to the security and prosperity of the Indo-Pacific region and the world.

Journalists and news organizations in Australia, in the United States, and indeed around the world regularly rely on ASPI’s pioneering work in exposing the PRC’s aggressive methods for expanding its malign influence abroad and repressing its people at home.

My friends at ASPI, the CCP is not too pleased with your work—they’ve made that clear with the subtlety of a sledgehammer.

They’ve made videos casting aspersions on your funding. And of course, ASPI has always been very transparent about its funding sources—we would love to see the same level of transparency from institutions affiliated with the PRC.

And recently, they banned Alex Joske from entering the PRC—which is sort of like me banning Beyoncé from attending my next birthday party. I don’t think she was planning on going, and neither was Alex.

More seriously, it has been a pleasure for me to witness Australia’s growing leadership firsthand.

As we often say inside the United States Government: “When Australia speaks, the world listens.”

The Australian-U.S. alliance has a long and illustrious history. And while there is a lot to celebrate in our past, I believe the best is yet to come.

So today, I will focus on the future of the alliance, particularly on the areas I believe will be the most important for the peace and prosperity of our nations, the region, and the world.

We have seen the COVID pandemic devastate lives and livelihoods; we have seen geostrategic competition intensify in our region; and we have seen disinformation run rampant.

In the face of those challenges, Australia is more vital than ever.

The pandemic has brought a lot of challenges—some emerging and some enduring—into sharp relief.

One issue—which is frankly, existential in nature—is malicious behavior in cyberspace.

That includes the problem of having untrusted vendors like Huawei in our 5G networks— something again, that Australia was quick to wake up to, and that the United States has been addressing through our ‘Clean Network Initiative’.

And the most pernicious problem in this particular arena, in my opinion, is state-sponsored disinformation campaigns.

Democracies are founded on openness and transparency, and the free exchange of ideas.

Authoritarian regimes seek even as we speak, to exploit these principles in your country, and mine, and throughout the world.

Today, vast networks of bots amplify PRC and Russian propaganda and disinformation, seeking to sow chaos and undermine confidence in our democratic institutions and values.

Those malign gray-zone tactics go hand-in-hand with increased PRC aggression in the Indo-Pacific region. Australia and the United States are committed to addressing those challenges together.

At the recent AUSMIN 2+2 ministerial consultations, which I was honored to attend, our countries announced a new joint working group between the Department of Foreign Affairs and Trade in Australia, and the State Department in the United States, that will monitor and respond to false narratives propagated by bad actors.

Our nations also established at AUSMIN a bilateral Force Posture Working Group to develop recommendations that will advance force posture cooperation in the Indo-Pacific to secure a secure and stable region, and deter coercive acts and the use of force.

Another issue that has loomed large during my time, my eighteen months as Ambassador, is the matter of critical mineral supply chains.

Critical minerals—minerals essential to our economic and national security—are used in everything from fighter jets to the smartphones sitting in your pockets, which you just turned off.

Most of them, most of those critical minerals, are processed in one country: The People’s Republic of China.

Near monopolies on the supply of critical minerals—and on pharmaceuticals, essential medical equipment, and critical technologies—distort the market and make everyone else less secure and less prosperous.

At AUSMIN, Australia and the United States committed to collaborating on supply chains, so they are resilient against future pandemics, against economic coercion, and isolated from the use of forced labor and substandard environmental safeguards.

And just last week, President Trump issued an Executive Order to address the threat to the United States posed by reliance on critical minerals produced and processed by our adversaries.

Let me note that the President’s Executive Order specifically calls out Australia as an ally with which we will work to reduce this vulnerability.

Together, and with other like-minded partners, we can secure more robust, more transparent, and more standards-based supply chains.

The issue of critical minerals is one of the clearest examples of how our economic security and national security are one and the same.

Economic security is a fundamental pillar of national security.

In a time of intensifying geostrategic competition, trusted economic partners are essential.

The American Chamber of Commerce in Australia and Deloitte recently put together an excellent report which shows that American trade and investment contributes a staggering seven percent of Australian GDP each year.

And it’s not just the amount of U.S. investment, impressive as it is. It’s also the important, growth-oriented sectors where the United States is investing that matters.

For example, we together are aiming to put the first woman and next man on the Moon by 2024.

Our commitment to pushing the frontiers of technology means that our relationship will continue to produce the jobs of the future.

Of course, there is more that can be done, and should be done. And we will figure out how to do that together.

Our unique economic relationship will be vital to the future prosperity of both our countries as we look ahead to a post-COVID world.

Together, we can generate economic growth and stability for our citizens.

And together we can drive open, innovative, and resilient markets.

And together, we can bring more jobs, productivity and solutions to our region and the world.

In fact, the United States just announced more than 200 million U.S. dollars in new funding as part of our Pacific Pledge. This will support the region’s response to the pandemic, as well as a range of programs that will strengthen our Pacific partners, and make the Pacific region safer and more prosperous for all.

When I spoke at ASPI last year, I had only been Ambassador for five months.

And yet I had heard countless times in those five months from too many Australians that Australia was a middle power. Any praise of Australia’s foreign policy was hedged, and was qualified—Australia was doing well considering its size and its population; Australia was punching above its weight.

But from my perspective, there are no weight classes in foreign affairs. And power is not calibrated solely by military might.

You are influential, or you are not.

Australia is clearly playing an important “great power” role—when and where it chooses to engage—through coalition-building and diplomacy, not arm-twisting or coercion.

Nations in this region and throughout the world recognize that Australia has been a force for good for decades. And the United States of America absolutely respects that.

Because the relationship between Australia and the United States is not one of convenience. It’s not a transactional relationship. Rather, it is built on our shared interests and our foundational values—our belief in democracy, individual freedom, human rights, and the rule of law.

And as we look to the future, this relationship will be more important than ever.

Our enduring relationship has an essential role to play in solving complex regional and global challenges in areas like health security, cybersecurity, and space exploration—areas that will be crucial to our joint future.

Only by maintaining and growing our partnerships with like-minded democracies can we ensure that our rules-based international order continues to provide peace, prosperity, and security for all nations.

As long as the United States and Australia continue to work together, I am—and I will remain—confidently optimistic about the future.

Thank you and I’m happy to take your questions.