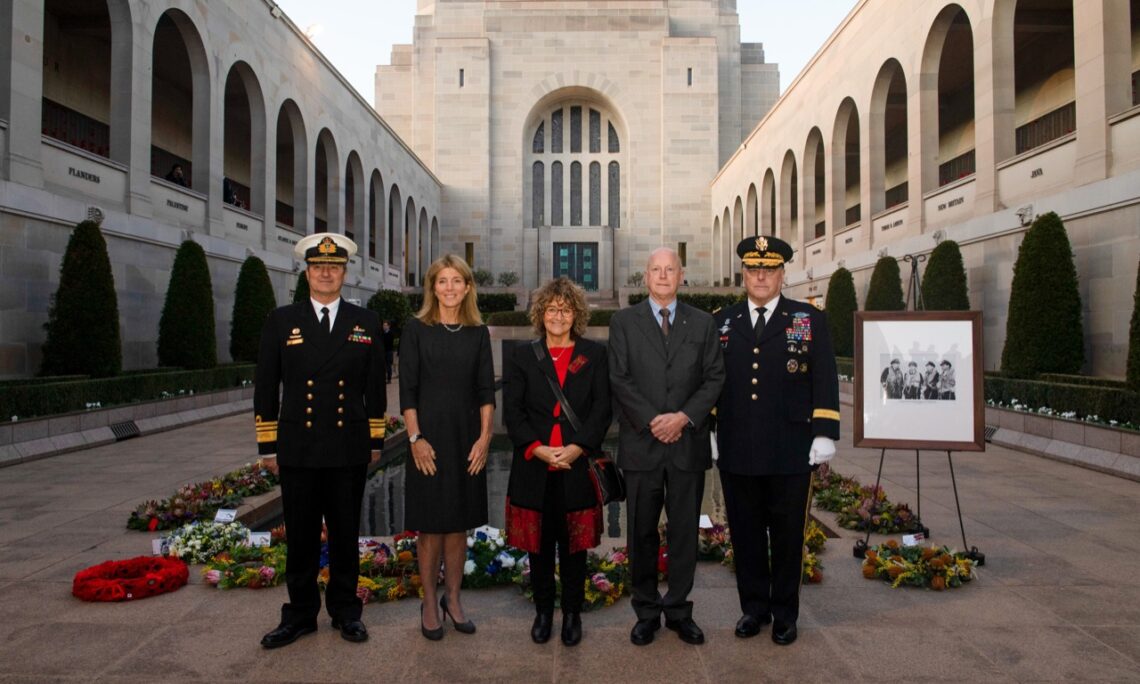 Ambassador Caroline Kennedy and General Mark Milley, Chairman of the U.S. Joint Chiefs of Staff, met with two Australian veteran Coastwatchers and their family members at the Australian War Memorial yesterday.  The Ambassador reaffirmed the strength of the U.S.-Australia alliance and expressed her gratitude for the service and sacrifice of Australians during World War II, highlighting the Coastwatchers, who played a critical role in rescuing President John F. Kennedy after his patrol torpedo boat was destroyed.

In their meeting, Ambassador Kennedy said “It was a great honor to meet two Australian Coastwatchers, who played an essential role in keeping the region secure during World War II. I owe personal gratitude to an Australian Coastwatcher and two Solomon Islander scouts who saved my father’s life. These men represent the best of their generation and are an amazing example of the bonds of the U.S.-Australia alliance.”

“I was deeply honored to participate in a wreath-laying ceremony with Ambassador Kennedy and meet a few Australian Coastwatchers. The U.S-Australia alliance remains just as strong as when we fought side-by-side more than 70 years ago. The World War II generation of Americans and Australians bequeathed us a set of freedoms, and we have an obligation today to uphold their sacrifices,” said General Mark Milley, Chairman of the Joint Chiefs of Staff, the highest ranking military officer in the United States.

“The event was a very special and personal acknowledgement by Ambassador Kennedy and the US government of the role we had as Aussie Coastwatchers eight decades ago. I am proud at 98 to meet Her Excellency and share Coastwatcher stories. The time I spent in the Solomons and other locations as a Coastwatcher is as vivid today as it was then. It has been an honor to participate in this memorial event,” Australian World War II veteran Mr. Ronald (Dixie) George Lee.

“’It was an amazing experience to meet with Ambassador Caroline Kennedy and extremely pleasing to speak with her during the commemorative wreath-laying. As a Coastwatcher, I have long been aware of the role played by the Australian and Solomon Islander Coastwatchers Reg Evans, Biuku Gasa and Eroni Kumana in rescuing then Lieutenant John F. Kennedy and his crew after their Patrol Torpedo Boat was cut in two by a Japanese destroyer. So I was honored to receive the Ambassador’s kind acknowledgement of our Coastwatching role in the war and recognition of our rescue of the future President,” Australian World War II veteran Mr. James Burrowes OAM.

Ambassador Kennedy presented Ms. Ash and Mr. Burrowes with replicas of the coconut that President Kennedy used to send a rescue message following the destruction of his patrol torpedo boat, PT-109.

“Our wonderful new U.S. Ambassador Caroline Kennedy has shone a very personal light on the special role of Australian Coastwatchers in World War II.  I was privileged to meet her and General Milley and to lay a wreath on behalf of my father, one of the last surviving Coastwatchers.  The tour of the Australian War Memorial was very moving.  No doubt Ambassador Kennedy will strengthen and bring warmth to the close bond between our two countries,” Ms. Eve Ash, daughter of Australian World War II veteran Mr. Ronald George “Dixie” Lee.

“I am truly humbled to represent my Coastwatcher father Jim Burrowes on this specific commemoration to the Coastwatchers with our U.S. allies and with such a personal connection. The bravery and sacrifice of the Coastwatchers is inspiring to the next two generations of Australians who have enjoyed relatively peaceful enjoyment and prosperity. We express our deep gratitude and indeed, I dips me lid! And Lest We Forget,” Mr. Tom Burrowes, son of veteran Mr. James Burrowes OAM, at the Australian War Memorial.

Ambassador Kennedy, General Milley, Ms. Ash, and Mr. Burrowes then participated in the Last Post Ceremony and laid a wreath at the Pool of Reflection.

Ambassador Kennedy’s engagements at the Australian War Memorial reflect Australia’s status as a vital ally, partner, and friend of the United States.

“The U.S.-Australia alliance plays a vital part of promoting peace and stability in the Indo-Pacific region and around the world. I look forward to working to advance our alliance during my time as Ambassador.”  – Ambassador Caroline Kennedy