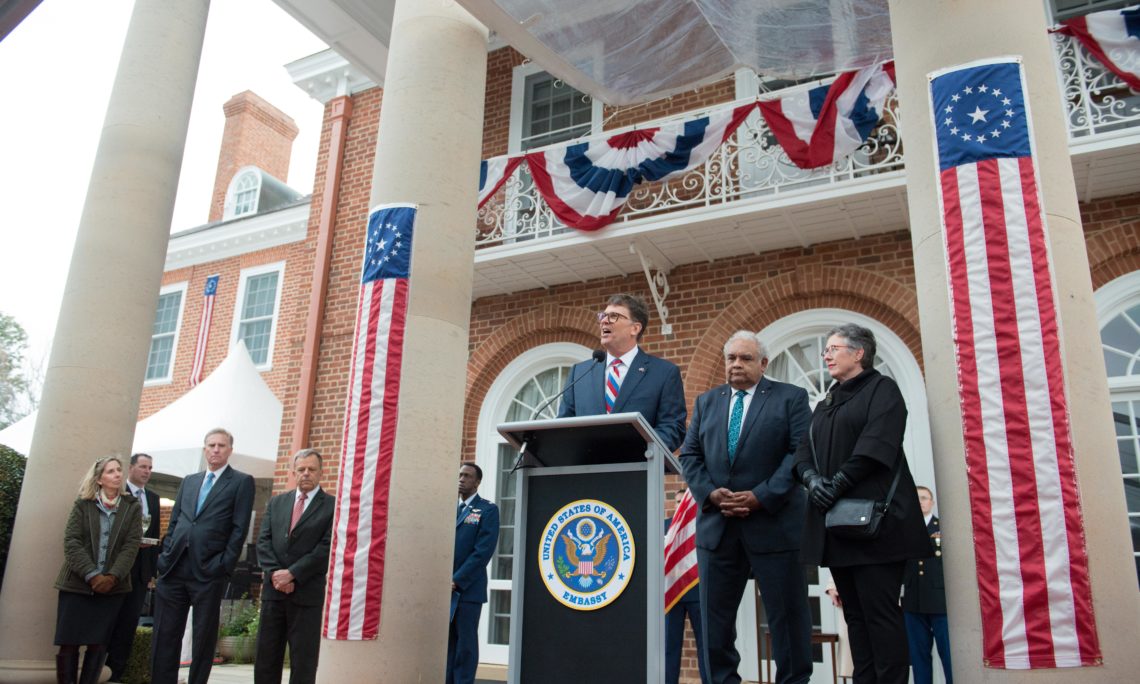 This is my third and, sadly, my final U.S. Independence Day as Ambassador to Australia.

Before I arrived here three years ago, I knew the United States and Australia were close. But I didn’t know how close.

I knew our ties were deep. But I didn’t know how deep.

I knew our cooperation was vast. But I didn’t know that it extended to the furthest reaches of our universe.

First, we both strive for equality.

In Australia, each and every person is entitled to a fair go. In America, all men and women are created equal. Equality of opportunity nourishes both of our innovative, knowledge-based economies.

This core value – equality – is the beating heart of our vibrant democracies.

Second, we cherish freedom and are willing to defend it.

The United States and Australia, both, have not only fought for our own freedoms, but have laid down our lives for the freedom of others.

Together, we have shed blood and treasure in freedom’s name. Today, brave American men and women stand shoulder-to-shoulder with their Australian mates, all over the world, upholding freedom’s flag. I salute them on our independence day.

Third, we believe in honor.

We honor our past by paying respect to and learning from our ancient indigenous communities and saluting the sacrifice of all those elders – past and present – who have made the world we enjoy possible.

We honor our present, by embracing the diversity from which we draw our strength and fulfilling our responsibilities as allies and as global citizens.

And, we honor our future, by tackling global challenges together to provide the next generation a better world than the one we were given.

Living outside the United States has reminded me that the words of the Declaration of Independence were not just read by Americans; they resonated far beyond our small cluster of colonies.

“Life, liberty, and the pursuit of happiness” are not just for Americans, they are inalienable rights for all.

As the United States celebrates its 240th birthday this Fourth of July, let us remember and work so that people of all nationalities, races, and creeds can freely speak their minds, follow their faiths, and nurture their dreams; for themselves and their children.

Few know this better than my friend Professor Tom Calma, Chancellor of the University of Canberra and Co-Chair of Reconciliation Australia, who has honored us with his presence today and for whom I have a very special, very personal gift.

Tom and Heather, please join me up here.

For over 40 years, Tom has championed the rights, responsibilities, and empowerment of Aboriginal and Torres Strait Islander peoples.

He is an Aboriginal elder of the Kungarakan tribal group, a member of the Iwaidja tribal group, and an indefatigable proponent of health, social justice, inclusion, and equality.

In a world where too often the headlines are stolen by hate and intolerance, it is more important than ever to raise up the voices that inspire love instead of hatred, respect instead of rancor.

The voices that speak to the core values shared by the United States and Australia – human dignity and equality under the law for all irrespective of gender, religion, or race.

You, Tom Calma, are one such voice.

Your voice echoes that of the father of the American civil rights movement Dr. Martin Luther King Jr., a man who held up a mirror to America and asked our country to live its values.

The Martin Luther King, Jr. Memorial in Washington, D.C. honors a man of conscience and his message of freedom, equality, justice, and love.

This flag was flown over King’s memorial, and today I present it to you.

Through your work to improve the lives of all Australians and particularly Aboriginal and Torres Strait Islander communities, you have answered King’s call “to make a career of humanity.”

Inscribed on the MLK Memorial in Washington and included on the rug in the Oval Office is the quote, “the arc of the moral universe is long, but it bends towards justice.”

Tom Calma, with your tireless dedication and indomitable spirit, you have helped bend the arc of the moral universe towards justice.

May God bless each of you, and long may God continue to bless the United States of America and her foremost ally Australia.