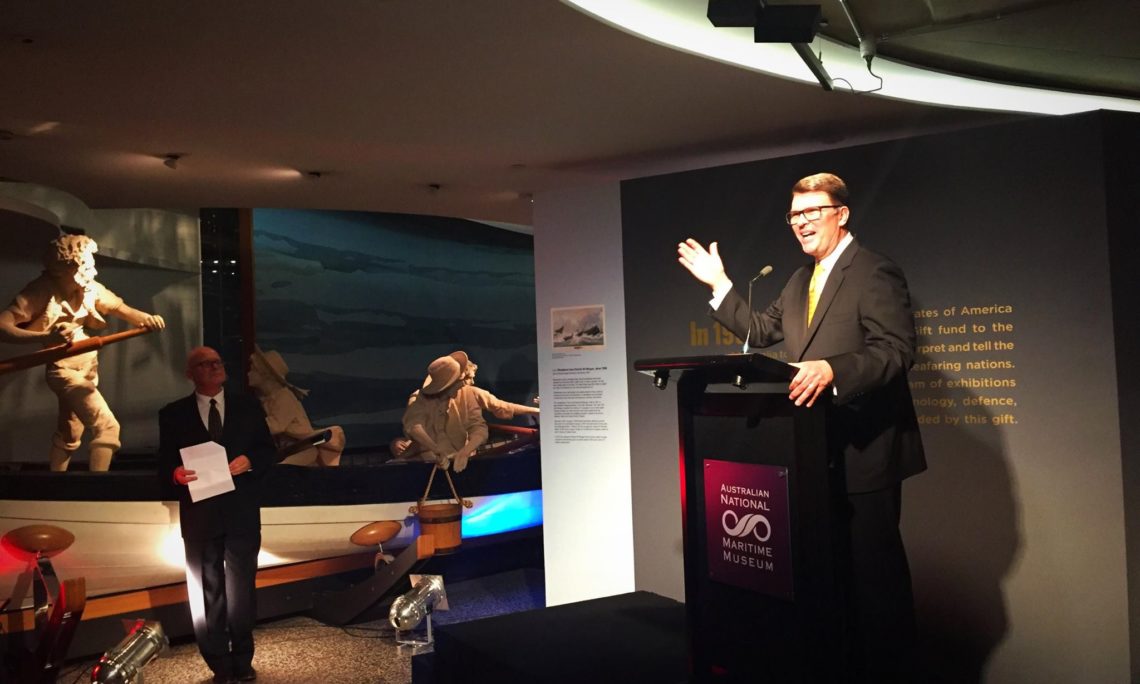 It is an honor to join you in celebrating not just this incredible exhibition, but the close bond between two extraordinary Pacific nations.

Before us is a reminder of the history, beauty, and promise that unites the United States and Australia. Ours is a story that unfolds over more than two centuries; it is a story of explorers, adventurers, pioneers, and soldiers; of entrepreneurs and innovators. And, it is a story of the sea that connects us.

The first Americans to glimpse Australia may have done so from the deck of the HMS Endeavour when it sailed in to Botany Bay in 1770. Captain Cook’s crew included New York- born John Thurman, shanghaied from an American sloop in the Maderia Islands. Subsequent American visitors to Australia made the trip voluntarily.

American whalers and traders eagerly entered in to commerce with a young Australia; the Philadelphia arrived in Sydney Harbor in 1792. The CSS Shenandoah, a Confederate ship responsible for the sinking of 38 Union ships across three oceans, made a celebrated port call in Melbourne in 1865, much to the consternation of the U.S. Consul at the time.

Throughout the nineteenth and twentieth centuries, in times of war and times of peace, ships crossing the Pacific in both directions helped to cultivate the shared economic and cultural ties that persist to this day.

These ships traveled routes established long ago by our Indigenous ancestors – seafaring peoples who charted the Pacific currents in voyaging canoes like the Hokule’a. When the Hawaii-based crew of the Hokule’a arrived in Sydney Harbor last year, they were welcomed by Australia’s First Nations as cousins, right here at this Museum.

In war time, our navies fought for freedom in the Pacific. In 1942, the Battle of the Coral Sea not only turned the tide for the Allies, it proved how powerful the United States and Australia could be as a combined force. Just a few months later, the Australian navy escorted U.S. Marines to Guadalcanal. And, Australians gave a warm welcome to those war-weary Marines, my father among them, when they arrived back in Australia after a hard fought victory.

And, today, while enjoying an era of peace and prosperity made possible by the U.S.-Australia alliance, our maritime relationship helps to define our joint leadership in the Asia-Pacific.

Together, we will uphold a principled, rules-based international order and protect freedom of navigation.

Together, we will respond to the humanitarian crises that arise when the sea surges and storms.

Together, we will preserve delicate maritime ecosystems and harness the power of the ocean, responsibly. Our joint efforts will be on display at the Our Oceans Conference this September in Washington, D.C. hosted by Secretary of State John Kerry.

In the twenty-first century, we will prove ourselves worthy of the legacy of our American and Australian forebears who plied the Pacific confident in the amity between our shores.

I will end this evening with the words of John F. Kennedy, from a speech he gave before the America’s Cup Races in September 1962, the year, it so happens, Australia made its first challenge for the prize.

“All of us have in our veins the exact same percentage of salt in our blood that exists in the ocean, and, therefore, we have salt in our blood, in our sweat, in our tears. We are tied to the ocean. And when we go back to the sea – whether it is to sail or to watch it – we are going back from whence we came.”