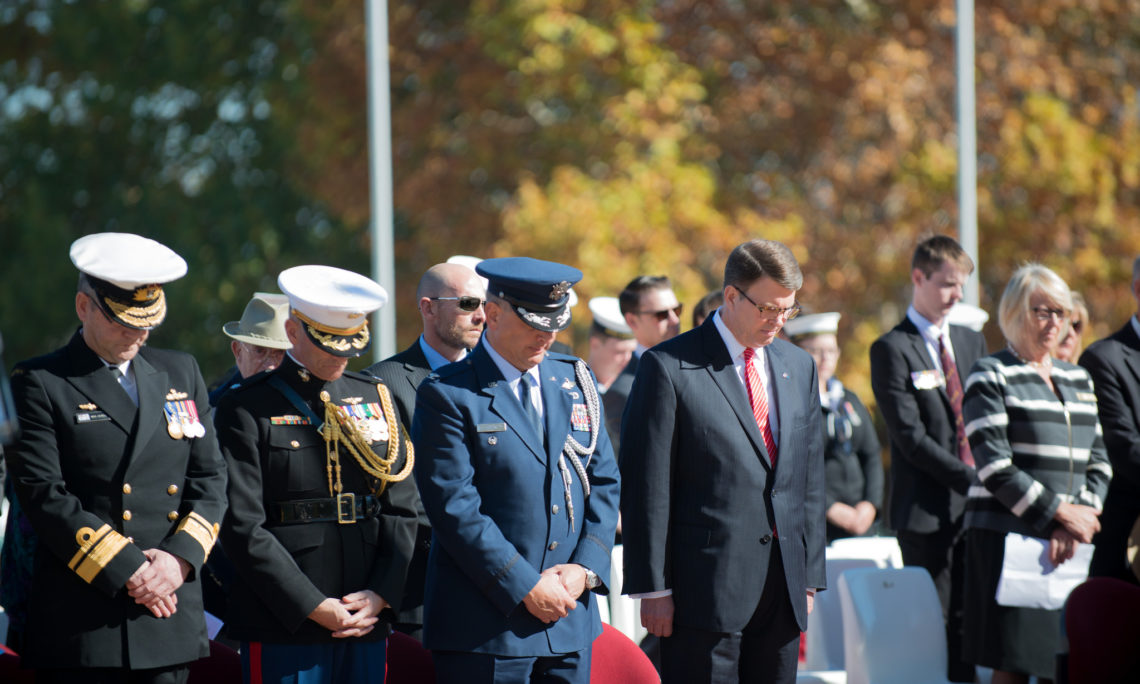 Veterans and Members of the Australian and the American Militaries;

On May 8, 1942, the Allied strategic victory in the Battle of the Coral Sea changed the course of history.

Without Coral Sea, there could have been no Midway, no Guadalcanal, and no victory in the Pacific. The last 70 years of stability and prosperity in the Asia Pacific region would have been unimaginable.

We won because of the strength of character, dedication, and sacrifice of the U.S. and Australian defense forces. The story of the USS Neosho is one of many stories of courage from the Coral Sea.

A survivor of the attack on Pearl Harbor, this vitally important fuel tanker sustained the American ships engaged in the battle. It retreated hundreds of miles away from the battle to preserve its precious cargo. But, the battle found Neosho.

It suffered seven direct hits from Japanese aircraft and a suicide dive – shooting down three of the attackers in the process. Superb seamanship kept the Neosho afloat; though lost and defenseless.

Four days after the battle, the Royal Australian Air Force found the Neosho, with 123 surviving seaman aboard. Another four men from the Neosho survived nine days in an open life raft without food, water, or shelter. Hundreds of men were lost.

Only upon rescue, did the Neosho’s crew learn that the American and Australian forces had turned back the Japanese, ending their southward expansion in World War II. Saving Australia from invasion.

The cost – the USS Lexington, three other ships, and 69 U.S. and Australian planes; 656 brave men, Americans and Australians. But, most importantly, Japan suffered its first defeat of the war – losing its two newest fleet carriers, eight smaller ships, 92 planes, and the strategic and offensive initiative in the Pacific.

The fortitude of these brave and noble few forged in blood an alliance second to none. Their sacrifice is the unshakeable foundation upon which our alliance stands. An alliance dedicated to shared values – duty, courage, mateship, and above all, freedom.

It is now my honor to read to you a message from President Obama.

“I send greetings to the people of Australia on the 74th anniversary of the Battle of the Coral Sea.

Just months after the attack on Pearl Harbor, our two countries joined together in an unprecedented partnership that left the Allies victorious in the four-day Battle of the Coral Sea. While the Battle was a turning point in the Pacific War and laid the foundation for an Allied victory in 1945, it also demonstrated the power of cooperation to steer the course of history. Our nations will be forever grateful to those who gave their lives for the cause of freedom, and on this day, we remember their sacrifices – along with those of their families.

As the world faces threats of violent extremism, climate change, emerging epidemics, and weapons of mass destruction, the steadfast alliance between the United States and Australia remains a bedrock for security and prosperity in the Asia-Pacific. Seventy-four years after our sailors and aviators gave of themselves to advance peace and security, our countries remain committed to our common values and still share an extraordinary bond. As you come together to reflect on our interconnected past, I wish you all the best.”

In closing, let us rededicate ourselves to remembering those who gave their all at this critical turning point of history.

God bless them and their families.

God bless Australia and the United States of America.